'Una grande famiglia (English: The family) is an Italian television TV series produced for Rai 1, the flagship television channel of RAI, Italy's national public service broadcaster, and the most watched television channel in the country. It is one of the most successful series in Italy. The series has also been translated into French, German and Polish.

Rai 3 is an Italian free-to-air television channel owned by State broadcaster RAI. It was launched on 15 December 1979 and its programming is centred towards cultural and regional programming. It has always been considered the most left-leaning channel of Italian public television; its direct competitor to Mediaset's Rete 4.

Orchidea De Santis is an Italian television and film actress.

Lino Banfi is an Italian film actor and presenter. He has appeared in more than 100 films since 1960.

Barbara Livi is an Italian actress of cinema, television, and theatre. She is best known for her role of Martina Morante in the 5th sequel of the long-running drama series Incantesimo, which was televised on Rai Uno. NormalMan is an Italian radio and television series started in 2006. It became famous to the general public by comedians Lillo & Greg in their radio program "610 ", broadcast on Rai Radio 2 from 2004. In 2006 it lands on television on satellite channel GXT enough to make a second season in 2007. It came available on K2 television channel in late 2009. It is starred by a character created for comics by Lillo in 1991.

Massimo Giletti is an Italian television host and journalist.

Rai Fiction is an Italian production company founded in 1997. It is owned and operated by Radiotelevisione Italiana (RAI), the national broadcasting company of Italy.

David Bellini was an Italian screenwriter, television writer, story editor and docu-director. Screenwriter of the famous TV series Un medico in famiglia, head writer of the Italian programs: Tetris and Festa italiana, creator and director of a number of docu-series such as Passaggi Segreti and Tra cielo e terra.

Uno di noi is an Italian television series, airing on Rai Uno in 1996. The series was rerun on Rai Premium during the summer of 2011.

Cristina Del Basso is an Italian model, showgirl and actress.

Era mio Fratello is a two episode television miniseries that aired in 2007 on Rai Uno. The first episode aired on 30 September 2007 in Italy and the second episode aired on 1 October that same year. It is the first Italian television series having 'ndrangheta as main theme. Filming took place in Calabria, in the cities of Reggio Calabria, Palmi, Catona, Melito and Pentedattilo. The La Repubblica television critic Antonio Dipollina appreciated the miniseries, commenting that it has "the same rhythm and language of the most modern crime series".

This is a list of Italian television related events from 2009.

This is a list of Italian television related events from 2012.

Sonia Grey, known as the stage name of Sonia Colone, and Maria Michela Mari is an Italian actress and television presenter She began her acting career in 1988 and has been performing since. Sonia Grey is vegan and lives a healthy life, as she describes on her website. 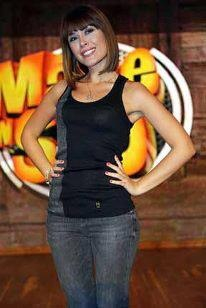 Fatima Trotta is an Italian actress, comedian and television presenter.

The Spaghetti Family is an Italian animated television series created by Bruno Bozzetto and produced by The Animation Band, Mondo TV and Rai Fiction, and animated by SEK Studio. It debuted on Rai 3 in December 2003.

Maria Teresa Ruta is an Italian showgirl and television presenter.