Last updated September 07, 2021
Computing by a wide range of new or unusual method

Unconventional computing is computing by any of a wide range of new or unusual methods. It is also known as alternative computing.

The term of "unconventional computation" was coined by Cristian S. Calude and John Casti and used at the "First International Conference on Unconventional Models of Computation", [1] held in Auckland, New Zealand in 1998. [2]

The general theory of computation allows for a variety of models. Historically, however, computing technology first developed using mechanical methods, and eventually evolved into using electronic techniques, which remain the state-of-the-art. Further development may require development of new technologies.[ why? ]

Historically, mechanical computers were used in industry before the advent of the transistor.

Mechanical computers retain some interest today both in research and as analogue computers. Some mechanical computers have a theoretical or didactic relevance, such as billiard-ball computers, while hydraulic ones like the MONIAC or the Water integrator were used effectively. [3]

While some are actually simulated, others are not[ clarification needed ]. No attempt is made[ dubious – discuss ] to build a functioning computer through the mechanical collisions of billiard balls. The domino computer is another theoretically interesting mechanical computing scheme.[ why? ]

Most modern computers are electronic computers with the Von Neumann architecture based on digital electronics, with extensive integration made possible following the invention of the transistor and the scaling of Moore's law.

Unconventional computing is, according to a[ which? ] conference description, [4] "an interdisciplinary research area with the main goal to enrich or go beyond the standard models, such as the Von Neumann computer architecture and the Turing machine, which have dominated computer science for more than half a century". These methods model their computational operations based on non-standard paradigms, and are currently mostly in the research and development stage.

This computing behavior can be "simulated"[ clarification needed ] using the classical silicon-based micro-transistors or solid state computing technologies, but aim to achieve a new kind of computing.

These are unintuitive and pedagogical examples that a computer can be made out of almost anything.

Reservoir computing is a computational framework in the context of machine learning. The main advantage of this unconventional computing framework is that it facilitates a simple and fast learning algorithm in addition to a hardware implementation, known as a physical reservoir computer.

Some biological approaches are heavily inspired by the behavior of neurons.

Ternary computing is a type of computing that uses ternary logic (instead of binary logic).

An analog computer or analogue computer is a type of computer that uses the continuously variable aspects of physical phenomena such as electrical, mechanical, or hydraulic quantities to model the problem being solved. In contrast, digital computers represent varying quantities symbolically and by discrete values of both time and amplitude.

Computing is any goal-oriented activity requiring, benefiting from, or creating computing machinery. It includes the study and experimentation of algorithmic processes and development of both hardware and software. It has scientific, engineering, mathematical, technological and social aspects. Major computing disciplines include computer engineering, computer science, cybersecurity, data science, information systems, information technology and software engineering.

Neuromorphic engineering, also known as neuromorphic computing, is the use of very-large-scale integration (VLSI) systems containing electronic analog circuits to mimic neuro-biological architectures present in the nervous system. A neuromorphic computer/chip is any device that uses physical artificial neurons to do computations. In recent times, the term neuromorphic has been used to describe analog, digital, mixed-mode analog/digital VLSI, and software systems that implement models of neural systems. The implementation of neuromorphic computing on the hardware level can be realized by oxide-based memristors, spintronic memories, threshold switches, and transistors.

Fluidics, or fluidic logic, is the use of a fluid to perform analog or digital operations similar to those performed with electronics.

A chemical computer, also called a reaction-diffusion computer, Belousov–Zhabotinsky (BZ) computer, or gooware computer, is an unconventional computer based on a semi-solid chemical "soup" where data are represented by varying concentrations of chemicals. The computations are performed by naturally occurring chemical reactions.

A billiard-ball computer, a type of conservative logic circuit, is an idealized model of a reversible mechanical computer based on Newtonian dynamics, proposed in 1982 by Edward Fredkin and Tommaso Toffoli. Instead of using electronic signals like a conventional computer, it relies on the motion of spherical billiard balls in a friction-free environment made of buffers against which the balls bounce perfectly. It was devised to investigate the relation between computation and reversible processes in physics.

The idea of human artifacts being given life has fascinated humankind for at least 3000 years. As seen in tales ranging from Pygmalion to Frankenstein, humanity has long been intrigued by the concept of artificial life. 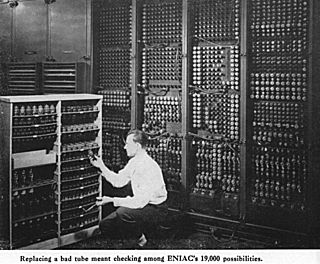 A computer is a machine that can be programmed to carry out sequences of arithmetic or logical operations automatically. Modern computers can perform generic sets of operations known as programs. These programs enable computers to perform a wide range of tasks. A computer system is a "complete" computer that includes the hardware, operating system, and peripheral equipment needed and used for "full" operation. This term may also refer to a group of computers that are linked and function together, such as a computer network or computer cluster. 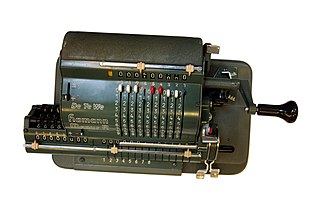 A mechanical computer is built from mechanical components such as levers and gears, rather than electronic components. The most common examples are adding machines and mechanical counters, which use the turning of gears to increment output displays. More complex examples could carry out multiplication and division—Friden used a moving head which paused at each column—and even differential analysis. One model sold in the 1960s calculated square roots.

Lateral computing is a lateral thinking approach to solving computing problems. Lateral thinking has been made popular by Edward de Bono. This thinking technique is applied to generate creative ideas and solve problems. Similarly, by applying lateral-computing techniques to a problem, it can become much easier to arrive at a computationally inexpensive, easy to implement, efficient, innovative or unconventional solution.