The Security Council remained concerned by the threat that piracy and armed robbery against vessels posed to the situation in Somalia, nearby states and international shipping. The United Nations Convention on the Law of the Sea was also reaffirmed as was the need to address problems caused by the limited capacity of the judicial system in Somalia and neighbouring states to effectively prosecute those suspected of being involved in piracy. In this regard, the United Nations Office on Drugs and Crime, Contact Group on Piracy off the Coast of Somalia (CGPCS) and other international organisations were assisting in enhancing the judicial systems in Somalia, Kenya, the Seychelles and other countries in the region to convict pirates.

The resolution welcomed efforts by the European Union, NATO and other states acting in a national capacity for their efforts to suppress acts of piracy in co-operation with the Transitional Federal Government off the coast of Somalia. The efforts of Kenya, the Seychelles and other states were praised following the prosecution of pirates in their countries, consistent with international humanitarian law. There was concern that some suspected pirates had been released without facing justice, due to uncertainty over who could prosecute them. [2]

In the second part of the resolution, sponsored by Russia, [3] the Council reiterated that the failure to prosecute those responsible for acts of piracy undermined anti-piracy efforts by the international community. Countries were called upon to criminalise piracy within their national laws and to detain and prosecute suspected pirates off the coast of Somalia in accordance with international human rights law. Progress made towards the implementation of the International Maritime Organization Djibouti Code of Conduct was praised, with the Council further calling upon participants to implement it fully as soon as possible. Finally, the Secretary-General Ban Ki-moon was requested within three months to report on options for prosecuting and imprisoning those responsible for piracy and armed robbery, including the possibility of establishing a regional or international tribunal. [4] 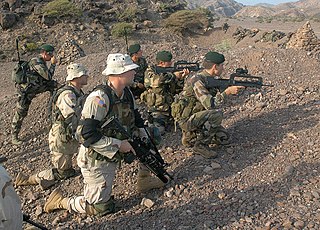 Combined Task Force 150 (CTF-150) is a multinational coalition naval task force working under the 33-nation coalition of Combined Maritime Forces and is based in Bahrain established to monitor, board, inspect, and stop suspect shipping to pursue the "Global War on Terrorism" and in the Horn of Africa region (HOA) includes operations in the North Arabia Sea to support operations in the Indian Ocean. These activities are referred to as Maritime Security Operations (MSO).

Piracy in the Gulf of Guinea affects a number of countries in West Africa as well as the wider international community. By 2011, it had become an issue of global concern. Pirates in the Gulf of Guinea are often part of heavily armed criminal enterprises, who employ violent methods to steal oil cargo. In 2012, the International Maritime Bureau, Oceans Beyond Piracy and the Maritime Piracy Humanitarian Response Program reported that the number of vessels attacks by West African pirates had reached a world high, with 966 seafarers attacked during the year. According to the Control Risks Group, pirate attacks in the Gulf of Guinea had by mid-November 2013 maintained a steady level of around 100 attempted hijackings in the year, a close second behind Southeast Asia. Piracy in the Gulf of Guinea continues to be a concern to the shipping industry, which is affected significantly. At the same time, governments in the region generally highlight that the fight against piracy requires a broad understanding of maritime security throughout the Gulf of Guinea.

Piracy off the coast of Somalia occurs in the Gulf of Aden, Guardafui Channel and Somali Sea, in Somali territorial waters and other areas. It was initially a threat to international fishing vessels, expanding to international shipping since the second phase of the Somali Civil War, around 2000. 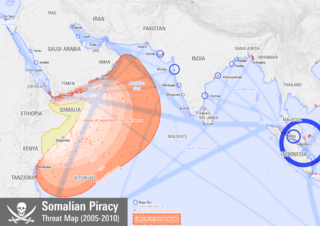 Operation Atalanta, formally European Union Naval ForceSomalia, is a current counter-piracy military operation at sea off the Horn of Africa and in the Western Indian Ocean, that is the first naval operation conducted by the European Union (EU). The operational headquarters is currently located at the Spanish Operation Headquarters (ESOHQ) at Naval Station Rota in Spain, having moved from London as a result of the British withdrawal from the EU.

United Nations Security Council Resolution 1976, adopted unanimously on April 11, 2011, after recalling previous resolutions on the situation in Somalia, particularly resolutions 1918 (2010) and 1950 (2010), the Council decided to consider the establishment of special Somali courts to try pirates operating off the coast of the country. 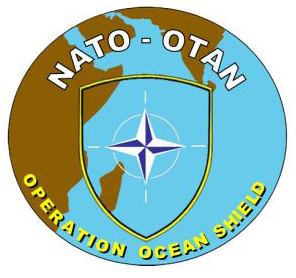 Operation Ocean Shield was NATO's contribution to Operation Enduring Freedom – Horn of Africa (OEF-HOA), an anti-piracy initiative in the Indian Ocean, Guardafui Channel, Gulf of Aden and Arabian Sea. It follows the earlier Operation Allied Protector. Naval operations began on 17 August 2009 after being approved by the North Atlantic Council, the program was terminated on 15 December 2016 by NATO. Operation Ocean Shield focused on protecting the ships of Operation Allied Provider, which transported relief supplies as part of the World Food Programme's mission in the region. The initiative also helped strengthen the navies and coast guards of regional states to assist in countering pirate attacks. Additionally, China and South Korea sent warships to participate in these activities.

The Contact Group on Piracy off the Coast of Somalia, commonly abbreviated as CGPCS, is an international governance mechanism established in New York on January 14, 2009 to facilitate the discussion and coordination of actions among states and organizations to suppress Somali piracy.

In keeping with the Paris Principles definition of a child soldier, the Roméo Dallaire Child Soldiers Initiative defines a child pirate' as any person below 18 years of age who is or who has been recruited or used by a pirate gang in any capacity, including children - boys and/or girls - used as gunmen in boarding parties, hostage guards, negotiators, ship captains, messengers, spies or for sexual purposes, whether at sea or on land. It does not only refer to a child who is taking or has taken a direct part in kinetic criminal operations.

Piracy in Somalia has been a threat to international shipping since the beginning of the country's civil war in the early 1990s. Since 2005, many international organizations have expressed concern over the rise in acts of piracy. Piracy impeded the delivery of shipments and increased shipping expenses, costing an estimated $6.6 to $6.9 billion a year in global trade in 2011 according to Oceans Beyond Piracy (OBP). According to the German Institute for Economic Research (DIW), a veritable industry of profiteers also arose around the piracy. Insurance companies significantly increased their profits from the pirate attacks, as the firms hiked rate premiums in response. Since 2013, piracy attacks have reduced in the region due mostly to patrolling by the navies of countries across the world, especially India, China and EU Navfor Operation Atalanta.

International piracy law is international law that is meant to protect against piracy. It was enacted primarily by the United Nations and UNCLOS, and defines different types of piracy and ways to combat it.