Last updated November 29, 2022
One of the four cardinal directions
For other uses, see West (disambiguation).

West or Occident is one of the four cardinal directions or points of the compass. It is the opposite direction from east and is the direction in which the Sun sets on the Earth.

The word "west" is a Germanic word passed into some Romance languages (ouest in French, oest in Catalan, ovest in Italian, oeste in Spanish and Portuguese). As in other languages, the word formation stems from the fact that west is the direction of the setting sun in the evening: 'west' derives from the Indo-European root *wes reduced from *wes-pero 'evening, night', cognate with Ancient Greek ἕσπερος hesperos 'evening; evening star; western' and Latin vesper 'evening; west'. [1] Examples of the same formation in other languages include Latin occidens 'west' from occidō 'to go down, to set' and Hebrew מַעֲרָב maarav 'west' from עֶרֶב erev 'evening'.

To go west using a compass for navigation (in a place where magnetic north is the same direction as true north) one needs to set a bearing or azimuth of 270°.

West is the direction opposite that of the Earth's rotation on its axis, and is therefore the general direction towards which the Sun appears to constantly progress and eventually set. This is not true on the planet Venus, which rotates in the opposite direction from the Earth (retrograde rotation). To an observer on the surface of Venus, the Sun would rise in the west and set in the east [2] although Venus's opaque clouds prevent observing the Sun from the planet's surface. [3]

In a map with north at the top, west is on the left.

Moving continuously west is following a circle of latitude.

Due to the direction of the Earth's rotation, the prevailing wind in many places in the middle latitudes (i.e. between 35 and 65 degrees latitude) is from the west, known as the westerlies. [4] [5]

The phrase "the West" is often spoken in reference to the Western world, which includes the European Union (also the EFTA countries), the Americas, Israel, Australia, New Zealand and (in part) South Africa.

The concept of the Western part of the earth has its roots in the Western Roman Empire and the Western Christianity. During the Cold War "the West" was often used to refer to the NATO camp as opposed to the Warsaw Pact and non-aligned nations. The expression survives, with an increasingly ambiguous meaning.

In Chinese Buddhism, the West represents movement toward the Buddha or enlightenment (see Journey to the West). The ancient Aztecs believed that the West was the realm of the great goddess of water, mist, and maize. In Ancient Egypt, the West was considered to be the portal to the netherworld, and is the cardinal direction regarded in connection with death, though not always with a negative connotation. Ancient Egyptians also believed that the Goddess Amunet was a personification of the West. [6] The Celts believed that beyond the western sea off the edges of all maps lay the Otherworld, or Afterlife.

In Judaism, west is seen to be toward the Shekinah (presence) of God, as in Jewish history the Tabernacle and subsequent Jerusalem Temple faced east, with God's Presence in the Holy of Holies up the steps to the west. According to the Bible, the Israelites crossed the Jordan River westward into the Promised Land. In Islam, while in India, people pray facing towards the west as in respect to Mecca, Mecca is in the West-ward direction.

In American literature (e.g., in The Great Gatsby ) moving West has sometimes symbolized gaining freedom, perhaps as an association with the settling of the Wild West (see also the American frontier and Manifest Destiny).

Tolkien used it symbolically, with the dying Thorin calling Bilbo Baggins "child of the kindly West" in The Hobbit . This is much more definite in The Lord of the Rings , where the east served Sauron and his enemies associate themselves with the West.

In Saberhagen's Empire of the East series, the rival powers are West and East, including both humans and supernatural beings. All demons are part of the East.

This is not universal. In Tolkien's earlier work, the north had been the direction of evil. C S Lewis in The Voyage of the Dawn Treader has the east as the sacred direction, leading to Aslan's country

A solar equinox is a moment in time when the Sun crosses the Earth's equator, which is to say, appears directly above the equator, rather than north or south of the equator. On the day of the equinox, the Sun appears to rise "due east" and set "due west". This occurs twice each year, around 20 March and 23 September.

Venus is the second planet from the Sun. It is sometimes called Earth's "sister" or "twin" planet as it is almost as large and has a similar composition. As an interior planet to Earth, Venus appears in Earth's sky never far from the Sun, either as morning star or evening star. Aside from the Sun and Moon, Venus is the brightest natural object in Earth's sky, capable of casting visible shadows on Earth at dark conditions and being visible to the naked eye in broad daylight. 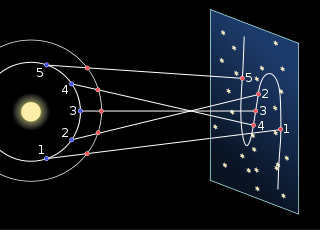 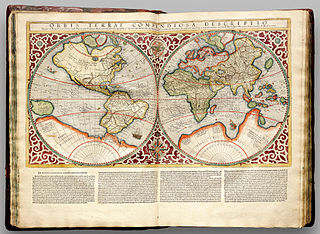 A prime meridian is an arbitrary meridian in a geographic coordinate system at which longitude is defined to be 0°. Together, a prime meridian and its anti-meridian form a great circle. This great circle divides a spheroid, like the Earth, into two hemispheres: the Eastern Hemisphere and the Western Hemisphere. For Earth's prime meridian, various conventions have been used or advocated in different regions throughout history. The Earth's current international standard prime meridian is the IERS Reference Meridian. It is derived, but differs slightly, from the Greenwich Meridian, the previous standard. 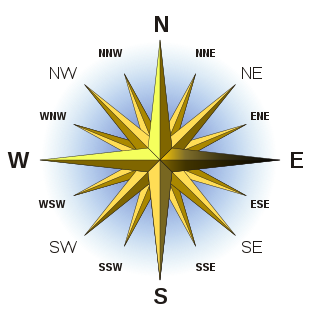 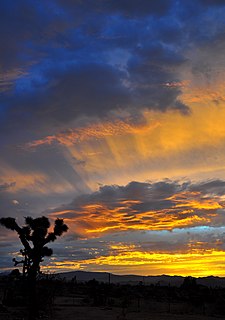 Sunset, also known as sundown, is the daily disappearance of the Sun below the horizon due to Earth's rotation. As viewed from everywhere on Earth, the equinox Sun sets due west at the moment of both the spring and autumn equinoxes. As viewed from the Northern Hemisphere, the Sun sets to the northwest in the spring and summer, and to the southwest in the autumn and winter; these seasons are reversed for the Southern Hemisphere.

Night is the period of ambient darkness from sunset to sunrise during each 24-hour day, when the Sun is below the horizon. The exact time when night begins and ends depends on the location and varies throughout the year, based on factors such as season and latitude. 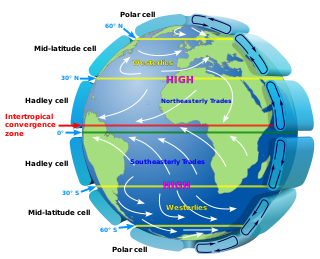 Atmospheric circulation is the large-scale movement of air and together with ocean circulation is the means by which thermal energy is redistributed on the surface of the Earth. The Earth's atmospheric circulation varies from year to year, but the large-scale structure of its circulation remains fairly constant. The smaller scale weather systems – mid-latitude depressions, or tropical convective cells – occur chaotically, and long-range weather predictions of those cannot be made beyond ten days in practice, or a month in theory. 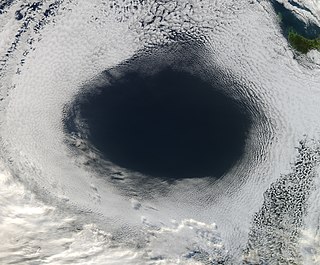 A high-pressure area, high, or anticyclone, is an area near the surface of a planet where the atmospheric pressure is greater than the pressure in the surrounding regions. Highs are middle-scale meteorological features that result from interplays between the relatively larger-scale dynamics of an entire planet's atmospheric circulation. 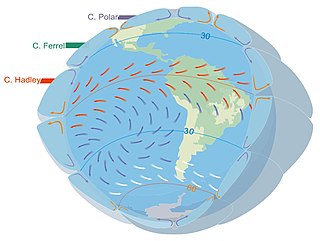 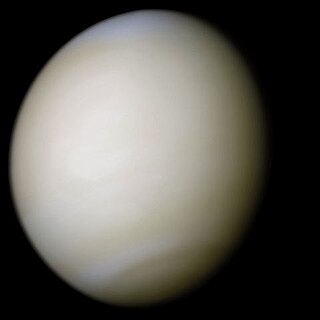 The following outline is provided as an overview of and topical guide to Venus: 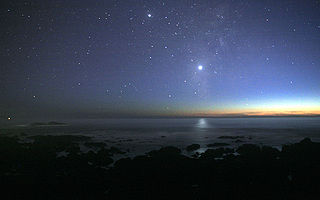 Venus, as one of the brightest objects in the sky, has been known since prehistoric times and has been a major fixture in human culture for as long as records have existed. As such, it has a prominent position in human culture, religion, and myth. It has been made sacred to gods of many cultures, and has been a prime inspiration for writers and poets as the morning star and evening star. 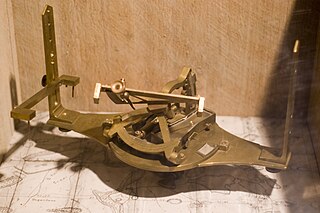 Burt's solar compass or astronomical compass is a surveying instrument that makes use of the Sun's direction instead of magnetism. William Austin Burt invented his solar compass in 1835. The solar compass works on the principle that the direction to the Sun at a specified time can be calculated if the position of the observer on the surface of the Earth is known, to a similar precision. The direction can be described in terms of the angle of the Sun relative to the axis of rotation of the planet.

Direction determination refers to the ways in which a cardinal direction or compass point can be determined in navigation and wayfinding. The most direct method is using a compass, but indirect methods exist, based on the Sun path, the stars, and satellite navigation.