Route 90 is a major north-south arterial route in Winnipeg, Manitoba, Canada. It begins at the South Perimeter Highway (PTH 100) and ends at the city's northwest limit, where it continues north as PTH 7. Route 90 is designated as the city's airport route, as it passes by Winnipeg James Armstrong Richardson International Airport. [2]

Route 90 follows Kenaston Boulevard between the south Perimeter Highway and the Assiniboine River, through the suburbs of Waverley West, Fort Garry and Tuxedo. North of the river, Route 90 enters St. James and follows Century Street to St. Matthews Avenue. Between St. Matthews and Dublin Avenues, it splits into separate one-way streets, with Century as the northbound and King Edward Street as the southbound. The route follows King Edward Street to the CP Carberry line underpass, after which Route 90 follows Oak Point Highway and later Brookside Boulevard before leaving the city and becoming PTH 7 approximately one kilometre south of the North Perimeter Highway (PTH 101). [3]

Kenaston Boulevard is named after E. C. Kenaston, who was responsible for the development of Tuxedo, one of the main suburbs the street passes through. Until the 1980s, it was a minor road that extended south to Scurfield Boulevard and was primarily used to access the inland cement plant and quarries located near present-day Fort Whyte. In order to accommodate increased traffic and development in the area, Kenaston Boulevard was extended to Bishop Grandin Boulevard in the early 2000s and later all the way south to the Perimeter Highway in 2015. [4] Proposals currently exist to appropriate land former belonging the Canadian Armed Forces' Kapyong Barracks to widen the road between the rail crossing and the St. James Bridge. [5] A separate proposal would see the route extended south of the Perimeter Highway to Highway 75, providing a western bypass of St. Norbert. [6]

Oak Point Highway in Winnipeg is an unattached remnant of an old road leading to Oak Point, Manitoba, which is now part of PTH 6. [7]

From south to north; all intersections are at-grade unless otherwise indicated:

Provincial Trunk Highways (PTH) 100 and 101, also known as the Perimeter Highway, form a beltway around the Canadian city of Winnipeg, Manitoba. The Perimeter Highway is approximately 90 km (56 mi) in length and serves as an alternate route around Winnipeg for through traffic, as there are no freeways in the city.

Provincial Trunk Highway 1 is Manitoba's section of the Trans-Canada Highway. It is a heavily used, 4-lane divided highway, with the exception of a short 18 km section in the southeastern corner of the province. It is the main link between southern Manitoba's largest cities, and also serves as the province's main transportation link to the neighbouring provinces of Saskatchewan and Ontario. The highway is the only major east-west divided highway in Manitoba, and carries a large majority of east-west traffic within and through the province. It has full freeway status sections at Portage la Prairie and Winnipeg. The total distance of the Trans-Canada Highway in Manitoba is approximately 490 km (300 mi).

Provincial Trunk Highway 59 is a major provincial highway in the Canadian province of Manitoba. It runs from the Lancaster-Tolstoi Border Crossing, through the city of Winnipeg, north to 8th Avenue in Victoria Beach on Lake Winnipeg.

Provincial Trunk Highway 75 is a major highway in the province of Manitoba, Canada. It is the main link between the city of Winnipeg and the Canada–United States border, where it connects with Interstate 29 (I-29)/U.S. Route 81.

Provincial Trunk Highway 4 is a provincial highway in the Canadian province of Manitoba. The highway connects the city of Selkirk to PTH 59, the main route to Grand Beach and cottage country on the east side of Lake Winnipeg.

Provincial Trunk Highway 9 is a provincial primary highway located in the Canadian province of Manitoba. It runs from Winnipeg north to Gimli.

Provincial Trunk Highway 2 is a 315-kilometre (196-mile) highway in the Canadian province of Manitoba. It runs from Highway 13 at the Manitoba-Saskatchewan border to Winnipeg's Perimeter Highway near Oak Bluff. Before the implementation of the Winnipeg's city route system, PTH 2 shared McGillivray Boulevard with PTH 3 to Pembina Highway. PTH 2 is the Manitoba portion of the Red Coat Trail.

Route 20 is a major north-south arterial route in the city of Winnipeg, Manitoba, Canada. It is also part of Manitoba Highway 59, the only Provincial Trunk Highway that crosses through the city.

Route 165 is a highway in Winnipeg, Manitoba. Currently the route is an at-grade expressway running from an interchange with Kenaston Boulevard (Route 90) to Lagimodiere Boulevard. The route runs through the districts of Fort Garry, St. Vital, and St. Boniface. 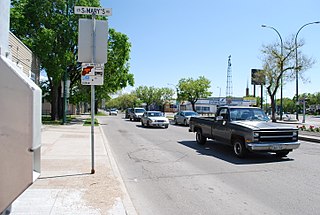 Route 145 is an arterial road in Winnipeg, Manitoba, Canada. It follows Wilkes Avenue and the Sterling Lyon Parkway, running east from an interchange at the Perimeter Highway to Waverley Street. Heading west from Winnipeg, it continues as Provincial Road 427 into the Rural Municipality of Headingley. Wilkes Avenue runs parallel to the main Canadian National Railway line.

Route 25 is a city route in the Canadian city of Winnipeg, Manitoba. It follows Inkster Boulevard from Route 90 to Route 180. West of Route 90, Inkster Boulevard becomes PTH 190 as it leaves Winnipeg and enters the Rural Municipality of Rosser. East of McPhillips, Inkster continues to Route 52, but this is not part of Route 25.

Route 155 is a city route in Winnipeg, Manitoba. It runs from the Perimeter Highway to Route 42.

Route 80, locally known as Waverley Street, is a city route in the southwest portion of Winnipeg, Manitoba, Canada. It runs from Kenaston Boulevard to Grant Avenue.

Route 115 is a major east-west arterial route in the Winnipeg suburbs of St. Boniface and Transcona. It is the western extension of Manitoba Highway 15, which runs eastward to the communities of Dugald and Elma, Manitoba. Within the city boundaries it connects the largely industrial areas of south Transcona and east St. Boniface with Old St. Boniface and downtown.

Provincial Trunk Highway 26 is a provincial highway in the Canadian province of Manitoba. It is an east-west route that begins and ends at the Trans-Canada Highway. The western terminus is located near the interchange of PTH 1 and PTH 1A approximately 3 kilometres east of Portage la Prairie, while the eastern terminus is 3 kilometres southeast of St. François Xavier and 13 kilometres west of Winnipeg's Perimeter Highway. PTH 26 provides access to the small communities of St. François Xavier and Poplar Point. It serves as an alternative scenic route between Portage la Prairie and Winnipeg as it closely follows the Assiniboine River which flows south of the highway. The speed limit on this highway is 90 kilometres-per-hour.

Provincial Trunk Highway 190, also known as CentrePort Canada Way, is a provincial highway in the Canadian province of Manitoba. It connects the Perimeter Highway with Winnipeg Route 25 in the City of Winnipeg; part of the highway passes through the neighboring Rural Municipality of Rosser. The highway includes a traffic interchange at the junction with the Perimeter Highway, as well as a grade separation over the CP Rail main line. The highway is intended to service the industrial lands west of James Armstrong Richardson Winnipeg International Airport, which will be a part of the CentrePort Canada cargo hub. It is numbered for its ultimate role in connecting Highway 1 with Winnipeg Route 90.

Template:Attached KML/Winnipeg Route 90
KML is from Wikidata
This page is based on this Wikipedia article
Text is available under the CC BY-SA 4.0 license; additional terms may apply.
Images, videos and audio are available under their respective licenses.