1941: Counter Attack is a vertical scrolling shooter arcade game by Capcom, released in February 1990. It is the second sequel to 1942 , and the third game in the 19XX series. It was ported to the SuperGrafx in 1991 and to GameTap. It was released on Capcom Classics Collection Remixed for the PlayStation Portable and Capcom Classics Collection Vol. 2 for PlayStation 2 and Xbox. It was followed by 19XX: The War Against Destiny in 1996.

The goal is to shoot down enemy airplanes and collect weapon power-ups (POW). [2] The game uses a vitality system instead of life system in which if the player is hit, it loses one point of vitality and the player is destroyed if hit with 0 vitality then the player is given the option to continue. Lightning attacks can be used by pressing the B button which sacrifices a portion of life energy. Three loops can be performed per level and a bonus is awarded at the end of the level for unused loops. Player 1 uses a P-38 Lightning and Player 2 uses a new plane: DH.98 Mosquito. The game shifts from the original Pacific Front setting with that of the Western Front, in the north Atlantic Ocean.

In Japan, Game Machine listed 1941: Counter Attack in its March 15, 1990 issue as the third most popular arcade game of the month. [16] The game garnered positive reception from reviewers and awards from Gamest magazine. [15] [17] However, the original arcade version had mixed reception from western publications. [3] [18] In contrast, the SuperGrafx conversion had very positive reception from Japanese and western critics. [19] [20] Readers of PC Engine Fan voted to give the SuperGrafx version a 19.44 out of 30 score, ranking at the number 368 spot in a poll. [21]

R-Type is a horizontally scrolling shooter arcade video game developed and released by Irem in 1987. The player controls a star ship, the R-9 "Arrowhead", in its efforts to destroy the Bydo, a powerful alien race bent on wiping out all of mankind. The R-9 can acquire a glowing orbicular device called a "Force", protecting it from enemy fire and providing additional firepower. The arcade version was distributed by Nintendo in North America; it is the last arcade title Nintendo distributed. It is the first game in the R-Type series.

The TurboGrafx-16, known as the PC Engine in Japan, is a fourth-generation home video game console designed by Hudson Soft and sold by NEC Home Electronics. It was the first console marketed in the 16-bit era, although it used a modified 8-bit CPU. It was released in Japan in 1987 and in North America in 1989. The Japanese model was officially imported and distributed in France in 1989, with unofficial models making their way to the UK; and in 1990 some other European countries received a PAL version based on the American model known simply as the TurboGrafx. In Japan, the system was launched as a competitor to the Famicom, but the delayed United States release meant that it ended up competing with the Sega Genesis and later the Super NES. 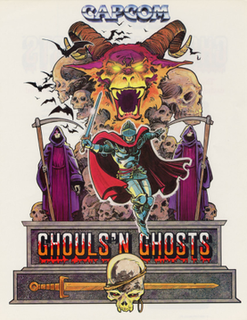 Ghouls 'n Ghosts, known as Daimakaimura in Japan, is a side-scrolling platform game developed by Capcom, released as an arcade game in 1988 and subsequently ported to a number of home platforms. It is the sequel to Ghosts 'n Goblins and the second game in the Ghosts 'n Goblins series.

Final Fight is a side-scrolling beat-'em-up video game produced by Capcom. Originally released as an arcade game in 1989, it was the seventh title released for the CP System hardware. Set in the fictional Metro City, the game lets the player control one of three street fighters: former pro wrestler and city mayor Mike Haggar, expert brawler Cody Travers, and modern-day ninja Guy. The trio set out to rescue Jessica when she is kidnapped by the Mad Gear Gang. 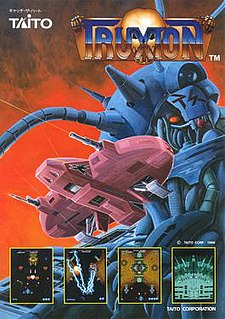 Truxton is a 1988 vertically scrolling shooter arcade video game originally developed by Toaplan and published in Japan and Europe by Taito, as well in North America by Midway and Romstar. Set in a future where the Gidans alien race led by Dogurava invaded the fictional planet Borogo, players assume the role of fighter pilot Tatsuo taking control of the Super Fighter ship on a last-ditch effort to overthrow the alien invaders. 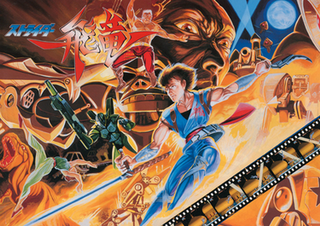 Strider, released in Japan as Strider Hiryū, is a hack-and-slash platform game released in arcades in 1989 by Capcom. Strider is set in a dystopian future with a wide range of settings that affect gameplay. The game resulted from cooperation between Capcom and manga publisher Moto Kikaku. It marked the video game debut of Strider Hiryu, after the character was introduced in the 1988 manga Strider Hiryu.

19XX: The War Against Destiny is a vertical scrolling shooter arcade game released by Capcom in 1995. The story takes place before a fictional 20th century war as a lone pilot tries to defeat an entire army and evil organization from starting another World War, which soon escalates to a nuclear apocalypse.

Chōzetsurin Jin: Bravoman is a 1988 beat'em up arcade game developed and published in Japan by Namco. Described as a "comical action game", the player controls the titular character, a bionic superhero with telescopic limbs, as he must defeat the villainous Dr. Bomb before he takes over the world. Bravoman can use his arms, legs and head to defeat enemies, and can also crouch and jump over them. The game ran on the Namco System 1 arcade board.

Street Fighter is a 1987 arcade game developed by Capcom. It is the first competitive fighting game produced by the company and the first installment in the Street Fighter series. It was a commercial success in arcades and introduced some of the conventions made standard in later fighting games, such as the six button controls and the use of command-based special moves. 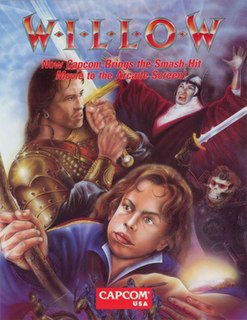 Willow is a 1989 arcade game by Capcom. Capcom published two different games in 1989 based on the 1988 film of the same name. The arcade version is a platform game while the Nintendo Entertainment System version is an action-RPG. 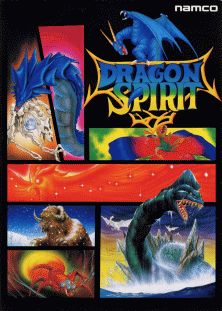 Dragon Spirit is a 1987 vertical-scrolling shooter arcade game developed and published by Namco. In North America, it was distributed by Atari Games. Controlling the dragon Amul, the player must complete each of the game's nine areas to rescue the princess Alicia from the demon Zawell. Similar to Namco's own Xevious, Amul has a projectile weapon for destroying air-based enemies and a bomb for destroying ground enemies. It ran on the Namco System 1 arcade board.

Genpei Tōma Den is a side-scrolling hack and slash produced by Namco that was released as a coin-operated video game in 1986 in Japan. It runs on Namco System 86 hardware. Over a decade later, the game was released in America and Europe in the video game compilation Namco Museum Vol. 4 under the title of The Genji and the Heike Clans. 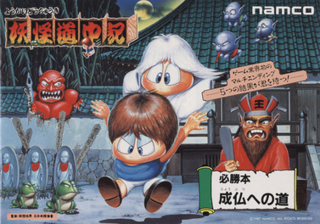 Yokai Dochuki is a 1987 platform arcade game developed and released by Namco in Japan. The player controls a young boy named Tarosuke as he must make his way through Jigoku, the Japanese concept of Hell, to reach Buddha, who will determine his fate. Tarosuke can fire small "ki" bullets at enemies to defeat them; he can also charge them to increase their power. Enemies will drop money when defeated, which can be used to purchase weapons and other items in stores. 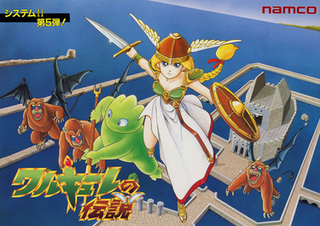 Valkyrie no Densetsu is a 1989 action-adventure role-playing arcade game developed and published in Japan by Namco. It is a follow-up to the Family Computer game Valkyrie no Bōken (1986). Players control the warrior maiden Valkyrie and her lizard-like companion Kurino Xandra as they set out to drop a mythical item called the Golden Seed into the Northern Fountain to replenish the dying crop fields of Xandra Land. Gameplay involves defeating enemies and collecting gold to purchase magical spells and weapons in shops.

Dynasty Wars is a side-scrolling beat-'em-up arcade game released in 1989 by Capcom, based on a Japanese manga Tenchi wo Kurau and a reenactment of the battle between the Kingdom of Shu and the Yellow Turban rebels. Each of the two players can assume the roles of one of the four Chinese generals riding on horseback from the Three Kingdoms period in an attempt to smash the rebellion. 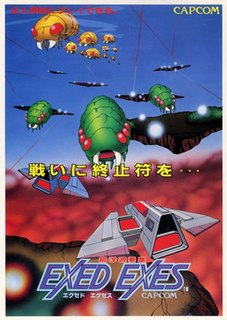 Exed Exes is a vertically scrolling shooter that was released in arcades in 1985 by Capcom. 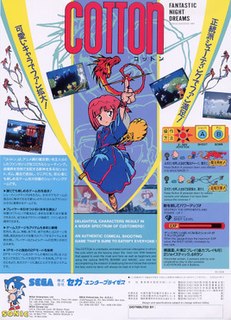 Cotton: Fantastic Night Dreams is a scrolling shooter video game developed by Success and originally released in Japanese arcades in 1991. The first installment in the Cotton series, players assume the role of the young witch Cotton who, alongside her fairy companion Silk, sets out on her broomstick on a quest to defeat several monsters and get her Willow candy. Its gameplay mainly consists of shooting mixed with role-playing game elements using a main two-button configuration.

Capcom Arcade Stadium is an arcade video game compilation by Capcom. It contains 32 arcade games originally published by Capcom between 1984 and 2001. The compilation was initially released on Nintendo Switch in February 2021, then on Microsoft Windows, PlayStation 4, and Xbox One later in May.