At 10:40 A.M., a United States Air Force F-100D Super Sabre, piloted by 34-years-old Captain John G. Schmitt, Jr. from Chalmers, Indiana, became uncontrollable during a training or test flight from Kadena Air Base located in the towns of Kadena and Chatan. Schmitt ejected from the aircraft, landing safely and unhurt. However, the F-100 crashed into Miyamori Elementary School and surrounding houses in the nearby city of Ishikawa, killing 11 students and 6 other people in the neighborhood, and injuring 210 others including 156 students at the school.

Immediately after the crash, troops of the armed police rushed to the accident site and worked on rescue operations. Most of the doctors residing in central Okinawa Island rushed to treat the victims. The fire caused by the accident was extinguished one hour later, with 27 buildings including 3 school buildings and 1 public building being destroyed, while 2 school buildings, 2 private houses and eight other buildings were half-destroyed. At the time of the accident, Miyamori Elementary School had about 1,000 children and teachers, with almost all children in the school taking a milk break at the end of the second hour of classes.

The F-100 crash became a major tragedy in Okinawa as the victims were mostly very young schoolchildren, and contributed to increasingly ill-feelings towards the United States Civil Administration of the Ryukyu Islands from the Okinawan community. The crash led to fierce protests of anti-American sentiment in Okinawa, calling for the US occupation authorities to leave and for the islands to be returned to the control of the Government of Japan. The US military immediately launched a compensation scheme for victims, paying $4,500 for the dead and $2,300-$5,900 for serious injuries depending on disability. The US military paid a total of $119,066 in compensation for the accident, but this amount was only about 10% of the victims requested. The US authorities determined that the defective F-100 had experienced an engine fire despite recently undergoing repairs in Taiwan, and that Schmitt had attempted to aim the aircraft at an unpopulated hilly area before ejecting.

In 1965, a memorial statue for the victims of the disaster was erected at the crash site in Ishikawa.

In 1976, a former student at Miyamori Elementary School died at the age of 23 from complications related to burns caused by the crash 17 years earlier. Their death brought the sum of people killed in the F-100 crash to 18, and their name was added to the monument in 2010.

On June 30, 2009, 800 people, including former students of Miyamori Elementary and relatives of the victims, attended a 50th-anniversary memorial service at the crash site, now in the city of Uruma. Okinawa Governor Hirokazu Nakaima spoke at the ceremony, saying, "The Okinawa people of the time were deeply saddened by the accident in which the lives of children having dreams and hopes for the future were lost." [1]

The F-100 crash and its aftermath were dramatized in the movie Himawari, directed by Yoshihiro Oikawa, completed in 2012. [2] [3]

The United States Forces Japan (USFJ) is an active subordinate unified command of the United States Indo-Pacific Command (USINDOPACOM). It was activated at Fuchū Air Station in Tokyo, Japan, on 1 July 1957 to replace the Far East Command (FEC). USFJ is commanded by the Commander, U.S. Forces, Japan (COMUSJAPAN) who is also dual-hatted as commander of the Fifth Air Force. At present, USFJ is headquartered at Yokota Air Base in Tokyo. 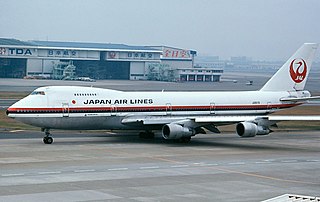 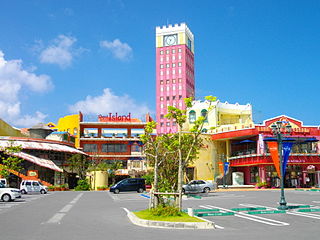 Chatan is a town located in Nakagami District, Okinawa Prefecture, Japan. As of October 2016 the town had an estimated population of 28,578 and the density of 2,100 per km². The total area of Chatan is 13.62 square kilometres (5.26 sq mi). 53.5% of the land area of the town is covered by United States military bases. 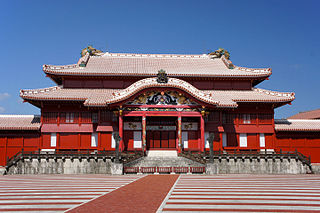 This article is about the history of the Ryukyu Islands southwest of the main islands of Japan. 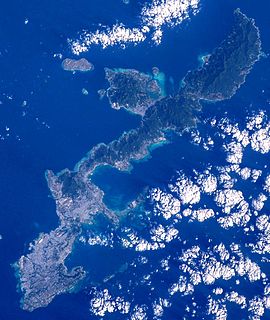 Okinawa Island is the largest of the Okinawa Islands and the Ryukyu (Nansei) Islands of Japan in the Kyushu region. It is the smallest and least populated of the five main islands of Japan. The island is approximately 106 kilometres (66 mi) long and an average 11 kilometres (7 mi) wide, and has an area of 1,206.98 square kilometers (466.02 sq mi). It is roughly 640 kilometres (400 mi) south of the main island of Kyushu and the rest of Japan. It is 500 km (300 mi) north of Taiwan. The total population of Okinawa Island is 1,384,762. The Greater Naha area has roughly 800,000 residents while the city itself has about 320,000 people. Naha is home to the prefectural seat of Okinawa Prefecture on the southwestern part of Okinawa Island. It has a humid subtropical climate. Okinawa is part of the Kyushu region. 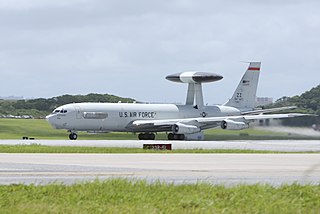 Kadena Air Base is a United States Air Force base in the towns of Kadena and Chatan and the city of Okinawa, in Okinawa Prefecture, Japan. It is often referred to as the "Keystone of the Pacific". Kadena Air Base is home to the USAF's 18th Wing, the 353d Special Operations Group, reconnaissance units, 1st Battalion, 1st Air Defense Artillery, and a variety of associated units. Over 20,000 American servicemembers, family members, and Japanese employees live or work aboard Kadena Air Base. It is the largest and most active US Air Force base in the Far East. 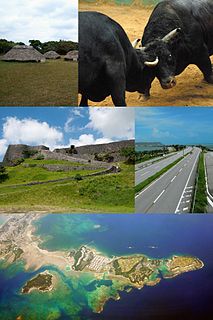 Uruma is a city located in Okinawa Prefecture, Japan. The modern city of Uruma was established on April 1, 2005, when the cities of Gushikawa and Ishikawa were merged with the towns of Katsuren and Yonashiro. As of May 1, 2013, the city has an estimated population of 118,330 and a population density of 1,400 persons per km². The total area is 86.00 km². The city covers part of the east coast of the south of Okinawa Island, the Katsuren Peninsula, and the eight Yokatsu Islands. The Yokatsu Islands include numerous sites important to the Ryukyuan religion, and the city as a whole has numerous historical sites, including: Katsuren Castle, Agena Castle, and Iha Castle and the Iha Shell Mound. It is home to the largest venue for Okinawan bullfighting. The Mid-Sea Road, which crosses the ocean and connects the Yokatsu Islands to the main island of Okinawa, is now a symbol of Uruma. 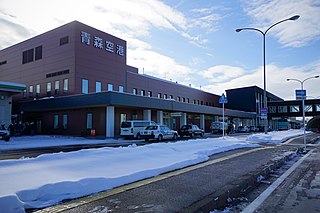 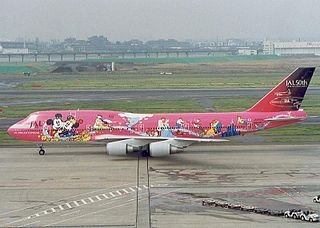 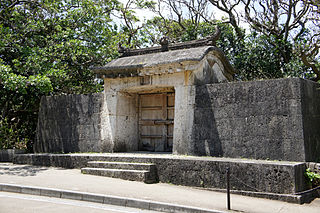 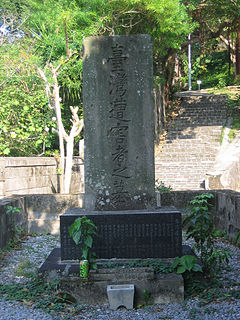 The Mudan incident of 1871 was the massacre of 54 Ryūkyūan sailors in Qing-era Taiwan who wandered into the central part of Taiwan after their ship was shipwrecked. 12 men were rescued by Han Chinese and were transferred to Miyako Island in the Ryukyus. Japan sent a military force to Taiwan in the Taiwan Expedition of 1874, killing 16 aborigines while the aborigines killed 6 of their own soldiers, in retaliation for what Japan viewed as the murder of their citizens by rebellious aboriginal peoples out of their control but in the dominion of the failing Qing dynasty.

The 1977 Yokohama F-4 crash occurred on 27 September 1977, in Yokohama, Japan. In the crash, a United States Marine Corps RF-4B-41-MC, BuNo 157344, c/n 3717, 'RF611', of VMFP-3, a flown by a United States Marine Corps crew based at nearby Naval Air Facility Atsugi, en route to USS Midway in Sagami Bay, suffered a mechanical malfunction, the port engine caught fire, and crashed into a residential neighborhood. The crash killed two boys, ages 1 and 3, and injured seven others, several seriously. The two-man crew of the aircraft, Capt. J. E. Miller, of Mendota, Illinois, and 1st Lt. D. R. Durbin, of Natchitoches, Louisiana, ejected and were not seriously injured.

The 1964 Machida F-8 crash occurred on 5 April 1964 in Machida, Tokyo, Japan. A United States Marine Corps Vought RF-8A Crusader, BuNo 146891, which was returning as one half of a two-plane flight of Crusaders from Kadena Air Base, Okinawa to its home base of Naval Air Facility Atsugi, Kanagawa Prefecture, suffered a mechanical malfunction. It subsequently crashed into a residential neighborhood in the Hara-Machida area of Machida City in Tokyo, Japan. The other aircraft landed safely at Atsugi. 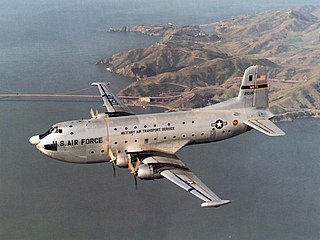 The Tachikawa air disaster occurred on the afternoon of Thursday, June 18, 1953 when a United States Air Force (USAF) Douglas C-124 Globemaster II aircraft crashed three minutes after takeoff from Tachikawa, Japan, killing all 129 people on board. At the time, the crash was tied for the deadliest in aviation history, and is notable for being the second aviation accident to kill more than 100 people; the crash of a Luftwaffe Me-321 Gigant glider and its three Bf-110 tow planes during operational trials in 1941 also resulted in 129 fatalities.

United States nuclear weapons were stored secretly at bases throughout Japan following World War II. Secret agreements between the two governments allowed nuclear weapons to remain in Japan until 1972, to move through Japanese territory, and for the return of the weapons in time of emergency.