The AN/APQ-13 radar was the first military radar converted to civilian use as a weather warning radar. About 30 systems were converted, starting in late 1945. They were installed in the aircraft at military bases. [1]

The last operational APQ-13 was removed from the Fort Sill, Oklahoma post weather station in October 1977 for display at what is now the National Museum of the United States Air Force. The museum intended to display it in its original configuration as a navigation and bombing radar, but would note the radar's much longer history as an operational weather radar. [2]

The AN/APQ-13 weather radars were generally replaced by the AN/CPS-9, which was specifically designed as a weather radar. [1] 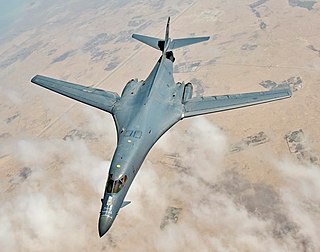 The Rockwell B-1 Lancer is a supersonic variable-sweep wing, heavy bomber used by the United States Air Force. It is commonly called the "Bone". It is one of three strategic bombers in the U.S. Air Force fleet as of 2021, the other two being the B-2 Spirit and the B-52 Stratofortress.

The Boeing B-47 Stratojet is a retired American long-range, six-engined, turbojet-powered strategic bomber designed to fly at high subsonic speed and at high altitude to avoid enemy interceptor aircraft. The primary mission of the B-47 was as a nuclear bomber capable of striking targets within the Soviet Union.

The General Dynamics F-111 Aardvark is a retired American supersonic, medium-range interdictor and tactical attack aircraft that also filled the roles of strategic nuclear bomber, aerial reconnaissance, and electronic-warfare aircraft in its various versions. The word "aardvark" is Afrikaans for "earth pig" and reflects the look of the long nose of the aircraft that might remind one of the nose of the aardvark. Developed in the 1960s by General Dynamics, it entered service in 1967 with the United States Air Force (USAF). The Royal Australian Air Force (RAAF) also ordered the type and began operating F-111Cs in 1973. 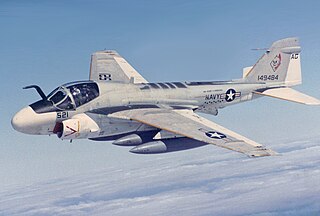 The Grumman A-6 Intruder is an American twinjet all-weather attack aircraft developed and manufactured by American aircraft company Grumman Aerospace that was operated by the U.S. Navy.

The Consolidated B-32 Dominator was an American heavy strategic bomber built for United States Army Air Forces during World War II, which had the distinction of being the last Allied aircraft to be engaged in combat during World War II. It was developed by Consolidated Aircraft in parallel with the Boeing B-29 Superfortress as a fallback design should the B-29 prove unsuccessful. The B-32 only reached units in the Pacific during mid-1945, and subsequently saw only limited combat operations against Japanese targets before the end of the war. Most of the extant orders of the B-32 were canceled shortly thereafter and only 118 B-32 airframes of all types were built. 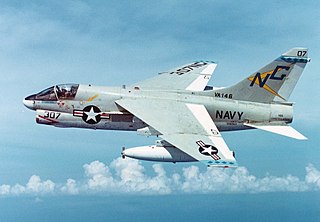 The LTV A-7 Corsair II is an American carrier-capable subsonic light attack aircraft designed and manufactured by Ling-Temco-Vought (LTV). 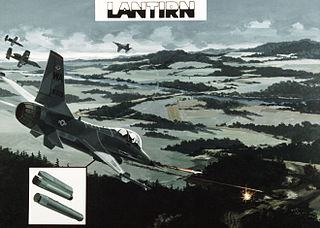 Low Altitude Navigation and Targeting Infrared for Night, or LANTIRN, is a combined navigation and targeting pod system for use on the United States Air Force fighter aircraft — the F-15E Strike Eagle and F-16 Fighting Falcon. LANTIRN significantly increases the combat effectiveness of these aircraft, allowing them to fly at low altitudes, at night and under-the-weather to attack ground targets with a variety of precision-guided weapons.

H2S was the first airborne, ground scanning radar system. It was developed for the Royal Air Force's Bomber Command during World War II to identify targets on the ground for night and all-weather bombing. This allowed attacks outside the range of the various radio navigation aids like Gee or Oboe, which were limited to about 350 kilometres (220 mi). It was also widely used as a general navigation system, allowing landmarks to be identified at long range. 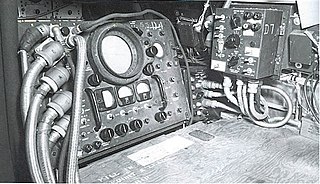 H2X, officially known as the AN/APS-15, was an American ground scanning radar system used for blind bombing during World War II. It was a development of the British H2S radar, the first ground mapping radar to be used in combat. It was also known as the "Mickey set" and "BTO" for "bombing through the overcast" radar. 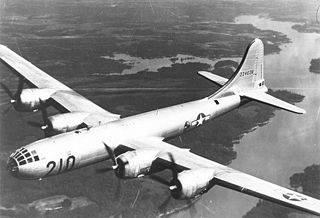 The Boeing B-29 Superfortress was an aircraft produced in many experimental and production models.

Terrain-following radar (TFR) is a military aerospace technology that allows a very-low-flying aircraft to automatically maintain a relatively constant altitude above ground level and therefore make detection by enemy radar more difficult. It is sometimes referred to as ground hugging or terrain hugging flight. The term nap-of-the-earth flight may also apply but is more commonly used in relation to low-flying military helicopters, which typically do not use terrain-following radar. 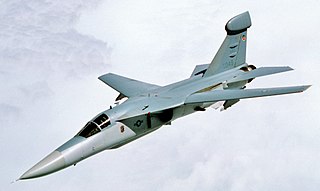 The General Dynamics–Grumman EF-111A Raven is an electronic-warfare aircraft designed to replace the EB-66 Destroyer in the United States Air Force. Its crews and maintainers often called it the "Spark-Vark", a play on the F-111's "Aardvark" nickname.

AN/APQ-116 is one of the most numerous terrain-following radars (TFRs) produced in the world, and with over 500 units built, it was a member of a family of TFRs consisted of nearly two dozen models, all of which are based on the same general design principle. First developed by Texas Instruments, and later produced by Raytheon when the latter purchased the radar business of the former.

A bombsight is a device used by military aircraft to drop bombs accurately. Bombsights, a feature of combat aircraft since World War I, were first found on purpose-designed bomber aircraft and then moved to fighter-bombers and modern tactical aircraft as those aircraft took up the brunt of the bombing role.

Airborne Interception radar, or AI for short, is the British term for radar systems used to equip aircraft in the air-to-air role. These radars are used primarily by Royal Air Force (RAF) and Fleet Air Arm night fighters and interceptors for locating and tracking other aircraft, although most AI radars could also be used in a number of secondary roles as well. The term was sometimes used generically for similar radars used in other countries. 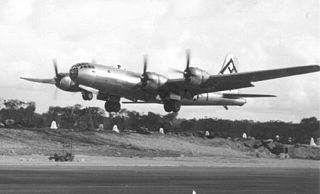 The AN/APQ-7, or Eagle, was a radar bombsight system developed by the US Army Air Force. Early studies started in late 1941 under the direction of Luis Alvarez at the MIT Radiation Laboratory, but full-scale development did not begin until April 1943. By this time US-built, higher frequency systems promising better performance over the existing British H2S radar were entering production. Eagle's even higher resolution was considered important to Air Force planners who preferred precision bombing but were failing to deliver it, and high hopes were put on the system's abilities to directly attack small targets like docks and bridges.