Acacia montana, commonly known as mallee wattle, is a shrub species endemic to south-eastern Australia. The species was first formally described in 1842 by English botanist George Bentham from plant material collected from the "highlands near the Liverpool Plains" in New South Wales. [1] The Latin specific epithet montana refers to mountains or coming from mountains. [2] 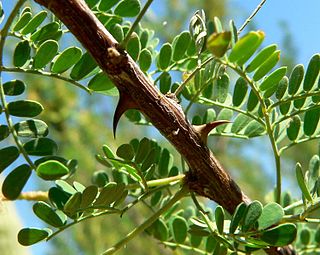 Acacia s.l., known commonly as mimosa, acacia, thorntree or wattle, is a polyphyletic genus of shrubs and trees belonging to the subfamily Mimosoideae of the family Fabaceae. It was described by the Swedish botanist Carl Linnaeus in 1773 based on the African species Acacia nilotica. Many non-Australian species tend to be thorny, whereas the majority of Australian acacias are not. All species are pod-bearing, with sap and leaves often bearing large amounts of tannins and condensed tannins that historically found use as pharmaceuticals and preservatives.

Sclerophyll is a type of vegetation that has hard leaves, short internodes and leaf orientation parallel or oblique to direct sunlight. The word comes from the Greek sklēros (hard) and phyllon (leaf).

Mallee may refer to: 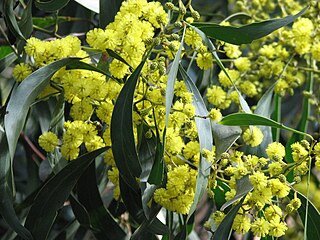 Acacia pycnantha, most commonly known as the golden wattle, is a tree of the family Fabaceae native to southeastern Australia. It grows to a height of 8 m (26 ft) and has phyllodes instead of true leaves. Sickle-shaped, these are between 9 and 15 cm long, and 1–3.5 cm wide. The profuse fragrant, golden flowers appear in late winter and spring, followed by long seed pods. Plants are cross-pollinated by several species of honeyeater and thornbill, which visit nectaries on the phyllodes and brush against flowers, transferring pollen between them. An understorey plant in eucalyptus forest, it is found from southern New South Wales and the Australian Capital Territory, through Victoria and into southeastern South Australia. 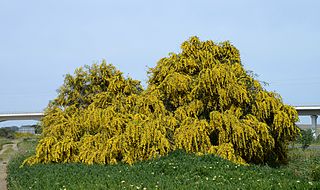 Acacia, commonly known as the wattles or acacias, is a large genus of shrubs and trees in the subfamily Mimosoideae of the pea family Fabaceae. Initially, it comprised a group of plant species native to Africa and Australia, with the first species A. nilotica described by Linnaeus. 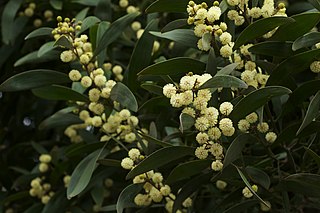 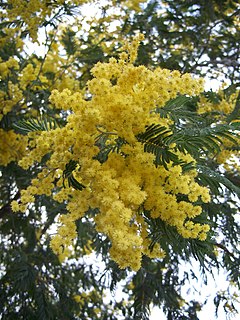 Acacia dealbata, the silver wattle, blue wattle or mimosa, is a species of flowering plant in the legume family Fabaceae, native to southeastern Australia in New South Wales, Victoria, Tasmania, and the Australian Capital Territory and widely introduced in Mediterranean, warm temperate, and highland tropical landscapes. 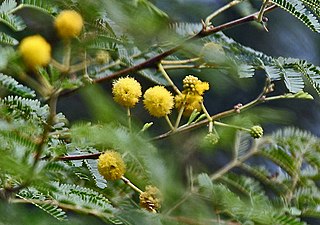 Vachellia nilotica is a tree in the family Fabaceae. It is native to Africa, the Middle East and the Indian subcontinent. It is also a Weed of National Significance in Australia as well as a Federal Noxious Weed in the United States.

Acacia parramattensis, commonly known as Parramatta wattle, is a tree of the family Fabaceae native to the Blue Mountains and surrounding regions of New South Wales. It is a tall shrub or tree to about 15 m (50 ft) in height with finely divided bipinnate leaves and yellow flowers that appear over summer. It generally grows in woodland or dry sclerophyll forest on alluvial or shale-based soils, generally with some clay content. 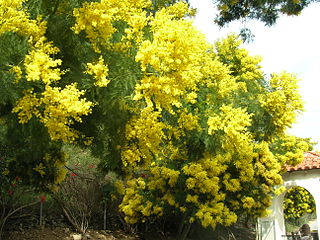 Acacia penninervis, commonly known as mountain hickory wattle, or blackwood, is a perennial shrub or tree 2–8m high, which is native to Australia.

Acacia buxifolia, commonly known as box-leaf wattle, is shrub species that is endemic to eastern Australia. 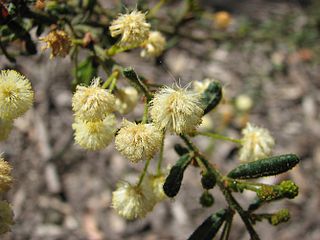 Acacia aspera, commonly known as rough wattle, is a spreading shrub which is endemic to south-eastern Australia. It grows to up to 2 metres high and has phyllodes which are 10 to 30 mm long and 2 –4 mm wide. The pale yellow to gold globular flowerheads appear singly or in groups of two in the axils of the phyllodes in July to September, followed by curved or coiled seed pods which are 20 to 70 mm long and 3 to 5 mm wide. 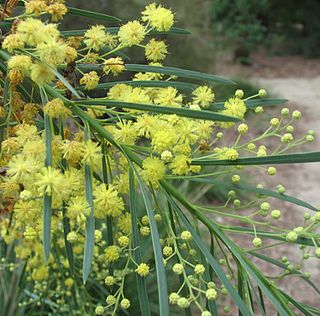 Acacia flocktoniae is a shrub species that is endemic to Australia.

Acacia pubescens, also known as the downy wattle, is a species of wattle found in the Sydney Basin in eastern New South Wales. It grows as a shrub to small tree from 1 to 5 m high. As with all wattles, it has leaf-like structures known as phyllodes instead of leaves, which are compound (pinnate) and measure 1.5–6.5 cm (0.59–2.56 in) in length. The globular yellow flowers appear in spring. The downy wattle is classified as vulnerable; much of its habitat has vanished with the growth of the city of Sydney. 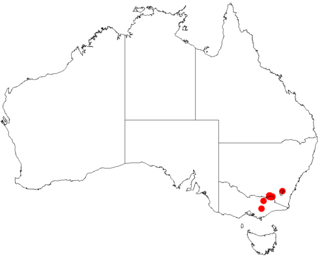 A. montana may refer to:

William Vincent Fitzgerald, was an Australian botanist. He described five genera and about 210 species of plants from Western Australia, including 33 Acacia and several Eucalyptus species. He also collected for other botanists such as Ferdinand von Mueller and Joseph Maiden and was known through his work on orchids. Eucalyptus fitzgeraldii was named for him by William Blakely.