The Arghun dynasty was a dynasty of either Mongol, [1] Turkic or Turco-Mongol ethnicity, [2] who ruled over the area between southern Afghanistan, and the Sindh province Pakistan from the late 15th century to the early 16th century. The Arghuns claimed their descent and name from Ilkhanid-Mongol Arghun Khan. [3] Arghun rule can be divided into two branches: the Arghun branch of Dhu'l-Nun Beg Arghun that ruled until 1554, and the Tarkhan branch of Muhammad 'Isa Tarkhan that ruled until 1591. [2]

In the late 15th century the Timurid sultan of Herat, Husayn Bayqarah, appointed Dhu'l-Nun Beg Arghun as governor of Kandahar. Dhu'l-Nun Beg soon began to ignore the authority of the central government in Herat and in around 1479 he began expanding in the direction of Baluchistan, taking over Pishin, Shal and Mastung. In 1485 his sons Shah Beg Arghun and Muhammad Mukim Khan also seized Sibi from the Samma dynasty of Sindh, although this gain was only temporary. [1]

The Arghuns ultimately lost control of their portion of Afghanistan to the Timurid prince Babur, who had been expelled from Transoxiana by the Uzbeks and had made his way south to Husayn Bayqarah's kingdom. In 1501/1502 Mukim had peacefully gained the submission of Kabul, which was in chaos after the death of its ruler Ulugh Beg II. [5] This was contested by Babur, who besieged and took the city in 1504; Mukim fell back to Kandahar. [6]

After Dhu'l-Nun Beg's death Babur decided that as long as Shah Beg and Mukim remained in Kandahar they would remain a threat to them. In 1507 or 1508 he attacked them, but the brothers saved their position by agreeing to submit to the Uzbek Muhammad Shaybani. In the following years Babur spent his time fighting against the Uzbeks in an attempt to regain Samarkand, giving Shah Beg and Mukim a degree of respite. [1]

Shah Beg Arghun, however, seems to have realized that in the long term it would be impossible to hold Kandahar against Babur. In 1520, in the hopes of establishing a new power base, he invaded Sindh, where the Samma dynasty was struggling under Jam Feroz. Shah Beg defeated Jam Feroz's army and proceeded to sack Thatta. The two sides agreed to a peace, where Shah Beg gained the upper half of Sindh (Thatta) while the Sammas retained the lower half (Bukkur). Jam Feroz almost immediately broke this agreement, but was defeated by Shah Beg and forced to flee to Gujarat. This marked the end of Samma rule in Sindh, as Shah Beg gained control of the whole region. [1]

In 1522 Babur took Kandahar after a drawn-out siege and annexed it. [7] Following this, Shah Beg Arghun made Bukkur (Lower Sindh) his official capital. He died in 1524 and his son Shah Husayn succeeded him. Shah Husayn had the Khutba read in Babur's name and attacked Multan, probably at Babur's insistence. Multan, which was ruled by the Langah, fell in 1528 after an extended siege and Shah Husayn appointed a governor of the city. Shortly after Shah Husayn departed Multan for Thatta, however, the governor was thrown out of the city. The rebels administered Multan for a time independently, but soon afterward submitted to the Mughal Empire, which had been founded by Babur after his capture of Delhi in 1526. [8]

In 1540 Shah Husayn had to deal with the arrival of Babur's successor Humayun, who had been expelled from medieval India by Sher Shah Suri. Humayun implored Shah Husayn to provide assistance in fighting against Sher Shah Suri, but was unable to convince him to do so. Sometime after this Humayun later attempted to wrest Sindh from Shah Husayn, but the latter was able to force a stalemate. The Mughal Emperor eventually agreed to leave Sindh and made his way to Kandahar in 1543. [9]

Shah Husayn became increasingly incapable of ruling as he approached the end of his life. Because of this, the nobles of Sindh decided to elect Mirza Muhammad 'Isa Tarkhan, who was a member of a senior branch of the Arghuns, as their ruler in 1554. Shah Husayn was set aside and died childless in 1556. [9]

During the civil war between Shah Husayn and Muhammad 'Isa Tarkhan, the latter had sent a request for the help to the Portuguese at Bassein. A 700-man force under the command of Pedro Barreto Rolim sailed up to Thatta in 1555, only to find that Muhammad 'Isa Tarkhan had already won the conflict and there was no need for their assistance. Furious at the governor of Thatta's refusal to pay them, the Portuguese sacked the defenseless city and killed several thousand people. [10]

Mirza Muhammad Baqi committed suicide in 1585, and was succeeded by his son Mirza Jani Beg. In 1591 Akbar sent an army to conquer lower Sindh. Jani Beg put up a resistance but was defeated by the Mughal forces and his principality was annexed. In 1599 he died of delirium tremens. [9] 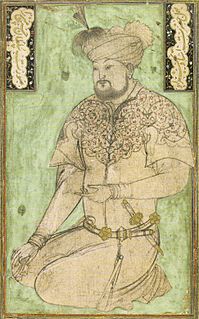 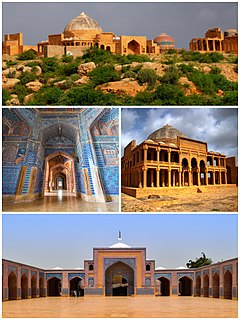 Thatta is a city in the Pakistani province of Sindh. Thatta was the medieval capital of Sindh, and served as the seat of power for three successive dynasties. Thatta's historic significance has yielded several monuments in and around the city. Thatta's Makli Necropolis, a UNESCO World Heritage Site, is site of one of the world's largest cemeteries and has numerous monumental tombs built between the 14th and 18th centuries designed in a syncretic funerary style characteristic of lower Sindh. The city's 17th century Shah Jahan Mosque is richly embellished with decorative tiles, and is considered to have the most elaborate display of tile work in the South Asia. 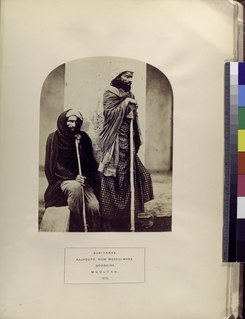 Muslim Rajputs are the descendants of Rajputs of Northern regions of the Indian subcontinent who are followers of Islam. They converted from Hinduism to Islam during the medieval period in India, retaining their surnames such as Rana and Chauhan. Today, Muslim Rajputs can be found in present-day Northern India and Pakistan. They are further divided into different clans.

The Samma dynasty was a medieval dynasty in the Indian subcontinent, that ruled in Sindh, and parts of Kutch, Punjab and Balochistan from c. 1351 to c. 1524 CE, with their capital at Thatta in modern Pakistan; before being replaced by the Arghun dynasty.

Thatta District is located in the southern area, locally called Laar, of the province of Sindh, Pakistan. Its capital is Thatta. It is home to a large necropolis of Makli. In 2013, several talukas were separated to form the new Sujawal District.

Jám Nizámuddín II, also known as Jam Nizam al-Din or Jám Nindó, was the Sammah Sultan of Sindh between 1461 and 1508 CE. He was the most famous ruler of the Samma dynasty, which ruled Sindh, parts of Punjab and Balochistan from 1351 to 1551 CE. His capital was Thatta in modern-day southern Pakistan. The Samma dynasty reached the height of its power during the reign of Nizamuddin, who is still recalled as a hero, and whose rule is considered the golden-age of Sindh.

Muhammad Zaman Mirza (1496–1539) was a Timurid prince, and general to Mughal Emperors Babur and Humayun. He claimed himself as the ruler of Gujarat in 1537 but did not gain actual control. 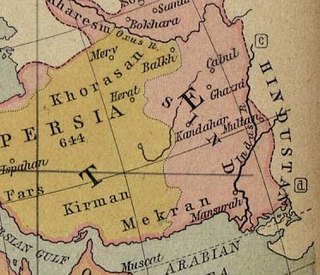 In 1504 Babur besieged Kabul and took the city from the Arghuns under Mukim Beg Arghun to become the new king of Kabul and Ghazni regions. The territory gave him respite from his Uzbek troubles in Central Asia and allowed him to build his nascent kingdom into a strong and formidable power in later years, enough to be able to conquer northern India. 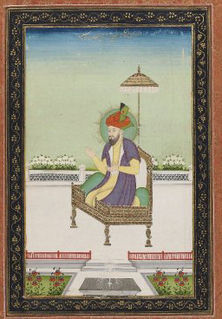 Umar Shaikh Mirza II was the ruler of the Fergana Valley. He was the fourth son of Abu Sa'id Mirza, the Emperor of the Timurid Empire in what is now Kazakhstan, Uzbekistan, Afghanistan and eastern Iran.

Badi' al-Zaman Mirza was a Timurid ruler of Herat from 1506 to 1507. He was the son of Husayn Bayqarah, who was a great-great-grandson of Timur Beg.

Babur had planned an expedition against Kandahar in 1506, which was governed by Shah Shuja better known as Shah Beg Arghun. Babur had marched towards Shniz where Wardak Afghans were residents. He had not decided yet whether or not to proceed against Kandahar when he held a war council in which his brother Jahangir Mirza II and Baqi Cheghaniani suggested instead of taking Qalati Ghilji. Qalati Ghilji was bestowed on Mukim Beg Arghun by his father Dhul-Nun Beg Arghun. Mukim's partisans, Farrukh Arghun and Kara Bilut, held it at this time on his part. On reaching Tazi, Sher Ali Chihreh and Kuchek Baqi Dewana, with some others, had formed the plan of deserting. Babur instantly had them seized, Sher Ali Chihreh was executed, having deprived the others of their arms and horses, he let them go.

Mubarak Khan Lashari or more popular as Darya Khan Lashari , was a famous general of Samma Dynasty of Sindh, a powerful statesman and regent at the court of Samma ruler Jam Feroz According to other sources his original name was Qabooliyo and he was Sammo by caste, whose deeds of valour are sung all over Sindh to this day.
Darya Khan was adopted son and prime minister of Jam Nizamuddin II who defeated the Argun army in the Battle of Jalwakhir near Bibi Nani in the Bolan Pass.This victory made Darya Khan Lashari, the 'Dollah' (Hero) of Sindh.On his deathbed, Jam Nizamuddin,entrusted to Darya Khan the care of his kingdom,of his treasures,his family, and his son Jam Feroz.
Darya Khan was real son of land and icon of periotism who fought for the freedom of homeland till his death and martyred while fighting bravely in the Battle of Fatehpur when an arrow hit him in throat on 21 December 1521 A.D. and thus ended the reign of Jam Feroz as an independent ruler.

Abu Sa'id Mirza occupied Herat on July 19, 1457. But he had to immediately abandon the city in order to deal with the Balkh revolt by the sons of Abdal-Latif Mirza, one of whom he killed in battle while the other Juki Mirza escaped to the steppes in the north under the protection of Abul-Khayr Khan, the Khan of the Uzbek principality of Tura, a part of the empire of Desht-i Kipchak region that lies to the east of Ural mountains. 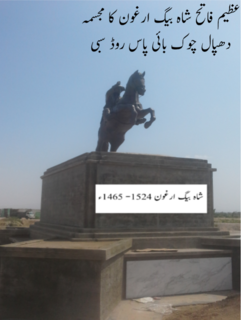 Shah Beg Arghun was the son of Zunnun Beg Arghun. He was the commander-in-chief and head of the nobles at the court of Sultan Hussain Mirza King of Khurasan and Governor of Kandahar in 1488, after the invasion of Babur in Kabul and Kandahar.