Linares was the State Senator for the 33rd Senate District, representing the Connecticut River Valley in the Connecticut Senate, including the towns of Chester, Clinton, Colchester, Deep River, East Haddam, East Hampton, Essex, Haddam, Lyme, Old Saybrook (part), Portland, and Westbrook. He was the ranking Republican on the Planning and Development Committee.

After exploring a run for numerous statewide offices, Linares settled in January on the State Treasurer's race. [5] [6] Linares received support from many of his State Senate colleagues but failed to raise enough money to qualify for the Citizens' Election Program and ultimately could not assemble enough support from Connecticut Republicans to win at the Connecticut GOP convention. [7] Linares was defeated by Salisbury investment executive Thad Gray. [8] Linares's campaign message was built on his record as a proven winner of elections but he undercut his conservative credentials by voting against and then for DACA immigration bills in the Connecticut legislature. [9] Linares supported Governor Dan Malloy's budget at a critical deadline. [10] Linares was seen late in the switch round of voting pushing delegates and his staff hard for more votes, but reached a point of no return when the Farfield delegation made Gray's lead insurmountable. [11] [12] Linares has asked for time to talk to his wife Caroline Simmons (D-Stamford) who is expecting the couple's first child, before deciding on whether to challenge Gray in the primary in August. [13] Linares has decided to challenge Gray in the August primary but fired his campaign manager and is considering moving to the independent ballot before the August primary if he fails to pick up momentum quickly. [14] Linares has stayed in the race but hired a Washington DC based campaign operative to manage his campaign. [15]

Linares is the son of Art Linares Sr., a Cuban exile. Linares earned his B.S. in entrepreneurship from the University of Tampa

Linares has aroused controversy by touting his experience running a small business on the campaign trail. Linares claims he cofounded and ran Greenskies, a solar energy company, but Linares was residing in Tampa, Florida during Greenskies early years in Connecticut and was never involved in the day-to-day management of the company. [16] Greenskies was built and funded by Linares's father, Art Linares Sr. and Mike Silvestrini, the company's current president, although Linares does appear to have received some of the profit from the company's sale in 2017. [17] Linares drives a Tesla. [18] Robert Landino, CEO of former Centerplan Construction, who was fired from missing building deadlines of Dunkin' Donunts Park, was a primary investor. [19]

Linares is married to a Democratic Representative in the CT General Assembly House of Representatives, Caroline Simmons of Stamford. He proposed in a full page advertisement in the Stamford Advocate. [20] Simmons and Linares cannot share a legal residence while they both remain in the state legislature, so Linares is giving up his seat in the State Senate to pursue statewide office. [21]

Eric Dean Coleman is a Democratic politician in the United States. He served as state senator of Connecticut's 2nd District, representing Bloomfield, Hartford, and Windsor. He served as a state representative from 1983 to 1994, and held the position of Deputy President Pro Tempore in the Connecticut Senate.

The 2010 Connecticut gubernatorial election took place on November 2, 2010, to elect the 88th Governor of Connecticut. Incumbent Republican Governor Jodi Rell had announced in a press conference in Hartford on November 9, 2009, that she would not seek re-election in 2010. The sites Cook Political Report and CQ Politics both rated the election as a toss-up. This was the first open seat gubernatorial election in the state since 1994.

Linda McMahon, formerly CEO of World Wrestling Entertainment, ran for U.S. Senator from Connecticut from September 16, 2009, to November 4, 2010. On May 21, 2010, she won a majority of support from the Connecticut Republican Party. She ran as a Republican, promising lower taxes, fiscal conservatism, and job creation. McMahon spent $50 million of her own money on the campaign, allowing her to refuse campaign donations from special interest groups. She gained name recognition and popularity over her Republican opponents, including Rob Simmons, the prior frontrunner.

Kevin P. Lembo is a Democratic elected official, currently the Connecticut State Comptroller, the statewide elected official responsible for reporting on state finances, administering health care plans for public employees and retirees, and paying the state's bills. He first took office on January 5, 2011. Lembo is the first openly gay individual to be elected to statewide office in Connecticut.

Joe Aresimowicz is a former Democratic member of the Connecticut House of Representatives and a former Speaker of the House. From 2013 to 2017, he served as Majority Leader.

The Board of Regents for Higher Education (BOR) is a government body in the U.S. state of Connecticut that oversees the Connecticut State Colleges & Universities (CSCU). CSCU and the BOR were created on July 1, 2011, consolidating the governance of the state's twelve community colleges, four state universities, and Charter Oak State College. The BOR assumed the powers and responsibilities of the respective former Boards of Trustees and the Board for State Academic Awards; it also retains many responsibilities for setting statewide policy of the former Board of Governors for Higher Education.

Kevin Witkos is a Republican member of the Connecticut Senate, representing the 8th District since 2009. He has served as Deputy Senate Republican President Pro Tempore since January 2017 and previously served as Minority Leader Pro Tempore from 2014 to 2016 and Caucus Chairman for Outreach since 2013. Witkos served as the State Representative from the 17th district which includes Canton and part of Avon from 2003 to 2008. 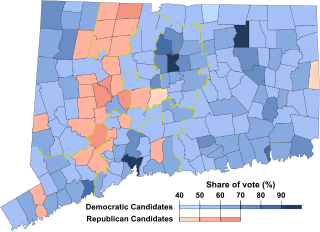 Caroline Simmons is a State Representative in Stamford, Connecticut representing the 144th District. She is the youngest woman legislator in Connecticut state office. She is married to former Republican State Senator Art Linares.

Corwin Albert "Corry" Bliss is an American political consultant and campaign manager to Republican Party (GOP) campaigns. In December 2016, he was named Executive Director of the American Action Network and Congressional Leadership Fund, one of the leading independent political organizations and SuperPACs in the U.S. On his appointment, the New York Times referred to Bliss as "one of his party's most closely watched young strategists." 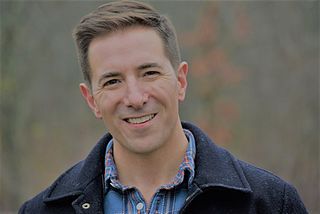 Shawn T. Wooden is an American attorney and politician who has been serving as the state treasurer of Connecticut since January 2019.

The 2022 Connecticut gubernatorial election will take place on November 8, 2022, to elect the Governor of Connecticut. Incumbent Democratic Governor Ned Lamont will be eligible to seek a second term but has not yet indicated if he will do so.

Carlo Leone is an American politician currently serving as the senior adviser to ConnDOT commissioner Joseph Giulietti. Leone formerly represented the 27th District of the Connecticut State Senate as a Democrat from 2011 until his resignation in 2021. The 27th District encompasses Stamford (Part) and Darien (Part). While in the State Senate, he served as Deputy President Pro Tempore as well as Chair of the Transportation Committee. Leone also served in the Connecticut House of Representatives representing the 148th District from 2003-2011. As a Democrat, he served as the Deputy Majority whip while serving in the House of Representatives. Prior to his political career, Leone also served in the United States Air Force from 1981 to 1987. Following his military service, Leone worked as a Financial analyst/Control specialist at Xerox from 1987 to 2004. On January 5, 2021, Leone resigned from the State Senate to serve as senior adviser to ConnDOT commissioner Joseph Giulietti.