The women's football team is one of the most successful clubs ever in Norway, with 6 top flight championships and 5 cup championships. Due to financial difficulties at the end of 2008 the team's licence to play in the Toppserien was revoked, and the team members then joined Stabæk IF's football group, Stabæk Fotball, which set up a new women's team. NFF gave Asker's place in the Toppserien to Stabæk Fotball. Asker's second team became Asker's first team, playing in the 2. divisjon, and they now have a recruiting arrangement with Stabæk Fotball.

The men's team currently play in the 2. divisjon, the third tier of the Norwegian football league system.

On 13 July 2012, four players – one of them from Asker – were arrested by police due to match fixing allegations in games involving Aker and Follo FK. [1] Asker's 7–1 loss over Frigg was deemed suspicious because of the odd score line and high bettings placed on the game. [2]

Kolbotn IL Fotball is a sub-section under the sports club Kolbotn IL from Kolbotn, Norway. The club started football in 1916 and organized football as a semi-autonomous sub-section in 1960.

Arna-Bjørnar Fotball is a Norwegian football club from Arna, Bergen.

Lindy Melissa Løvbræk Wiik is a Norwegian footballer who plays for Urædd FK and the Norway women's national football team. 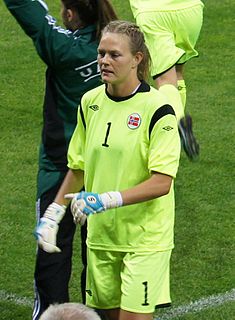 Lisa-Marie Woods is a Norwegian professional football midfielder. She is currently playing at Asheville City SC of the Women's Premier Soccer League as a forward. She has previously played for Asker SK and LSK Kvinner in the Toppserien FC Indiana & Ottawa Fury in North America's USL W-League as well as Kolbotn, Stabæk, and Fortuna Hjørring in Denmark's Elitedivisionen, BIIK Kazygurt in the Kazakhstani women's football championship, and Perth Glory in Australia's W-League.

Siri Merete Nordeide Grønli is a Norwegian football defender, the daughter of a football trainer. She played for IL Høyang before starting school at NTG Bærum and joining Asker SK as a 16-year-old. She was an Asker player from 2000 to 2008 until joining Stabæk Fotball Kvinner (SFK) at the beginning of 2009 with most of Asker's first team. 2012 was her 13th season in the Norwegian elite league, the Toppserien, except for a season in which Asker were demoted (2006).

Fotballaget Fart is a Norwegian football club based in Vang outside Hamar. The club is most noted for their women's team which played in Toppserien in 2008 and 2012. Their home matches are played at Fartbana. Norway international footballers Thorstein Helstad and Kristin Bekkevold started their careers at Fart.

The 2009 Toppserien was the twenty-third season of top-tier women's football in Norway since its establishment in 1987. A total of twelve teams contested the league, consisting of ten who competed in the previous season and two promoted from the 1. divisjon. Running from 13 April to 31 October 2009, it was won by Røa for the third consecutive year. As winners, Røa qualified for the Round of 32 of the 2010–11 UEFA Women's Champions League as the sole representative from Norway. Because Norway had dropped to ninth place in the UEFA coefficient rankings for 2010–11, the runners-up in the Toppserien could no longer enter the Qualifying Round of the Champions League, as had been the case in the previous season.

The 2010 Toppserien was the twenty-fourth season of top-tier women's football in Norway since its establishment in 1987. A total of twelve teams contested the league, consisting of ten who competed in the previous season and two promoted from the 1. divisjon. The season ran from 5 April to 11 November 2010, and was won by Stabæk, their first ever title. As champions, they also qualified for the Round of 32 of the 2011-12 UEFA Women's Champions League.

Stabæk Fotball Kvinner is Stabæk IF's women's football team, started on 23 October 2008 with a core of players from Asker. Asker had lost its licence to play in the top league after a failure to meet financial targets, and Stabæk's chairman Mimi Berdal arranged for the new team to be formed within Stabæk IF. The team was immediately joined by other players including Solveig Gulbrandsen.

The 2020 1. divisjon was the 36th season of the 1. divisjon, the second-tier Norwegian women's football division, and the 19th season under the current format. The season started on 11 July 2020 and ended on 22 November 2020