The inhabitants of Egersund first started playing football late in the 19th century, after influence from the English pottery-workers in the city. In the beginning the football was not organized, but during the spring of 1909 Egersund Fodboldsklubb was founded. The club, who played in kits with yellow and black stripes, did not play any competitive matches, but is today considered the forerunner of Egersunds IK. After the First World War, the gymnastics club Egersunds TF created a football-team, and Egersunds IK was founded in September 1919 when the football section of Egersunds TF broke out to create its own club. The club soon joined the Football Association of Norway, and played its first match against Vidar. [1]

Egersunds IK first match in the Norwegian Cup was a 0–3 loss against Viking in the first round of the 1925 Norwegian Cup. The club played in local leagues until 1939, when they qualified for the top-tier of the new nationwide league, Norgesserien (League of Norway). The club's first season was interrupted by the Second World War, and when the league was reorganized after the war, Egersund ended up at the second tier. Further relegations followed, and the club has never been in the top tier of Norwegian football again. In 1957, Egersund were promoted to the second tier, and started one of the better periods of the club's history. A cup match away at Viking in Stavanger in 1960, drew a crowd of 4,269, the greatest attendance for any Egersund match, home or away. In the 1961 Norwegian Cup, Egersund eliminated Flekkefjord and Start to reach the third round of the Norwegian Cup, for the first time in history, where they lost 3–0 against Skeid at Bislett Stadion. [1]

In the early 2000s, Egersund played most seasons in the 3. divisjon, regularly fighting for promotion to the 2. divisjon. In 2006, the club employed former Northern Ireland international Jimmy Quinn as manager, but he left after a brief time. In 2011, the club finished second in the 3. divisjon behind Start 2, As Start was relegated from Tippeligaen, their reserve could not play at the third tier and Egersund was promoted instead. [2] The next season the team managed to survive a season in 2. divisjon without being relegated, for the first time in nearly 30 years. The club also reached the third round of the Norwegian Cup in 2012, for the first time since 1961, after eliminating Vidar 11–10 in a penalty shoot-out. [3]

After five successful years at the helm, Jone Mathiesen resigned as head coach in late 2012, being replaced by former Norway international Bengt Sæternes. [1] After an inconsistent 2013-season, Sæternes guided EIK to second place behind promoted Åsane in 2014, before leaving for Sandnes Ulf in November that year. He was replaced by former Swedish International Magnus Powell, who also managed to steer his team to a runners up spot behind Ullensaker/Kisa in 2015. Powell resigned in November 2015 to take over at Levanger FK. In December 2015 EIK appointed former Rangers player Maurice Ross as their new manager.

Kjell Iversen was the first former Egersunds-player to represent Norway, when he made his debut against Kuwait in 1982. [1] Bengt Sæternes is another former Egersund player that has been capped for Norway. Jørgen Tengesdal, Kai Ove Stokkeland, Johan Lædre Bjørdal, Valon Berisha, Veton Berisha, Zlatko Tripić and Stian Koldal has played in Tippeligaen after starting their career in Egersund. Most of these players have moved to Viking, which helps Egersund with development of young players. Tripic' transfer to Molde in 2011, caused resentment in Viking, who considered discontinuing the cooperation with Egersund. [4]

Bryne Fotballklubb is a professional football club in Bryne, Norway, that competes in the 1. divisjon, the second tier of Norwegian football.

Hannes Þorsteinn Sigurðsson is an Icelandic football manager and former player who played as a striker. He is currently the manager of German club FC Deisenhofen.

FK Vidar is an association football club from Stavanger, Norway. They currently play in the 3. divisjon, the fourth highest level in the Norwegian football league system.

Makhtar Thioune is a Senegalese footballer who plays as a central midfielder for Hinna Fotball. He has previously played for Sarpsborg 08, Molde, Viking and Alta in Norway, Karlsruher SC in Germany and Şanlıurfaspor in Turkey.

Stavanger IF Fotball, the football division of Stavanger Idrettsforening, is a football club from Stavanger, Norway. In Rogaland, they are colloquially called Sif or Stavanger. 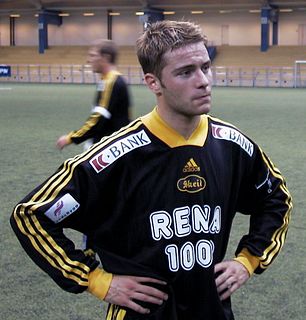 Kenneth Sola is a Norwegian footballer who plays as a defender for Sandnes Ulf. 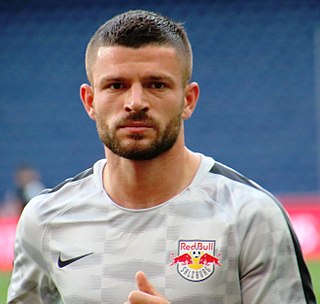 The 2012 2. divisjon season began on 14 April 2012 and ended on 27 October 2012. The league consisted of 56 teams divided into 4 groups of 14 teams. The four group-winners, Elverum, Kristiansund, Vard Haugesund and Follo was promoted to the 1. divisjon, while the bottom three teams in each groups was relegated to the 3. divisjon.

Stian Rokås Michalsen is a Norwegian footballer who plays as a winger for Egersund.

Sondre Flem Bjørshol is a Norwegian footballer who plays as a right-back for Viking FK.

The 2021 season is Viking's 3rd consecutive year in Eliteserien, and their 71st season in the top flight of Norwegian football. The club participates in the Eliteserien and the Norwegian Cup. It is the club's first season with Bjarte Lunde Aarsheim and Morten Jensen as managers.