BBC America is an American basic cable network that is jointly owned by BBC Studios and AMC Networks. [1] The channel primarily airs sci-fi and action series and films, as well as selected programs from the BBC (such as its nature documentary series).

As of September 2018, BBC America is available to about 80.9 million television households (87.8% of pay television customers) in the United States. [3]

BBC America was launched on March 29, 1998, [4] presenting a mixture of comedy, drama and lifestyle programs from BBC Television and other British television broadcasters including ITV and Channel 4. In the channel's early days, it focused on repeats of popular lifestyle shows such as Changing Rooms and Ground Force . BBC America's head of television programming later stated that the channel needed to establish a niche, since non-British viewers found the lifestyle shows appealing. [5] Most of the newer programs appeared as part of BBC America's evening schedule.

The network removed the British soap opera EastEnders from its schedule in 2003 due to low ratings; however, the program's removal from BBC America provoked complaints from viewers, which caught media attention. [6] [7] [8]

After CEO Paul Lee was appointed president of ABC Family in 2009, the network appointed Bill Hilary from Comedy Central to serve as its chief executive officer. Hilary appointed Kathryn Mitchell to the new position of general manager. Under Hilary's tenure, BBC America was restructured; it moved its main offices to New York City and had its programming budget increase substantially. The channel was led by Garth Ancier, who served as the president of BBC Worldwide Americas from February 2007 until 2010, when he was succeeded by former MTV Networks executive Herb Scannell. Meanwhile, Perry Simon serves as general manager. [9]

In 2014, AMC Networks acquired a 49.9% equity stake in BBC America for $200 million, and replaced Discovery Communications as its managing partner. As part of the deal, AMC Networks also took on the responsibility of negotiating U.S. broadcast and advertising sales for the BBC World News channel. AMC Networks CEO Josh Sapan stated that the deal gave his company "a powerful collection of networks that are among the most critically acclaimed, with distinct dramas and other potent content that creates a deep connection with viewers", while BBC Worldwide CEO Tim Davie considered it "an opportunity to grow the creative quality and ambition from an already high base." [10] [11]

AMC Networks is also a partner in the US operations of BritBox, an over-the-top subscription service focused on British television operated by BBC Studios and ITV plc. [13] [14]

Some of the programs on the channel are edited either for adult content or to allow for commercials. Occasionally, comedy shows are run in specially formatted 40-minute blocks and a few first-run drama programs are broadcast in a longer block that allows them to run to their original broadcast length. Additional series that has been previously broadcast may periodically return to the schedule as part of the network's rotation of daytime programming.

In the mid-2000s, BBC America produced a few of its own shows along with some joint productions, including Sharpe's Challenge, part of the Sharpe series of made-for-television movies and co-produced with ITV; and The State Within and Jekyll , which were co-productions with the BBC. The first original series produced solely by the channel was Copper , which premiered in the summer of 2012. [15]

BBC America has also branched into co-producing British series, including Robin Hood , The Musketeers, Killing Eve , Mood and from its fourth series, the revival of Doctor Who (until 2022). [16] They also co-produced the Canadian series Orphan Black .

BBC America used to broadcast BBC World News each Monday through Friday morning from 6:00 to 8:00 am Eastern and Pacific Time. All news programs now air exclusively on the BBC World News channel, also distributed by AMC Networks in the United States. [17]

The weekday morning (6:00–9:00 am Eastern) simulcast used to include BBC World News bulletins, World Business Report , Sport Today, Asia Today , and a one-hour bulletin called World News Today . Most of these were removed from the schedule without any announcement on April 6, 2009. The weekend morning (6:00–6:30 am ET) simulcast was also abruptly dropped on April 4, 2009. According to BBC America, the simulcast was dropped because of disappointing ratings. [18]

The network was in discussions to unveil a weekly news program fronted by Newsnight host Jeremy Paxman, who was to introduce a synopsis of Newsnight items with an international aspect and was expected to bring his brash interviewing style to bear on American politicians. An international edition of Newsnight debuted on February 29, 2008, in the 10-pm time slot. This program was cancelled in November 2008, but the announcement of the program's cancellation was not made until April 2009. [18]

During major breaking news events, the network sometimes replaces scheduled programs with coverage from BBC World News; the London bombings in July 2005 was one example. BBC World News's American coverage started out sparse, but has expanded within the last decade on several providers throughout the United States, generally alongside BBC America as part of AMC Networks' retransmission consent negotiations (one previous example is New York City-based Cablevision, which did not carry BBC America until August 2011) or BBC World News America , an American-focused news program presented by Katty Kay and usually from Washington, DC, mainly carried by American public television stations through a distribution agreement with Washington PBS member station WETA-TV.

BBC America has carried coverage of the PDC World Darts Championship in simulcast with Sky Sports, with preliminary rounds streaming, and the finals airing on television. [20]

For similar BBC-branded channels outside the U.S. and the Caribbean, see International BBC television channels.

BBC America is available in Caribbean countries, such as Bermuda on One Communications's cable service, [21] and the World on Wireless service, [22] as well as the Bahamas on REVTV, [23] in Barbados on Flow, [24] in the Cayman Islands on Logic TV, [25] Grenada on Flow, [26] Telbo MiTV in Bonaire, [27] in Curaçao on Flow [28] and on SXM Cable & Data in Sint Maarten. [29] It is also available in the Pacific in the US territory of Guam on DoCoMo Pacific [30] and GTA Teleguam's IPTV service, [31] as well as in the Northern Marianas on DoCoMo Pacific. [30] 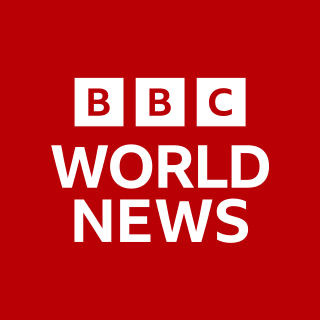 BBC World News is an international English-language pay television network, operated under the BBC Global News Limited division of the BBC, which is a public corporation of the UK government's Department for Digital, Culture, Media and Sport. According to its corporate PR, the combined seven channels of the Global News operations have the largest audience market share among all of its rivals, with an estimated 99 million viewers weekly in 2016/2017, part of the estimated 121 million weekly audience of all its operations.

ITV is a British free-to-air public broadcast television network. It was launched in 1955 as Independent Television to provide competition to BBC Television. ITV is the oldest commercial network in the UK. Since the passing of the Broadcasting Act 1990, its legal name has been Channel 3 to distinguish it from the other analogue channels at the time, BBC1, BBC2 and Channel 4.

BBC Two is a British free-to-air public broadcast television network owned and operated by the BBC. It covers a wide range of subject matter, with a remit "to broadcast programmes of depth and substance" in contrast to the more mainstream and popular BBC One.

Regular television broadcasts in the United Kingdom started in 1936 as a public service which was free of advertising, which followed the first demonstration of a transmitted moving image in 1926. Currently, the United Kingdom has a collection of free-to-air, free-to-view and subscription services over a variety of distribution media, through which there are over 480 channels for consumers as well as on-demand content. There are six main channel owners who are responsible for most material viewed.

BBC One is a British free-to-air public broadcast television network owned and operated by the BBC. It is the corporation's flagship network and is known for broadcasting mainstream programming, which includes BBC News television bulletins, primetime drama and entertainment, and live BBC Sport events.

BBC Canada was a Canadian English language specialty channel that mostly broadcast television series originally produced by the BBC, the public-service broadcaster of the United Kingdom. The channel was owned by Corus Entertainment and BBC Studios (20%).

ITV2 is a British free-to-air television channel owned by ITV Digital Channels, a division of ITV plc. It was launched on 7 December 1998. For a number of years, it had the largest audience share after the five analogue terrestrial stations, a claim now held by its sister service ITV3 both of which are freely available to a majority of households.

Simulcast is the broadcasting of programmes/programs or events across more than one resolution, bitrate or medium, or more than one service on the same medium, at exactly the same time. For example, Absolute Radio is simulcast on both AM and on satellite radio. Likewise, the BBC's Prom concerts were formerly simulcast on both BBC Radio 3 and BBC Television. Another application is the transmission of the original-language soundtrack of movies or TV series over local or Internet radio, with the television broadcast having been dubbed into a local language.

ITV Nightscreen was a scheduled programme on the ITV television network, consisting of a sequence of animated pages of information about ITV's upcoming programmes, features and special events, with easy listening music in the background. The programme was used to fill the station's overnight downtime, where a closedown would have once been used at the end of programmes. The programme was generally shown 7 days a week with the typical weekday show airing from 4:05am – 5:05am daily. However, on ITV's digital channels, the amount of Teleshopping affects how much Nightscreen is broadcast. The programme was also broadcast on all of ITV's +1 channels.

Night Network, Night Time and Night Shift were names given to the overnight schedule of the ITV network in the United Kingdom. The first ITV company began 24-hour broadcasting in 1986, with all of the companies broadcasting through the night by the end of 1988. At first, individual companies created their own services, however before too long, many of the smaller ITV stations began simulcasting or networking services from others.

This is a list of British television related events from 1997.

Channel 5 is a British free-to-air television network launched in 1997. It is the fifth national terrestrial channel in the United Kingdom and is owned by Channel 5 Broadcasting Limited, a wholly-owned subsidiary of American media conglomerate Paramount Global, which is grouped under Paramount Networks UK & Australia division.

BritBox is an online digital video subscription service, founded by BBC Studios and ITV plc, operating in nine countries across North America, Europe, Australia and South Africa. It is focused on British television series and films, mainly featuring current and past series and films supplied from two British terrestrial broadcasters of the BBC and ITV, in addition to original programming. BritBox is said to feature the biggest collection of British box sets available in one place, with additional original programming available from 2020.

A timeline of notable events relating to the BBC News Channel and its original name BBC News 24.

This is a timeline of overnight television broadcasting in the United Kingdom. It focuses on programming between midnight and 6am and includes details of when channels began into the night and 24-hour broadcasting.