A bay window is a window space projecting outward from the main walls of a building and forming a bay in a room. Originated from houses in San Francisco having windows overlooking the bay.

Bay window is a generic term for all protruding window constructions, regardless of whether they are curved or angular, or run over one or multiple storeys.

In plan, the most frequently used shapes are isosceles trapezoid (which may be referred to as a canted bay window [1] ) and rectangle. But other polygonal shapes with more than two corners are also common as are curved shapes. If a bay window is curved it may alternatively be called bow window. [2] Bay windows in a triangular shape with just one corner exist but are relatively rare.

A bay window supported by a corbel, bracket or similar is called an oriel window.

"Rawashin" is a traditional and distinctive style of corbelled bay window in Jeddah, Saudi Arabia [3] (e.g., as on the frontage of Nasseef House).

Most medieval bay windows and up to the Baroque era are oriel windows. They frequently appear as a highly ornamented addition to the building rather than an organic part of it. Particularly during the Gothic period they often serve as small house chapels, with the oriel window containing an altar and resembling an apse of a church. Especially in Nuremberg these are even called Chörlein (lit. 'little apse/ choir '), with the most famous example being the one from the parsonage of St. Sebaldus Church.

In Islamic architecture, oriel windows such as the Arabic mashrabiya are frequently made of wood and allow viewing out while restricting visibility from the outside. Especially in warmer climates, a bay window may be identical to a balcony, with a privacy shield or screen.

Bay windows can make a room appear larger, and provide views of the outside which would be unavailable with an ordinary flat window. They are found in terraced houses, semis and detached houses as well as in blocks of flats.

Based on British models, their use spread to other English-speaking countries like Ireland, the US, Canada and Australia. Following the pioneering model of pre-modern commercial architecture at the Oriel Chambers in Liverpool, they feature on early Chicago School skyscrapers, where they often run the whole height of the building's upper storeys.[ citation needed ] They also feature in bay-and-gable houses commonly found in older portions of Toronto.

Bay windows were identified as a defining characteristic of San Francisco architecture in a 2012 study that had a machine learning algorithm examine a random sample of 25,000 photos of cities from Google Street View. [4] 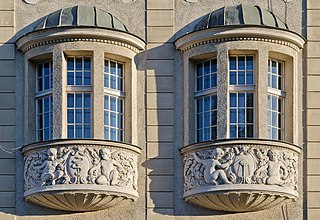 An oriel window is a form of bay window which protrudes from the main wall of a building but does not reach to the ground. Supported by corbels, brackets, or similar cantilevers, an oriel window is most commonly found projecting from an upper floor but is also sometimes used on the ground floor. 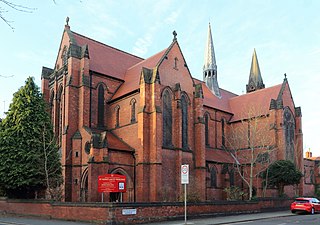 The Church of St Agnes and St Pancras is in Ullet Road, Toxteth Park, Liverpool, England. It is recorded in the National Heritage List for England as a designated Grade I listed building, and is an active Anglican church in the diocese of Liverpool, the archdeaconry of Liverpool and the deanery of Toxteth and Wavertree. Pevsner described it as "by far the most beautiful Victorian church of Liverpool...an epitome of Late Victorian nobility in church design". 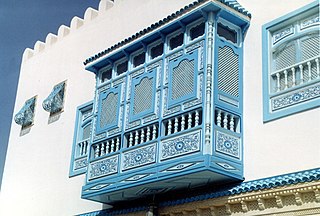 A mashrabiya, also either shanshūl (شنشول) or rūshān (روشان), is an architectural element which is characteristic of traditional architecture in the Islamic world and beyond. In Turkish it is called şahnişin, from Persian, and this has been adopted into Greek as sachnisi.

Hornby Castle is a country house, developed from a medieval castle, standing to the east of the village of Hornby in the Lune Valley, Lancashire, England. It occupies a position overlooking the village in a curve of the River Wenning. The house is recorded in the National Heritage List for England as a designated Grade I listed building.

Walmoor Hill is a large house in an elevated position overlooking the River Dee on the west side of Dee Banks, Chester, Cheshire, England. It is recorded in the National Heritage List for England as a designated Grade II* listed building. The authors of the Buildings of England series describe it as a "house of considerable size and panache". 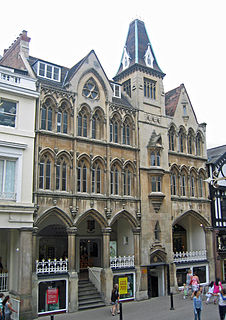 Crypt Chambers is at 28–34 Eastgate Street and 34–40 Eastgate Row, Chester, Cheshire, England. It is recorded in the National Heritage List for England as a designated Grade I listed building and incorporates a section of the Chester Rows. 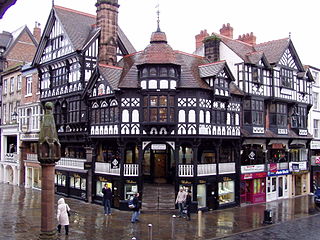 1 Bridge Street, Chester, is located at the junction of Bridge Street and Eastgate Street at Chester Cross in the centre of the city of Chester, Cheshire, England. Its architecture is that of the black-and-white revival, it incorporates part of the Chester Rows, and is recorded in the National Heritage List for England as a designated Grade II* listed building. Because of its prominent position and its black-and-white architecture, the historian Simon Ward has described it as an "iconic" building.

3–31 Northgate Street is a terrace of shops, offices and a public house on the west side of Northgate Street, Chester, Cheshire, England. All the buildings have a set-back ground floor with a covered walkway, are timber-framed in their upper storeys, and are listed buildings, being graded II* or II. The part of the terrace comprising numbers 5–31 is known as Shoemakers' Row, or Sadler's Row.

The Grosvenor Club and North and South Wales Bank is a building at 47–57 Eastgate Street, Chester, Cheshire, England. It is recorded in the National Heritage List for England as a designated Grade II listed building, and continues to be used as a bank.

30 Bridge Street, Chester is a shop in Chester, Cheshire, England. It stands on a corner on the west side of the street and the south side of Commonhall Street, and contains a section of the Chester Rows. It is recorded in the National Heritage List for England as a designated Grade II listed building.

The Freemasons Tavern is a 19th-century pub in the Brunswick Town area of Hove, part of the English city of Brighton and Hove. Built in the 1850s in a Classical style similar to the surrounding buildings in the rapidly growing Brunswick Town area, it was given a "spectacular" renovation when a restaurant was added in the 1920s. Local architecture firm Denman & Son designed an ornate Art Deco interior and an elaborate, brightly coloured entrance adorned with Masonic symbols; both the exterior and the interior survive in excellent condition. The tavern is a Grade II Listed building.

Dworcowa Street is one of the main streets of Bydgoszcz, in Downtown district. Many of its buildings are registered on Kuyavian-Pomeranian Voivodeship Heritage List.

Pomorska Street is an important street in downtown Bydgoszcz.

The Vicars’ Court or Vicars’ Choral in Lincoln, is situated in the Minster Yard to the south of Lincoln Cathedral. It was founded as a college of priests by Bishop Sutton in the late 13th century. These priests would take services in the Cathedral in the absence of the Prebendaries. The Vicars‘ Choral of Lincoln is one of eight such colleges in England, and it is also one of the earliest and best preserved. The great majority of the building survives. By 1305 the hall, the kitchen and certain chambers were finished. In 1328 lay brothers were admitted and further houses were built for them During the English Civil War, the buildings were badly damaged and afterwards were converted into four houses. 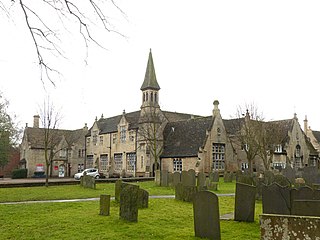 Edward Browning was an English architect working in Stamford.

The Metters Building is a heritage-listed office building at 154-158 Elizabeth Street, in the Sydney central business district, in the City of Sydney local government area of New South Wales, Australia. It was designed by Robertson and Marks and built by W. Gawne & Sons in 1914. It was added to the New South Wales State Heritage Register on 2 April 1999. 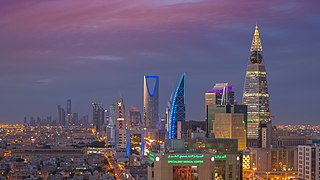 The Architecture of Saudi Arabia is adapted to its geography and climate, and reflects the uniqueness of Arabian culture. It is located on the Arabian Peninsula in Western Asia, with a Mediterranean and subtropical desert climate. The climate of different regions in the Kingdom of Saudi Arabia differs, the architecture and the method of construction. The vernacular and the postmodern architecture reflect the traditional culture and environment on Saudi Arabia. Mashrabiya as a special architecture element in Saudi Arabia fully demonstrate the wisdom of local residents.