The Borough of Harrogate is a local government district and borough of North Yorkshire, England. Its population at the census of 2011 was 157,869. [2] Its council is based in the town of Harrogate, but it also includes surrounding towns and villages. This includes the cathedral city of Ripon and almost all of the Nidderdale Area of Outstanding Natural Beauty.

The district is part of the Leeds City Region, and borders seven other areas; the Craven, Richmondshire, Hambleton and Selby districts in North Yorkshire, the York unitary authority area, and the Districts of Leeds and Bradford in West Yorkshire. It falls primarily within the HG, LS and YO postcode areas, while a very small amount lies within the BD area.

The most populous district of North Yorkshire, it is the county's fourth largest district, as well the seventh largest non-metropolitan district in England. It was previously the county's second largest district until 1 April 1996, when the parishes of Nether Poppleton, Upper Poppleton, Hessay and Rufforth were transferred from the Borough of Harrogate to become part of the newly formed York unitary authority. According to the 2001 census, these parishes had a population of 5,169.

Elections to the borough council are held in three out of every four years, with one third of the 54 seats on the council being elected at each election. After being under no overall control from the 2006 election, the Conservative party gained a majority at the 2010 election.

Following the 2016 United Kingdom local elections and subsequent by-elections, [3] the political composition of Harrogate is as follows: The last composition of the former 54 seat council.

Before boundary change came in.

The district is divided between three parliamentary constituencies: the whole of Harrogate and Knaresborough, the eastern part of Skipton and Ripon and the north western part of Selby and Ainsty

The following people and military units have received the Freedom of the Borough of Harrogate.

Nether Poppleton is a village and civil parish in the unitary authority of the City of York in North Yorkshire, England. It is by the west bank of the River Ouse and is adjacent to Upper Poppleton west of York. It is close to the A59 road from York to Harrogate. The village is served by Poppleton railway station on the Harrogate Line.

Upper Poppleton is a village and civil parish in the unitary authority of the City of York in North Yorkshire, England. It is situated by the west bank of the River Ouse adjacent to Nether Poppleton, and west of York close to the A59 from York to Harrogate. The village is served by Poppleton railway station on the Harrogate Line. According to the 2001 census, the parish had a population of 1,961, increasing to 1,997 at the 2011 Census. Before 1996, it was part of the Borough of Harrogate. 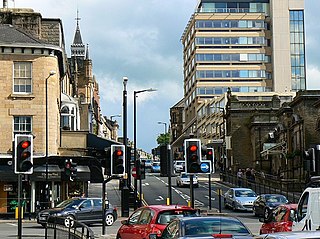 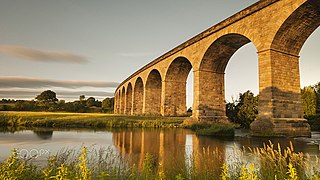 The Harrogate line is a passenger rail line through parts of North Yorkshire and the West Yorkshire area of northern England connecting Leeds to York by way of Harrogate and Knaresborough. Service on the line is operated by Northern, with a few additional workings by London North Eastern Railway starting and terminating at Harrogate. West Yorkshire Metro's bus and rail MetroCard ticket is available for journeys between Leeds and Harrogate. 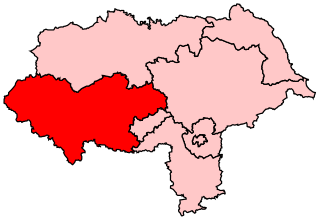 Skipton and Ripon is a constituency represented in the House of Commons of the UK Parliament since 2010 by Julian Smith, a Conservative. 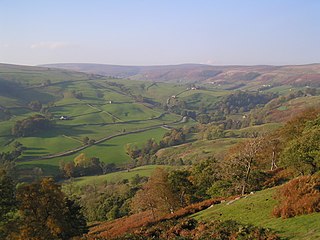 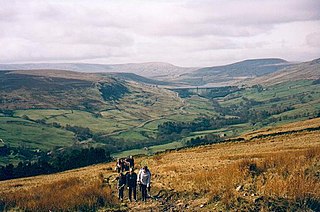 Nidderdale was a rural district in the West Riding of Yorkshire from 1938 to 1974. It was created from the combination of most of the disbanded rural districts of Great Ouseburn and Knaresborough.

Ripon and Pateley Bridge was a rural district in the West Riding of Yorkshire, England from 1937 to 1974.

Ripon was a constituency sending members to the House of Commons of the Parliament of the United Kingdom until 1983, centred on the city of Ripon in North Yorkshire.

Nidderdale Museum is a local and social history museum in the market town of Pateley Bridge in Nidderdale, one of the Yorkshire Dales, in North Yorkshire, England. The museum is housed in a former workhouse, and is normally open every day from 1.30 p.m. to 4.30 p.m. from 1 April to 31 October, and on Saturdays and Sundays from 1.30 p.m. to 4.30 p.m. over the winter. There is a small entry charge for adults. Accompanied children are free.

William Grainge was an English antiquarian and poet, and a historian of Yorkshire. He was born into a farming family in Dishforth and grew up on Castiles Farm near Kirkby Malzeard in the North Riding of Yorkshire, where he studied the archaeological site beneath the farm buildings, now known as Cast Hills settlement. Although he left school at age 12, he educated himself well enough to become a clerk to a solicitors' firm in Boroughbridge. He later established a bookshop in Harrogate and published numerous books on local history and topography, besides publishing a number of anonymous poems and discourses about local natural history.

Knapton is a village 3 miles (5 km) west of York in the City of York unitary authority and ceremonial county of North Yorkshire, England. It is bounded by the village of Acomb to the east, the B1224 to the south, the A59 to the north and the A1237 York Outer Ring Road to the west. 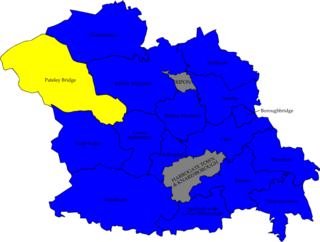 The 2008 Harrogate Council election took place on 1 May 2008 to elect members of Harrogate Borough Council in North Yorkshire, England. One third of the council was up for election and the council stayed under no overall control. 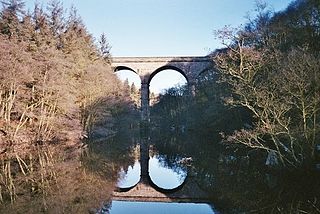 Media related to Borough of Harrogate at Wikimedia Commons