Bright's disease is a historical classification of kidney diseases that are described in modern medicine as acute or chronic nephritis. [1] It was characterized by swelling and the presence of albumin in the urine, and was frequently accompanied by high blood pressure and heart disease.[ citation needed ]

The symptoms and signs of Bright's disease were first described in 1827 by the English physician Richard Bright, after whom the disease was named. In his Reports of Medical Cases, [2] he described 25 cases of dropsy (edema) which he attributed to kidney disease. Symptoms and signs included: inflammation of serous membranes, hemorrhages, apoplexy, convulsions, blindness and coma. [3] [4] Many of these cases were found to have albumin in their urine (detected by the spoon and candle-heat coagulation), and showed striking morbid changes of the kidneys at autopsy. [5] The triad of dropsy, albumin in the urine, and kidney disease came to be regarded as characteristic of Bright's disease. [3]

Subsequent work by Bright and others indicated an association with cardiac hypertrophy, which Bright attributed to stimulation of the heart. Frederick Akbar Mahomed showed that a rise in blood pressure could precede the appearance of albumin in the urine, and the rise in blood pressure and increased resistance to flow was believed to explain the cardiac hypertrophy. [4]

It is now known that Bright's disease is caused by a wide and diverse range of kidney diseases; [1] [5] [6] thus, the term Bright's disease is retained strictly for historical application. [7] The disease was diagnosed frequently in diabetic patients; [4] at least some of these cases would probably correspond to a modern diagnosis of diabetic nephropathy.

Bright's disease was historically treated with warm baths, blood-letting, squill, digitalis, mercuric compounds, opium, diuretics, laxatives, [2] [8] and dietary therapy, including abstinence from alcoholic drinks, cheese and red meat. Arnold Ehret was diagnosed with Bright's disease and pronounced incurable by 24 of Europe's most respected doctors; he designed The Mucusless Diet Healing System, which apparently cured his illness. William Howard Hay, MD had the illness and, it is claimed, cured himself using the Hay diet. [9] 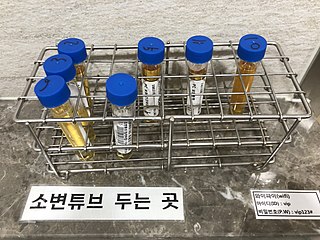 Proteinuria is the presence of excess proteins in the urine. In healthy persons, urine contains very little protein; an excess is suggestive of illness. Excess protein in the urine often causes the urine to become foamy. Severe proteinuria can cause nephrotic syndrome in which there is worsening swelling of the body.

Nephrotic syndrome is a collection of symptoms due to kidney damage. This includes protein in the urine, low blood albumin levels, high blood lipids, and significant swelling. Other symptoms may include weight gain, feeling tired, and foamy urine. Complications may include blood clots, infections, and high blood pressure.

Nephritis is inflammation of the kidneys and may involve the glomeruli, tubules, or interstitial tissue surrounding the glomeruli and tubules. It is one of several different types of nephropathy.

Renal functions include maintaining an acid–base balance; regulating fluid balance; regulating sodium, potassium, and other electrolytes; clearing toxins; absorption of glucose, amino acids, and other small molecules; regulation of blood pressure; production of various hormones, such as erythropoietin; and activation of vitamin D.

Urinalysis, a portmanteau of the words urine and analysis, is a panel of medical tests that includes physical (macroscopic) examination of the urine, chemical evaluation using urine test strips, and microscopic examination. Macroscopic examination targets parameters such as color, clarity, odor, and specific gravity; urine test strips measure chemical properties such as pH, glucose concentration, and protein levels; and microscopy is performed to identify elements such as cells, urinary casts, crystals, and organisms.

Chronic kidney disease (CKD) is a type of kidney disease in which there is gradual loss of kidney function over a period of months to years. Initially there are generally no symptoms; later, symptoms may include leg swelling, feeling tired, vomiting, loss of appetite, and confusion. Complications can relate to hormonal dysfunction of the kidneys and include high blood pressure, bone disease, and anemia. Additionally CKD patients have markedly increased cardiovascular complications with increased risks of death and hospitalization.

Serum albumin, often referred to simply as blood albumin, is an albumin found in vertebrate blood. Human serum albumin is encoded by the ALB gene. Other mammalian forms, such as bovine serum albumin, are chemically similar. 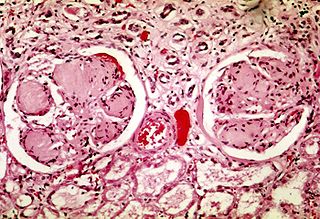 Diabetic nephropathy, also known as diabetic kidney disease, is the chronic loss of kidney function occurring in those with diabetes mellitus. Diabetic nephropathy is the leading causes of chronic kidney disease (CKD) and end-stage renal disease (ESRD) globally. The triad of protein leaking into the urine, rising blood pressure with hypertension and then falling renal function is common to many forms of CKD. Protein loss in the urine due to damage of the glomeruli may become massive, and cause a low serum albumin with resulting generalized body swelling (edema) so called nephrotic syndrome. Likewise, the estimated glomerular filtration rate (eGFR) may progressively fall from a normal of over 90 ml/min/1.73m2 to less than 15, at which point the patient is said to have end-stage renal disease. It usually is slowly progressive over years.

Hypertensive kidney disease is a medical condition referring to damage to the kidney due to chronic high blood pressure. It manifests as hypertensive nephrosclerosis. It should be distinguished from renovascular hypertension, which is a form of secondary hypertension, and thus has opposite direction of causation. 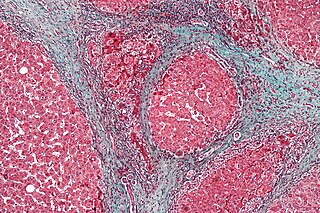 Hepatorenal syndrome is a life-threatening medical condition that consists of rapid deterioration in kidney function in individuals with cirrhosis or fulminant liver failure. HRS is usually fatal unless a liver transplant is performed, although various treatments, such as dialysis, can prevent advancement of the condition. 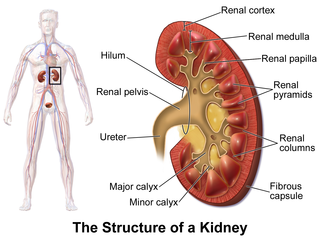 Microalbuminuria is a term to describe a moderate increase in the level of urine albumin. It occurs when the kidney leaks small amounts of albumin into the urine, in other words, when an abnormally high permeability for albumin in the glomerulus of the kidney occurs. Normally, the kidneys filter albumin, so if albumin is found in the urine, then it is a marker of kidney disease. The term microalbuminuria is now discouraged by Kidney Disease Improving Global Outcomes and has been replaced by moderately increased albuminuria. 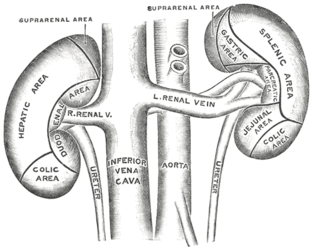 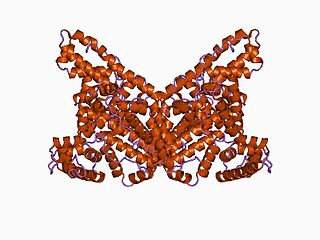 Hypoalbuminemia is a medical sign in which the level of albumin in the blood is low. This can be due to decreased production in the liver, increased loss in the gastrointestinal tract or kidneys, increased use in the body, or abnormal distribution between body compartments. Patients often present with hypoalbuminemia as a result of another disease process such as malnutrition as a result of severe anorexia nervosa, sepsis, cirrhosis in the liver, nephrotic syndrome in the kidneys, or protein-losing enteropathy in the gastrointestinal tract. One of the roles of albumin is being the major driver of oncotic pressure in the bloodstream and the body. Thus, hypoalbuminemia leads to abnormal distributions of fluids within the body and its compartments. As a result, associated symptoms include edema in the lower legs, ascites in the abdomen, and effusions around internal organs. Laboratory tests aimed at assessing liver function diagnose hypoalbuminemia. Once identified, it is a poor prognostic indicator for patients with a variety of different diseases. Yet, it is only treated in very specific indications in patients with cirrhosis and nephrotic syndrome. Treatment instead focuses on the underlying cause of the hypoalbuminemia. Albumin is an acute negative phase respondent and not a reliable indicator of nutrition status.

The Ringling brothers were seven American siblings who transformed their small touring company of performers into one of the largest circuses in the United States during the late 19th and early 20th centuries. Four brothers were born in McGregor, Iowa: Alfred T., Charles, John and Henry William, and the family lived in McGregor for twelve years, from 1860 until 1872. The Ringling family then moved to Prairie du Chien, Wisconsin, and finally settled in Baraboo, Wisconsin, in 1875. They were of German and French descent, the children of harness maker Heinrich Friedrich August Ringling (1826–1898) of Hanover, and Marie Salome Juliar (1833–1907) of Ostheim, in Alsace. In 1919, they merged their Ringling Brothers Circus with America's other leading circus troupe, Barnum and Bailey, ultimately creating the Ringling Bros. and Barnum & Bailey Circus, which operated for 98 years, until 2017.

A urine test strip or dipstick is a basic diagnostic tool used to determine pathological changes in a patient's urine in standard urinalysis.

Post-mortem chemistry, also called necrochemistry or death chemistry, is a subdiscipline of chemistry in which the chemical structures, reactions, processes and parameters of a dead organism is investigated. Post-mortem chemistry plays a significant role in forensic pathology. Biochemical analyses of vitreous humor, cerebrospinal fluid, blood and urine is important in determining the cause of death or in elucidating forensic cases.