The Cadillac Cyclone is a concept car built in 1959 by Cadillac. The Cyclone was never mass-produced as a production model. It currently resides within the GM Heritage Collection. [1]

One of the last cars designed by Harley Earl, the Cyclone was a testbed for futuristic styling and technology. Built on a 104" wheelbase chassis, it featured a front-mounted 390in3 engine, rear-mounted automatic transaxle, and an all-wheel independent suspension. Uniquely, the Cyclone's engine exhaust was ported out just ahead of the front wheels. It also featured a radar-operated collision avoidance system, with the radar sensors mounted in twin "nose-cones" on the front of the car. [2]

Of the Cyclone's stylistic features, the bubble top canopy was the most prominent. Silver coated for UV protection, the canopy automatically opened along with the sliding electrically operated doors. The canopy could also be stowed in the rear compartment, where it rested on a special air-bag base. [3]

The Cyclone's design was heavily inspired by the aviation and rocket designs of the 1950s. The original design of the Cyclone included larger tailfins (similar looking to the 1959 Cadillac lineup), adorned with the logo of the General Motors Air Transport Section (GMATS). These fins were reduced in size in 1964 (and the GMATS logo removed) to look more like the 1963-64 Cadillac range. [4]

The Cadillac Allanté is a two-door, two-seater luxury roadster marketed by Cadillac from 1987 until 1993. It used a Cadillac chassis and running gear with a body built in Italy by coachbuilder Pininfarina. It was expensive to produce with the complete bodies flown to Detroit for final assembly. Over 21,000 were built during its seven-year production run.

The Cadillac BLS is a compact executive car marketed in Europe by Cadillac, sharing General Motors' Epsilon architecture, as a restyled variant of the Saab 9-3. Development was carried out by Saab and the car was manufactured in Trollhättan, Sweden, alongside the Saab 9-3 and the Saab 9-5. Sales of the sedan began in March 2006, with a station wagon joining the line for 2007. Starting in 2007, the BLS was sold in the Middle East, Mexico, South Africa and South Korea. It was never sold in the United States or in Canada. 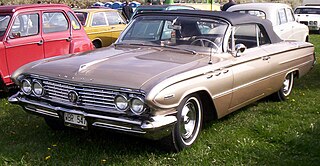 The Buick Invicta is a full-size automobile produced by Buick from 1959 to 1963. The Invicta was a continuation of the Buick Century concept that mated the standard size Buick LeSabre body with Buick's larger 401 cubic inch Nailhead V8 engine, yielding what was referred to as "the banker's hot rod." The name was derived from Latin and signified 'unconquerable, invincible, unbeatable, unvanquished' according to Buick Motor Division sales training materials. 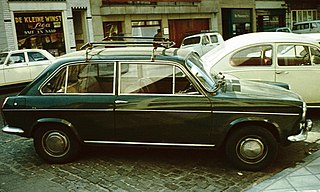 The Autobianchi Primula is a supermini economy car manufactured between 1964 and 1970 by the Italian automaker Autobianchi, partly owned by and later a subsidiary of the Fiat Group. The Primula was a prototype for Fiat's rack and pinion steering and is widely known for its innovative Dante Giacosa-designed front-wheel drive, transverse engine layout — that would be later popularized by the Fiat 128 to ultimately become an industry-standard front drive layout. 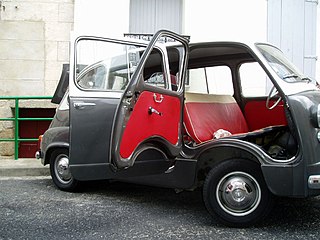 A bench seat is a full width continuous pad forming the front seat of automobiles. The second row of seating in most sedans is usually a bench. The third row of most SUVs and minivans, which may be forward-facing or rear-facing, is also a bench seat. 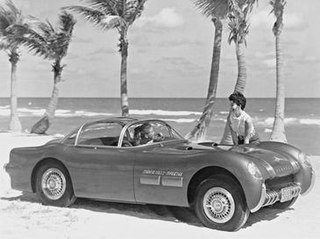 The Pontiac Bonneville Special is a Pontiac concept car unveiled at the General Motors Motorama in 1954, the first 2-seat sports car prototype the Division had ever produced. Conceived by renowned designer Harley J. Earl and hand built by Homer C. LaGassey Jr. and Paul Gilland, the "Special" is a grand touring sport coupé that incorporated innovative styling like a Plexiglas canopy with gull-wing windows on a sleek fiberglass body.

The Citroën Osée is a concept car designed by Pininfarina for the French car company Citroën. It was unveiled at the 2001 Geneva Motor Show.

The Maserati Birdcage 75th is a functional concept car designed and developed by a Pininfarina design team led by Lowie Vermeersch, including Jason Castriota and Giuseppe Randazzo under the direction of Ken Okuyama. It was first introduced at the 2005 Geneva Auto Show. It was named to honor the classic Maserati Birdcage race cars of the 1960s and Pininfarina's 75th anniversary. The Birdcage was the result of a collaboration between Maserati, Pininfarina and Motorola to showcase their technical expertise. The car was completed in just 2 months, following a fast pace design phase using 3D renderings. 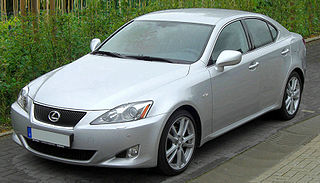 The Lexus IS (XE20) is the second generation of the Lexus IS line of compact executive cars. Sold by Lexus since 2005, the line includes multiple V6 gasoline-powered models, in four-door sedan and two-door coupé convertible body styles. Additional sedan models also feature inline-four diesel powertrains, and an F marque version, the IS F, features a V8 engine. A pre-production car of the second generation IS model was first shown at the 2005 Geneva Auto Show, with the production version debuting at the 2005 New York Auto Show. The second generation was only available as a sedan until the two-door coupé convertible variants debuted in 2008.

The Subaru VIZIV is a series of hybrid concept sports SUVs designed and built by Subaru, the first of which was unveiled at the 2013 Geneva Motor Show. The VIZIV series included several signature Subaru design features, such as the use of horizontally-opposed engines and all-wheel drive, and built on prior Subaru hybrid concepts such as the B9SC, B5-TPH, and Hybrid Tourer by using a three-motor layout. Since 2016, the VIZIV concept cars have previewed styling for upcoming production automobiles, and the hybrid powertrain has been dropped in favor of a conventional gasoline engine and all-wheel-drive.

The Lancia Diàlogos is an Italian luxury concept car that was presented in saloon form at the 1998 Turin Motor Show.

The Roewe RX5 is a compact crossover SUV that is manufactured by the Chinese manufacturer Roewe of SAIC Motor.

The Changan Eado (逸动) is a compact car produced by Chinese auto manufacturer Changan. It is not to be confused with the Changan Eado DT subcompact sedan.