The Cadillac STS (Seville Touring Sedan) is a mid-sized luxury 4-door sedan manufactured and sold by General Motors from 2004 to 2011 for the 2005 to 2011 model years. A version of the STS was sold in China as the SLS through 2013. It was equipped with a six-speed automatic transmission with performance algorithm shifting and driver shift control. [7]

The STS was the successor to the Cadillac Seville, [6] which beginning in 1987 was available as an upscale performance-oriented STS (for Seville Touring Sedan) version, and comfort-oriented SLS (for Seville Luxury Sedan). The next year, the STS received Cadillac's then-new Northstar System, including the aluminium DOHC L37 Northstar V8 engine.

While smaller than the full-size DTS, the more expensive STS was the flagship sedan of the Cadillac brand. [8]

The Cadillac STS was rated with a four star frontal and five star rear passenger crash test rating from the National Highway Traffic Safety Administration. [9] It was given an overall "Good" score in the Insurance Institute for Highway Safety frontal crash test and an "Acceptable" rating in the side impact test. [10] In the side impact test injury measurements to the driver's pelvis was rated "Poor" and for the torso "Acceptable." [11]

The front wheel drive Seville model name was retired in 2004, succeeded by an entirely new "STS" based on the rear wheel drive GM Sigma platform. The first Cadillac sedan to be offered with All wheel drive, it retained the Seville's high-performance Magnetic Ride Control suspension. The Cadillac STS was assembled at GM's Lansing Grand River facility in Lansing, Michigan along with the smaller CTS sedan.

The STS was updated for 2008. Changes included a refreshed exterior, with styling cues resembling the 2008 CTS, such as larger, more aggressive grille and chrome fender vents. The interior was updated, with new materials and a new steering wheel, though the overall interior design remained the same, despite previous rumors of an all-new interior similar to that of the Chinese-market SLS. The standard powertrain was a direct-injected 3.6 L V6 mated to a six-speed automatic transmission, which in the STS produced 302 hp (225 kW) and 272 lb⋅ft (369 N⋅m) of torque. It also offered enhanced safety features, including a lane departure warning system developed by Mobileye, a blind spot monitoring system, and an improved version of GM's StabiliTrak stability control system, which could operate the steering system in addition to the brakes to help correct a skid. Additionally, options previously limited to the V8 model (such as HID headlamps and Automotive head-up display) were available with the V6. The 2008 Cadillac STS debuted at the 2007 New York Auto Show. [12]

GM discontinued the production of the SLS in February 2013. [16]

The final STS was assembled on May 4, 2011. [24] The enlarged third generation rear-wheel drive CTS sedan introduced in 2013 as a 2014 model, similar in size and price to the STS, effectively succeeded it. 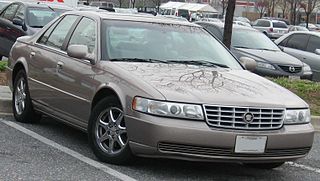 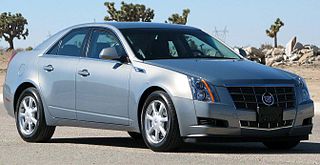 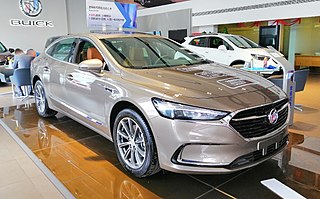 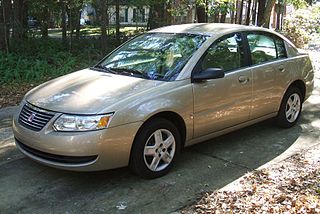 The Saturn Ion is a compact car sold by Saturn between the 2003 and 2007 model years. It used the GM Delta platform. The Ion replaced the Saturn S-Series in 2002, and was replaced by the new Saturn Astra in 2008. Production of the Ion ended on March 29, 2007. The Ion was the last Saturn passenger car built at the Spring Hill, Tennessee plant which was originally linked to the company's branding, with Saturn owners attending "homecoming" events at the plant. 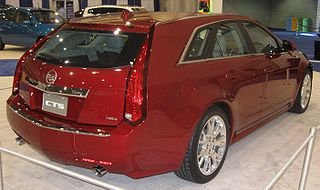 Sigma was General Motors' mid-size rear-wheel drive automobile platform. The architecture debuted in 2002 with the 2003 Cadillac CTS and is adaptable for all-wheel drive and extended wheelbase versions. 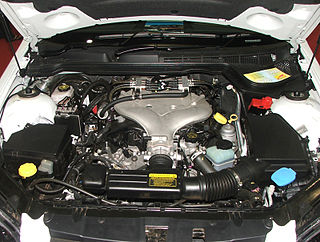 Cadillac was the first automobile maker in the world to mass-produce V8 engines. The company has produced many generations and variations of V8s since 1914. In 2010, when the Northstar engine series ended production, it became the last General Motors division to retain its own proprietary V8 design. This changed when Cadillac created the twin-turbo 'Blackwing' engine in 2019. 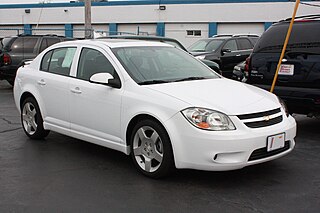 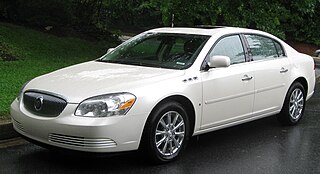 The Buick Lucerne is a full-size luxury car manufactured by General Motors from 2005 to 2011. Named for the city of Lucerne, Switzerland, it served as Buick's top-of-the-line sedan until it was replaced by the second generation Buick LaCrosse.

The Cadillac BLS is a compact executive car marketed in Europe by Cadillac, sharing General Motors' Epsilon architecture, as a restyled variant of the Saab 9-3. Development was carried out by Saab and the car was manufactured in Trollhättan, Sweden, alongside the Saab 9-3 and the Saab 9-5. Sales of the sedan began in March 2006, with a station wagon joining the line for 2007. Starting in 2007, the BLS was sold in the Middle East, Mexico, South Africa and South Korea. It was never sold in the United States or in Canada.

The 4T80E is a series of automatic transmissions from General Motors. Designed for transverse engine configurations, the series includes 4 forward gears. The 4Txx family is an evolution of the original Turbo-Hydramatic 125 transverse automatic introduced in the 1980 model year "X" body.

The 6L50 is a 6-speed longitudinally-mounted automatic transmission produced by General Motors. It is very similar in design to the larger 6L80/6L90, and is produced at GM Powertrain plants in Toledo, Ohio; Silao, Guanajuato, Mexico; and by the independent Punch Powerglide company in Strasbourg, France. This transmission features clutch to clutch shifting, eliminating the bands used on older transmission designs. The 6L50 debuted for the 2007 model year on the V8-powered versions of the Cadillac STS sedan and Cadillac SRX crossover, and replaces the 5L40-E and 5L50 in GM's lineup. The 6L45 version is used in certain BMW vehicles and the Cadillac ATS, as part of either rear-wheel drive and all-wheel drive powertrains. 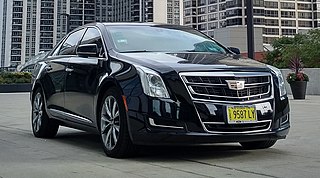