Calvin John Eldred (born November 24,1967) is an American former professional baseball pitcher who played for 14 seasons in Major League Baseball (MLB) from 1991 to 2005. He previously worked for the St. Louis Cardinals as a special assistant to general manager John Mozeliak,instructing minor league players for various on-field and off-field issues. On October 5th,2022,Eldred was relieved of his duties as pitching coach for the Kansas City Royals.

Eldred attended the University of Iowa while playing college baseball for the Hawkeyes,and was the Milwaukee Brewers' first round selection in the 1989 amateur draft. He made his MLB debut for the Brewers in September,1991,with whom he was a starting pitcher for nine seasons. He also played for the Chicago White Sox and the Cardinals.

After attending the University of Iowa and playing college baseball for the Hawkeyes,the Milwaukee Brewers selected Eldred in the first round of the 1989 amateur draft.

The Brewers traded Eldred with José Valentín to the Chicago White Sox for Jaime Navarro and John Snyder on January 12, 2000. Eldred pitched for the White Sox in 2000–01, but totaled just 22 starts. His record in 2000 was 10–2 and he was the AL Pitcher of the Month for June. He missed all of the 2002 season due to injury and signed as a free agent with the St. Louis Cardinals on December 18, 2002. He pitched in relief for the National League pennant-winning Cardinals in 2004, and made two appearances in the World Series. Eldred announced his retirement as a player on October 27, 2005. He was the Cardinals winner of the 2005 Darryl Kile Good Guy Award. [2]

Eldred also joined the Big Ten Network in the spring of 2009 as a college baseball analyst. He co-hosted the network's studio coverage of the 2009 Big Ten Baseball Tournament with Dave Revsine. He was a pregame color analyst for the team's telecasts on Fox Sports Midwest. He also was a special assistant to Cardinals' general manager John Mozeliak, instructing minor league players for various on-field and off-field issues. [3] Both of Cal's sons played collegiately. C.J. was a pitcher for the Iowa Hawkeyes and Luke was a pitcher for Dallas Baptist. C.J. was an undrafted free agent and has played for numerous professional teams.

In November 2017, Eldred was named the Kansas City Royals pitching coach. [4] He was fired on October 5, 2022, immediately after the season ended, with the 2022 team being worst in the American League for strikeouts, walks, hits allowed, runs allowed, and ERA. [5] [6] 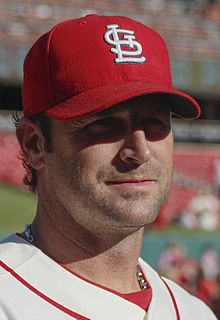 Michael Scott Matheny is an American former professional baseball player and former manager of the St. Louis Cardinals and Kansas City Royals of Major League Baseball (MLB). He played in MLB for 13 seasons as a catcher for the Milwaukee Brewers, Toronto Blue Jays, St. Louis Cardinals, and San Francisco Giants. Matheny later spent seven seasons as the manager of the Cardinals. One of the most accomplished defensive players of his era, he won four Rawlings Gold Glove Awards. As manager, Matheny's teams won one National League (NL) pennant and three NL Central division titles. 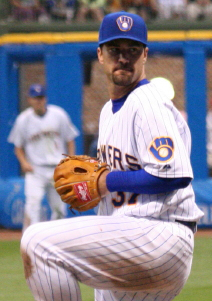 John Steven Mabry is an American former professional baseball player, broadcaster, and coach. He is a coach for the Kansas City Royals of Major League Baseball (MLB). He had 898 career hits in 3,409 at-bats, with 96 home runs and 446 RBI. He is 6 ft 4 in (1.93 m) tall, weighs 210 lb, bats left-handed and throws right-handed. John Mabry attended West Chester University of Pennsylvania and was inducted into their Athletics Hall of Fame. 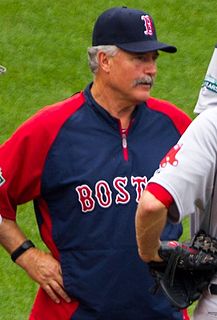 Robert Craig McClure is an American former professional baseball player and coach. He played in Major League Baseball as a left-handed pitcher from 1975 to 1993, most notably as a member of the Milwaukee Brewers with whom he won the 1982 American League pennant. Following his playing career, he has served as a coach for several MLB teams.

The following are the baseball events of the year 2007 throughout the world.

Jaime Navarro Cintrón is a former Puerto Rican baseball player and current pitching coach for the Uni-President Lions for the Chinese Professional Baseball League in Taiwan. Navarro was a 6-foot, 4-inch tall right-handed pitcher in the major leagues from 1989 to 2000, playing for the Milwaukee Brewers, Chicago Cubs, Chicago White Sox, and Cleveland Indians. He is the son of former Major League Baseball pitcher Julio Navarro.

Dyar K Miller is a retired professional baseball pitcher, coach and instructor. A product of Utah State, Miller pitched 13 seasons in professional baseball between 1968 and 1984. He also pitched all or parts of seven seasons in Major League Baseball (MLB) from 1975 to 1981 for the Baltimore Orioles, California Angels, Toronto Blue Jays, and the New York Mets. After his playing career, Miller coached and instructed for 28 seasons, mainly in the minor leagues. Most recently, he served as the Cardinals' bullpen coach in 2012. 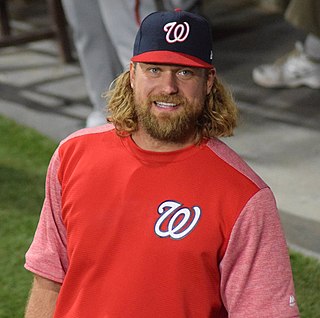 Trevor Jordan Rosenthal is an American professional baseball pitcher for the Milwaukee Brewers of Major League Baseball (MLB). He has played in Major League Baseball (MLB) for the St. Louis Cardinals, Washington Nationals, Detroit Tigers, Kansas City Royals and San Diego Padres. He made his MLB debut with the Cardinals on July 18, 2012. A power pitcher, Rosenthal is known for a fastball that is difficult for hitters to pick up and reaches velocities at or over 100 miles per hour (160 km/h). He throws and bats right-handed, stands 6 feet 2 inches (1.88 m) tall, and weighs 230 pounds (100 kg).

The Iowa Hawkeyes baseball program represents the University of Iowa in college baseball. The program started in 1890. It is a member of the Big Ten Conference and is the only NCAA Division I baseball program in the state of Iowa.

The St. Louis Cardinals 2013 season was the 132nd for the baseball team in St. Louis, Missouri, the 122nd season in the National League (NL), and the eighth at Busch Stadium III. On Opening Day, April 1, the St. Louis Cardinals played the 20,000th game in franchise history against the Arizona Diamondbacks, dating back to the start of their American Association (AA) play in 1882. Heading into the 2013 season, St. Louis had an all-time winning percentage of .518.

Marco Elias Gonzales is an American professional baseball pitcher for the Seattle Mariners of Major League Baseball (MLB). He has previously played in MLB for the St. Louis Cardinals. He attended Gonzaga University, where he played college baseball for the Gonzaga Bulldogs as a pitcher and first baseman.

The St. Louis Cardinals 2014 season was the 133rd for the franchise in St. Louis, Missouri, the 123rd season in the National League (NL), and the ninth at Busch Stadium III. The Cardinals entered 2014 as the defending NL champions.

Aaron Lee Brooks is an American professional baseball pitcher who is currently a free agent. He has previously played in Major League Baseball (MLB) for the Kansas City Royals, Oakland Athletics, Baltimore Orioles, and St. Louis Cardinals, and in the Korea Baseball Organization (KBO) for the Kia Tigers.

The following are the baseball events of the year 2015 throughout the world.

The St. Louis Cardinals 2015 season was the 134th for the Major League Baseball (MLB) franchise in St. Louis, Missouri, the 124th season in the National League (NL), and the 10th at Busch Stadium III. They entered the 2015 season as two-time defending NL Central division champions and having made four consecutive National League Championship Series (NLCS) appearances.

The following are the baseball events of the year 2018 throughout the world.