Castle of Sand (砂の器, Suna no utsuwa) is a 1974 Japanese police procedural directed by Yoshitarō Nomura, based on the novel Inspector Imanishi Investigates by Seicho Matsumoto. [1] [2]

Yoshitaro Nomura's 1974 film of Seicho Matsumoto's immensely popular detective story tells the tale of two detectives, Imanishi (Tetsuro Tamba) and Yoshimura (Kensaku Morita), tasked with tracking down the murderer of an old man, found bludgeoned to death in a rail yard. When the identity of the old man can't be determined, the investigation focuses on the only other clue: a scrap of conversation overheard at a bar between the old man and a younger one. A witness recalls the cryptic phrases "Kameda did this" and "Kameda doesn't change."

This sets off a wide-ranging investigation that covers vast swaths of geography, changing social mores, and time. The investigation ends with an emotional and heartbreaking conclusion, all the more shattering because the reason for the crime need no longer exists in the world. [3] 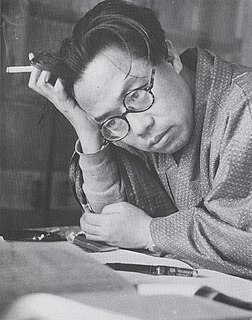 Seichō Matsumoto was a Japanese writer, credited with popularizing detective fiction in Japan.

Samurai Spy, also known as Spy Hunter, is a 1965 film directed by Masahiro Shinoda, based on a novel by Koji Nakada. The legendary ninja Sasuke Sarutobi tracks the spy Nojiri, while a mysterious figure named Sakon leads a band of men on their own quest for the wily Nojiri. Soon no one knows just who is who and what side anyone is on. Made during the height of the cold war, the film follows the lives of spies caught up in the power struggles of their times.

Yoshio Inaba was a Japanese actor best known for his role as Gorobei in Akira Kurosawa's Seven Samurai. In addition to his career in film, Inaba was also a prolific theater actor and a member of the prestigious Haiyuza Theatre Company. He died of a heart attack at the age of 77. 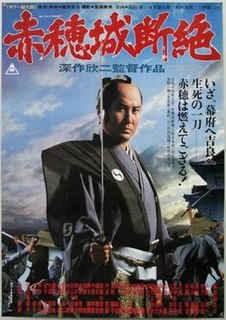 The Fall of Ako Castle is a 1978 Japanese historical martial arts period film directed by Kinji Fukasaku. It depicts the story of the forty-seven Ronin (Chūshingura). The film is one of a series of period films by Fukasaku starring Yorozuya Kinnosuke, including Shogun's Samurai. The film received one nomination for the Award of the Japanese Academy for best cinematography. 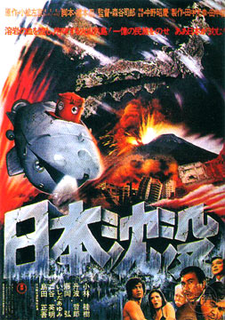 Tidal Wave is a 1973 film directed by Shiro Moritani. It is based on the 1973 novel Japan Sinks by Sakyo Komatsu. The film stars Keiju Kobayashi, Hiroshi Fujioka and Ayumi Ishida.

G-Men '75 was a long-running prime-time popular television detective series in Japan. It aired on Saturday nights in the 9:00–9:54 p.m. time slot on the Tokyo Broadcasting System (TBS) network from May 24, 1975 to April 3, 1982. A sequel, G-Men '82, followed, as did the specials. It had also been broadcast in Hong Kong and Taiwan. Since Hong Kong was one of the filming locations, it was very popular there. With several updates and cast changes, it ran for 7 years. Selected episodes are available on DVD.

Mt. Hakkoda is a 1977 Japanese film directed by Shirō Moritani. Based on the novelist Jirō Nitta's recounting of the Hakkōda Mountains incident, the film tells the story of two infantry regiments of the Imperial Japanese Army, consisting of 210 men, that tried to traverse the Hakkōda Mountains in the winter of 1902, in preparation for the anticipated Russo-Japanese War. The film was Japan's submission to the 50th Academy Awards for the Academy Award for Best Foreign Language Film, but was not accepted as a nominee.

The Naked Woman and the Gun is a 1957 black-and-white Japanese film directed by Seijun Suzuki.

Never Give Up is a 1978 Japanese film. It was directed by Junya Sato and produced by Haruki Kadokawa.

Fireflies in the North is a 1984 Japanese film directed by Hideo Gosha. The lead star is Tatsuya Nakadai.

Kiri no Hata is a 1965 Japanese film directed by Yoji Yamada. It is based on Seichō Matsumoto's novel of the same title.

Sanada Yukimura no Bōryaku is a 1979 Japanese film directed by Sadao Nakajima.

Aftermath of Battles Without Honor and Humanity'' (その後の仁義なき戦い) is a 1979 film directed by Eiichi Kudo.

The Battle of Port Arthur is a 1980 Japanese war film directed by Toshio Masuda. The Japanese title "Ni hyaku san kochi" means 203 Hill. The film depicts the fiercest battles in Siege of Port Arthur during the Russo-Japanese War 1904 - 1905.

Za Gokiburi is a 1973 Japanese action film directed by Tsugunobu Kotani. It is 2nd of Detective Gokiburi series. The film is based on Isao Shinoka's manga "Gokiburi Deka". Narugami Ryo is a detective nicknamed "Gokiburi"(cockroach).

Stakeout is a 1958 Japanese drama and crime film directed by Yoshitarō Nomura, based on a story by Seicho Matsumoto.