A cracker is a flat, dry baked food typically made with flour. Flavorings or seasonings, such as salt, herbs, seeds, or cheese, may be added to the dough or sprinkled on top before baking. [1] Crackers are often branded as a nutritious and convenient way to consume a staple food or cereal grain.

Crackers can be eaten on their own, but can also accompany other food items such as cheese or meat slices, dips, or soft spreads such as jam, butter, or peanut butter. Bland or mild crackers are sometimes used as a palate cleanser in food product testing or flavor testing, between samples. Crackers may also be crumbled and added to soup. [2] The modern cracker is somewhat similar to nautical ship's biscuits, [3] military hardtack, chacknels, [4] and sacramental bread. Other early versions of the cracker can be found in ancient flatbreads, such as lavash, pita, matzo, flatbrød, and crisp bread. Asian analogues include papadum and senbei.

In American English, the name "cracker" usually refers to savory or salty flat biscuits, whereas the term "cookie" is used for sweet items. Crackers are also generally made differently: crackers are made by layering dough, while cookies, besides the addition of sugar, usually use a chemical leavening agent, may contain eggs, and in other ways are made more like a cake. [5] In British English, crackers are sometimes called water biscuits, [6] [7] savory biscuits, or simply biscuits, though the latter also is used for sweet cookies. [8]

Crackers come in many shapes and sizes, such as round, rectangular, triangular, or irregular. Crackers sometimes have cheese or spices as ingredients, or even chicken stock.

Saltines and oyster crackers are often used in or served with soup. Additional types of crackers include cream crackers and water biscuits.

Graham crackers and digestive biscuits are also treated more like cookies than crackers, although they were both invented for their supposed health benefits, and graham crackers are sweet.

Mock apple pie is made using Ritz (or similar) crackers.

The characteristic holes found in many crackers are called "docking" holes. The holes are poked in the dough to stop overly large air pockets from forming in the cracker while baking. 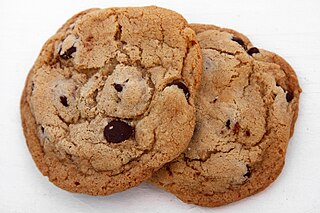 A cookie is a baked or cooked food that is typically small, flat and sweet. It usually contains flour, sugar and some type of oil or fat. It may include other ingredients such as raisins, oats, chocolate chips, nuts, etc.

Matzo, matzah, or matza is an unleavened flatbread that is part of Jewish cuisine and forms an integral element of the Passover festival, during which chametz is forbidden.

Nabisco is an American manufacturer of cookies and snacks headquartered in East Hanover, New Jersey. The company is a subsidiary of Illinois-based Mondelēz International. Nabisco's plant in Chicago, a 1,800,000-square-foot (170,000 m2) production facility at 7300 S. Kedzie Avenue, is the largest bakery in the world, employing more than 1,200 workers and producing around 320 million pounds of snack foods annually.

Ritz Crackers are a brand of snack cracker introduced by Nabisco in 1934. Outside the United States, the Ritz Cracker brand is made by a subsidiary of Mondelēz International. They are circular, salted lightly on one side, and have a small scalloped edge. A single serving contains 79 calories, 1 gram of protein and 4 grams of fat, or 70 calories and 2.5 grams of fat for the whole-wheat variety.

A biscuit is a flour-based baked food product. This article covers the type of biscuit found in Africa, Asia, and Europe, which is typically hard, flat, and unleavened. In North America, a biscuit is typically a soft, leavened quick bread, and is covered in the article Biscuit (bread). 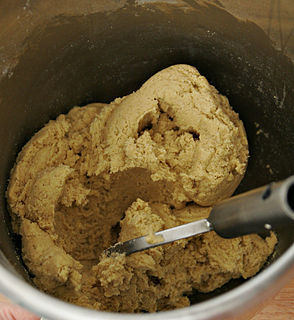 Dough is a thick, malleable, sometimes elastic paste made out of any grains, leguminous or chestnut crops. Dough is typically made by mixing flour with a small amount of water and/or other liquid, and sometimes includes flour yeast or other leavening agents as well as other ingredients such as various fats or flavorings.

Hardtack is a simple type of biscuit or cracker, made from flour, water, and sometimes salt. Hardtack is inexpensive and long-lasting. It is used for sustenance in the absence of perishable foods, commonly during long sea voyages, land migrations, and military campaigns. 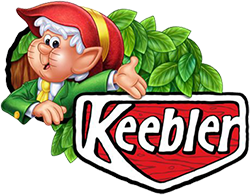 Cheez-It is a cheese cracker manufactured by the Kellogg Company through its Sunshine Biscuits division. Approximately 26 by 26 millimetres, the square crackers are made with wheat flour, vegetable oil, cheese made with skim milk, salt, and spices. 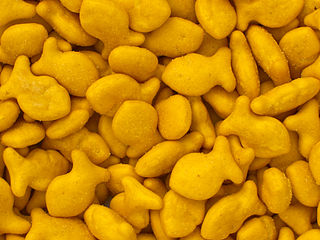 Goldfish are fish-shaped cheese crackers manufactured by Pepperidge Farm, which is a division of the Campbell Soup Company. The crackers have been available in several varieties and, since 1962, 40% of the crackers contain a small imprint of an eye and a smile. The brand's current marketing and product packaging incorporate this feature of the product: "The Snack That Smiles Back! Goldfish!", reinforced by Finn, the smiling mascot with sunglasses. The product is marketed as a "baked snack cracker" on the label with various flavors and varieties.

Sunshine Biscuits was an independent American baker of cookies, crackers, and cereals. The company, whose brand still appears today on a few products, was purchased by Keebler Company in 1996 which was subsequently purchased by Kellogg Company in 2000. Around that time, Sunshine Biscuits was headquartered in Elmhurst, Illinois, the same town in which Keebler was located until 2001.

A saltine or soda cracker is a thin, usually square cracker made from white flour, yeast, and baking soda, with most varieties lightly sprinkled with coarse salt. It has perforations over its surface, as well as a distinctively dry and crisp texture.

An animal cracker is a particular type of small cracker/cookie, baked in the shape of an animal, usually an animal either at a zoo or circus, such as a lion, a tiger, a bear or an elephant. The most common variety is light-colored and slightly sweet, but darker chocolate-flavored and colorful frosted varieties are also sold. Although animal tend to be sweet in flavor like cookies, they are made with a layered dough like crackers and are marketed as crackers and not as cookies.

A water biscuit or water cracker is a type of biscuit or cracker. Water biscuits are baked using only flour and water, without shortening or other fats usually used in biscuit production. They are thin, hard and brittle, and usually served with cheese or wine. Originally produced in the 19th century as a version of the ship's biscuit, water biscuits continue to be popular in Ireland and the United Kingdom, with the leading brands selling over seventy million packets a year.

Bremner Wafers are made by the Bremner Biscuit Company. The company claims that the crackers "have a neutral taste" and that they are "perfect for pairing with fine wine or savoring with cheese and pâté or seafood, soups and salads". It is because of this "neutral" taste that many wineries and food aficionados around the world prefer using the Bremner wafer as a wine tasting cracker. This neutral taste, however is seen as a drawback by some because it means the crackers are nearly tasteless when eaten alone.

A biscuit in the United States and parts of Canada, is a variety of small baked goods with a firm browned crust and a soft, crumbly interior. They are usually made with baking powder or baking soda as a chemical leavening agent rather than yeast. They developed from hardtack which was first made from only flour and water, with later first lard and then baking powder being added. Biscuits, soda breads, and cornbread, among others, are often referred to collectively as "quick breads", to indicate that they do not need time to rise before baking.