Danbury is a hamlet in Saskatchewan.

Indian Springs State Park is a 528-acre (2.14 km²) Georgia state park located near Jackson and Flovilla. The park is named for its several springs, which the Creek Indians used for centuries to heal the sick. The water from these springs is said to have a sulfur smell and taste. Indian Springs is thought to be the oldest state park in the nation. It was acquired from the Creek Indians by the state through the Treaty of Indian Springs (1825) and the Treaty of Washington (1826). Thereafter, Indian Springs has been operated continuously by the state as a public park, although it did not gain the title "State Park" until 1931. The area became a resort town in the 19th century. It became an official "State Forest Park" in 1927. In 1931, along with Vogel State Park, it became a founding unit of Georgia's state park system.

The Orleans Correctional Facility is a state prison in New York, United States. OCF is a medium security prison for males and is located in the Town of Albion, Orleans County in Western New York. 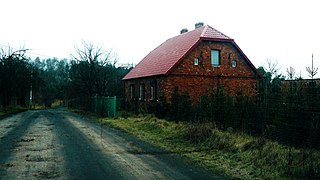 Łoskoń Stary, known also as Stary Łoskoń, is a village in the administrative district of Gmina Murowana Goślina, within Poznań County, Greater Poland Voivodeship, in west-central Poland. It lies approximately 11 kilometres (7 mi) north of Murowana Goślina and 31 km (19 mi) north of the regional capital Poznań. It is close to a small lake and expanses of forest.

Ostrowiec is a village in the administrative district of Gmina Kocierzew Południowy, within Łowicz County, Łódź Voivodeship, in central Poland.

Parma is a village in the administrative district of Gmina Łowicz, within Łowicz County, Łódź Voivodeship, in central Poland. It lies approximately 7 kilometres (4 mi) south-east of Łowicz and 48 km (30 mi) north-east of the regional capital Łódź.

Piaski is a village in the administrative district of Gmina Nieborów, within Łowicz County, Łódź Voivodeship, in central Poland. It lies approximately 13 kilometres (8 mi) south-east of Łowicz and 54 km (34 mi) north-east of the regional capital Łódź.

Budziszyn is a village in the administrative district of Gmina Chynów, within Grójec County, Masovian Voivodeship, in east-central Poland. It lies approximately 4 kilometres (2 mi) south-west of Chynów, 14 km (9 mi) east of Grójec, and 38 km (24 mi) south of Warsaw.

Ludwików is a village in the administrative district of Gmina Rybno, within Sochaczew County, Masovian Voivodeship, in east-central Poland. 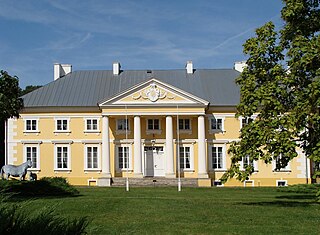 Racot is a village in the administrative district of Gmina Kościan, within Kościan County, Greater Poland Voivodeship, in west-central Poland. It lies approximately 6 kilometres (4 mi) south-east of Kościan and 41 km (25 mi) south of the regional capital Poznań.

Carquinez Strait Powerline Crossing was the world's first powerline crossing of a large river. It was built in 1901 for a 60 kV powerline operated by Bay Counties Power Company to deliver electric power from their Colgate powerhouse to Oakland, California. For this a crossing of Carquinez Strait was required, which has at its narrowest point at Dillon Point a width of 838 metres (0.52 mi). Such a span width was impossible with wooden poles, which were common in those days. Installing an underwater cable was considered, but for reliability reasons an overhead power line was installed, which used at the north site of the river a 68 metres (223.10 ft) tall lattice tower and at the south site one with a height of 20 metres (66 ft).

Mills Orchard is an unincorporated community in Glenn County, California. It lies at an elevation of 177 feet.

Sandy Beach, New York is a hamlet in the town of Grand Island in Erie County, New York, United States. It is located to the east of Buckhorn Island State Park.

Edmeston is a census-designated place (CDP) forming the central settlement of the town of Edmeston in Otsego County, New York, United States. The population of the CDP was 657 at the 2010 census.

Toboso is an unincorporated community in Licking County, in the U.S. state of Ohio.

Kiel is an unincorporated community in Franklin County, in the U.S. state of Missouri.

Cotton Creek is a stream in Oregon County in the Ozarks of southern Missouri. It is a tributary of Frederick Creek.