Springside is a town in Saskatchewan, Canada within Rural Municipality of Orkney No. 244. It is located about 24km northwest of the city of Yorkton along the Yellowhead Highway.

Springs of pure water along the old Dakota trail attracted settlers to make the present site of Springside, a main stopping place on their trek farther west. The CP railway line was laid parallel with this trail and the siding was named Patrick in honour of the Yorkton district pioneer doctor, T. A. Patrick. The first settlers in the vicinity of the village were from the British Isles or from Ontario, also of British extraction. To the north east of Springside, Ukrainians homesteaded and to the northwest, German-speaking peoples made homes on their claims. By 1903 the railway was under construction and a post office was being considered for the newly incorporated village however another community in the territory was already named Patrick so it was decided that the name should be changed. The presence of the springs beside the trail prompted the residents to petition the Post Master General to call the post office Springside. F. H. Willis was appointed post master that summer and received the first batch of mail on July 1, 1904. The Saskatchewan government declared Springside a village in 1909. During the Great Depression the Yellowhead Highway was built linking Springside to nearby Yorkton through the efforts of A. C. Stewart, Minister of Highways and Member for Yorkton. As a result, many businesses and services began to close down as people travelled to Yorkton to shop. [1] In 1985, Springside officially became a town.

Springside has one school that covers Kindergarten through grade 8 in the Good Spirit School Division. Enrollment for 2008 is 95 students.

Springside is close to Spiritwood Acres 18-hole golf course and Good Spirit Provincial Park as well a Theodore Dam. Springside has opportunities for swimming, boating, fishing for pike, perch and pickerel. as well as ice fishing, cross country ski trails, snowmobile trails, hunting for geese, ducks and deer. Nearby is an elk farm and to the south (approximately 32 km.) is a bison farm.

Originally located along the old Dakota Trail, Springside today is serviced by the Canadian Pacific Railway as well as Highway 47 and Highway 16 (Yellowhead Highway.) 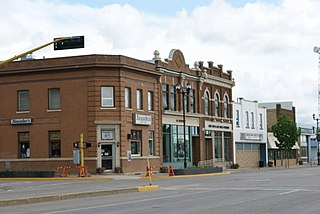 Melville is a small city in the east-central portion of Saskatchewan, Canada. The city is 145 kilometres (90 mi) northeast of the provincial capital of Regina and 45 kilometres (28 mi) southwest of Yorkton. Melville is bordered by the rural municipalities of Cana No. 214 and Stanley No. 215. Its population at the 2016 census was 4,562, making it Saskatchewan's smallest city. It is also home of hockey's Melville Millionaires, who compete in the Saskatchewan Junior Hockey League, and baseball's Melville Millionaires, who compete in the Western Canadian Baseball League.

Sturgis is a town of 620 people in east central Saskatchewan, Canada. The Town of Sturgis is 95 km north of Yorkton on Highway 9. It is located in the Assiniboine river valley near the lakes and woods region of the province.

Canora is a town, located at the junction of highways No. 5 and 9 in east central Saskatchewan, about 50 km north of Yorkton. It is centrally located on the corners of four adjacent rural municipalities, including the RM of Good Lake. The community is home to approximately 2,200 residents and is part of the Canora-Pelly electoral district. The community was founded along the Canadian Northern Railway tracks - one of the companies that evolved into the Canadian National Railway (CN), and two CN freight lines still run through Canora. The Canora railway station, downtown on the CN east-west line before the switch to the northbound line, is served by Via Rail on its passenger service from Winnipeg to Churchill, Manitoba.

Wynyard is a town in eastern Saskatchewan, Canada, 132 km west of Yorkton and 190 km east of Saskatoon. Wynyard is in but not part of the rural municipality of Big Quill No. 308. It is located on the Yellowhead Highway just south of Big Quill Lake. 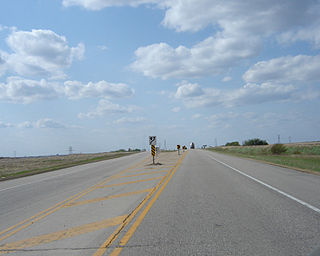 Highway 16 is a provincial highway in the Canadian province of Saskatchewan. It is the Saskatchewan section of the Yellowhead Highway, and also the Trans-Canada Highway Yellowhead section. The main purpose of this highway is to connect Saskatchewan with Canadian cities such as Edmonton and Winnipeg. The highway runs from the Alberta boundary in Lloydminster to the Manitoba boundary near Marchwell. Major cities it passes through are Saskatoon, North Battleford in the central part of the province, Yorkton in the far east and Lloydminster to the far west.

Wadena is a town in the Canadian province of Saskatchewan, located east of Saskatoon, north of Fort Qu'Appelle and north-west of Yorkton on the eastern shore of the Quill Lakes. The town is known for its birdwatching opportunities, and hosts the Shorebirds and Friends Festival every year. The Wadena and District Museum, located just south of Wadena on Highway 35, also hosts an annual Vintage Day in August. Its population in the 2011 Canada Census was 1,306.

Strongfield is a small village in the centre of the province of Saskatchewan, Canada. It lies about 100 km south of Saskatoon, Saskatchewan on Highway #19 between its sister communities of Hawarden and Loreburn.

Saltcoats is a small town in East Central Saskatchewan near the Manitoba border in Canada. The town's population was 474 in 2011. The town was built in the late 19th century, and its economy was driven by the railway. There is no longer passenger service to the town. 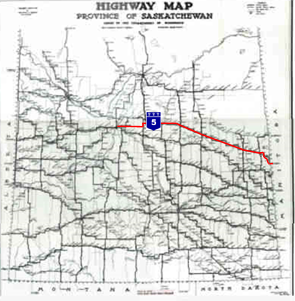 Highway 9 is a provincial paved undivided highway in the Canadian province of Saskatchewan. It runs from North Dakota Highway 8 at the US border near Port of Northgate until it transitions into Provincial Road 283 at the Manitoba provincial boundary.

The Saskota Flyway is known as the International Road to Adventure, because it takes you from Hudson Bay, Saskatchewan, all the way south to Bismarck, North Dakota.

Highway 47 is a highway in the Canadian province of Saskatchewan. It runs from North Dakota Highway 40 at the Canada–United States border until Highway 49 near Preeceville. Highway 47 is about 358 km (222 mi) long. Highway 47 is unpaved for 64 km (40 mi), from the Moose Mountain Creek crossing until the intersection with Highway 1.

Bredenbury is a town, in the rural municipality of Saltcoats, No. 213, in the Canadian province of Saskatchewan. Bredenbury is located on Highway 16 in eastern Saskatchewan. As of the 2016 Canadian Census, the population of Bredenbury was 372. The main industries in the area are farming as well as potash mining near Esterhazy. The community is known in the area for its enthusiastic Christmas light displays which have won national awards.

Clarke Breitkreuz is a Canadian-German professional ice hockey player. He is currently playing for German side Lausitzer Füchse in the second-tier DEL2. Clarke stands 6'1'' (185 cm) tall and plays forward.