David Fricke (born June 4, 1952)[ citation needed ] is an American music journalist who serves as the senior editor at Rolling Stone magazine, where he writes predominantly on rock music. One of the best known names in rock journalism, his career has spanned over 40 years. [1] In the 1990s, he was the magazine's music editor [2] before stepping down.

The first concert that Fricke attended was a Pink Floyd concert. It was his love for live music that set him on his career path of becoming a music journalist. [6]

Before joining Rolling Stone, where he is now senior editor, he wrote for Circus , Trouser Press , Synapse , and Good Times. [6] [1]

He has appeared on the Classic Albums documentaries on the making of Pink Floyd's The Dark Side of the Moon , Cream's Disraeli Gears , Def Leppard's Hysteria , Nirvana's Nevermind , Metallica's Black Album , Peter Gabriel's So , Frank Zappa's Apostrophe and Over-Nite Sensation as well as Rush's Moving Pictures and 2112 albums. Fricke has also appeared on a number of Lou Reed documentaries and in the Wilco documentary I Am Trying to Break Your Heart . [7]

He currently writes the "Fricke's Picks Radio" podcast and the Alternate Take blog in Rolling Stone, as well as serving as the Host of the Friday Night Affair on “Tom Petty Radio”. [10]

Fricke has written liner notes for a number of albums, compilations and box sets, including:

Nirvana was an American rock band formed in Aberdeen, Washington, in 1987. Founded by lead singer-songwriter and guitarist Kurt Cobain and bassist Krist Novoselic, the band went through a succession of drummers before recruiting Dave Grohl in 1990. Nirvana's success popularized alternative rock, and they were often referenced as the figurehead band of Generation X. Their music maintains a popular following and continues to influence modern rock and roll culture. 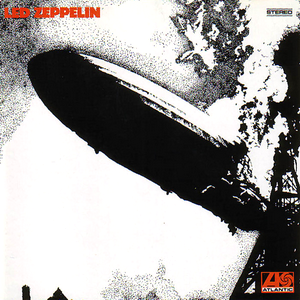 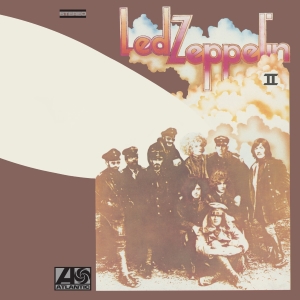 Led Zeppelin II is the second studio album by the English rock band Led Zeppelin, released on 22 October 1969 in the United States and on 31 October 1969 in the United Kingdom by Atlantic Records. Recording sessions for the album took place at several locations in both the United Kingdom and North America from January to August 1969. The album's production was credited to the band's lead guitarist and songwriter Jimmy Page, and it was also Led Zeppelin's first album on which Eddie Kramer served as engineer. 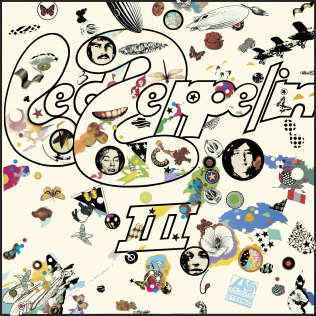 Led Zeppelin III is the third studio album by the English rock band Led Zeppelin, released in October 1970. It showed a progression from straightforward rock towards folk and acoustic music.

The untitled fourth studio album by the English rock band Led Zeppelin, commonly known as Led Zeppelin IV, was released on 8 November 1971 by Atlantic Records. It was produced by guitarist Jimmy Page and recorded between December 1970 and February 1971, mostly in the country house Headley Grange. The album is notable for featuring "Stairway to Heaven", which has been described as the band's signature song. 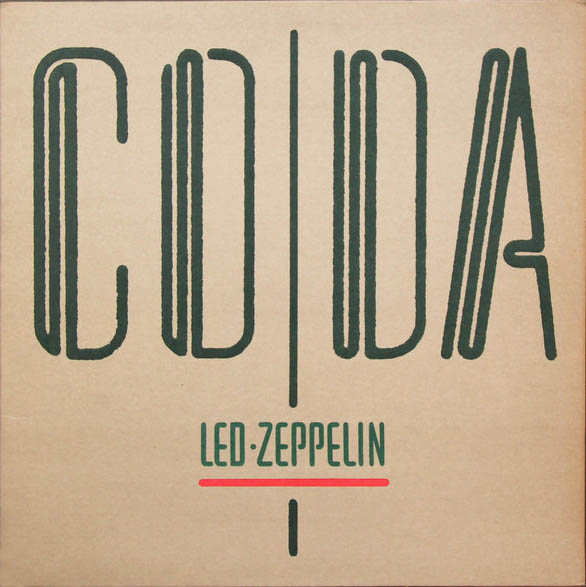 Coda is a rarities compilation album by the English rock band Led Zeppelin. The album is a collection of unused tracks from various sessions during Led Zeppelin's twelve-year career. It was released on 19 November 1982, two years after the group had officially disbanded following the death of drummer John Bonham. The word coda, meaning a passage that ends a musical piece following the main body, was therefore chosen as the title. 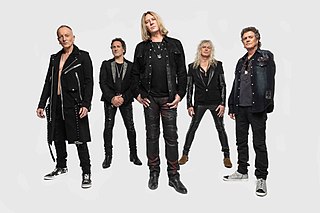 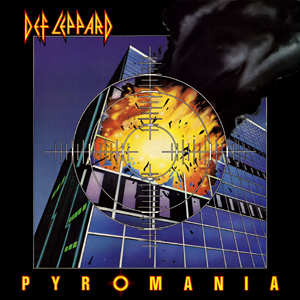 Pyromania is the third studio album by English rock band Def Leppard, released on 20 January 1983 through Vertigo Records in UK and Europe and through Mercury Records in the US. The first album to feature guitarist Phil Collen who replaced founding member Pete Willis, Pyromania was produced by Robert John "Mutt" Lange. The album was a shift away from the band's traditional heavy metal roots toward more radio-friendly glam metal and hard rock, finding massive mainstream success. Pyromania charted at No. 2 on the Billboard 200, No. 4 on the Canadian RPM Album chart and No. 18 on the UK Albums Chart. Selling over ten million copies in the US, it has been certified diamond by the RIAA. 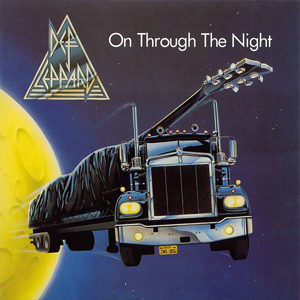 On Through the Night is the debut studio album by the English rock band Def Leppard, released on 14 March 1980. The album was produced by Tom Allom. It charted at No. 15 on the UK Albums Chart and No. 51 on the Billboard 200. The album features re-recorded versions of "Rocks Off" and "Overture", tracks from the band's original independently released EP, The Def Leppard E.P. Other tracks are re-recorded versions of early demos, some of which later appeared on the 2020 box set The Early Years 79–81. The album was certified gold by the RIAA on 18 November 1983 and platinum on 9 May 1989. 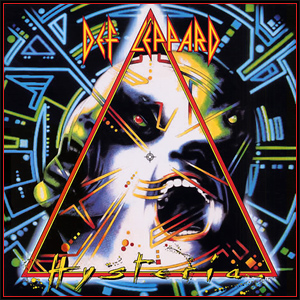 Hysteria is the fourth studio album by English rock band Def Leppard, released on 3 August 1987 through Mercury Records and reissued on 1 January 2000. It is Def Leppard's best-selling album to date, selling over 20 million copies worldwide, including 12 million in the US, and spawning seven hit singles. The album charted at number one on both the Billboard 200 and the UK Albums Chart.

"Dumb" is a song by the American rock band, Nirvana, written by vocalist and guitarist, Kurt Cobain. It is the sixth song on the band's third and final studio album, In Utero, released in 1993. 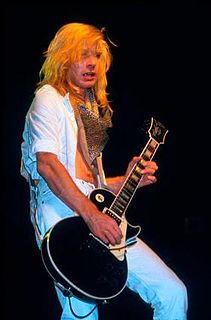 Stephen Maynard Clark was an English musician. He was the principal songwriter and lead guitarist for the English hard rock band Def Leppard, until 1991, when he died from alcohol poisoning. In 2007, Clark was ranked No. 11 on Classic Rock Magazine's "100 Wildest Guitar Heroes". In 2019, Clark was inducted into the Rock and Roll Hall of Fame as a member of Def Leppard. 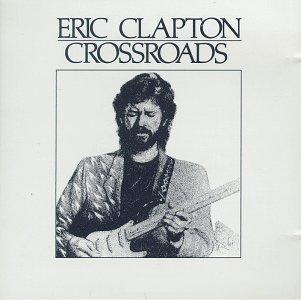 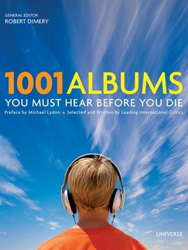 1001 Albums You Must Hear Before You Die is a musical reference book first published in 2005 by Universe Publishing. Part of the 1001 Before You Die series, it compiles writings and information on albums chosen by a panel of music critics to be the most important, influential, and best in popular music between the 1950s and the 2010s. The book is edited by Robert Dimery, an English writer and editor who had previously worked for magazines such as Time Out and Vogue.

Michael Putland was an English music photographer who "didn’t have a day off in the seventies. At least that’s how it seemed to him at the time". He photographed thousands of artists, from ABBA to Zappa. 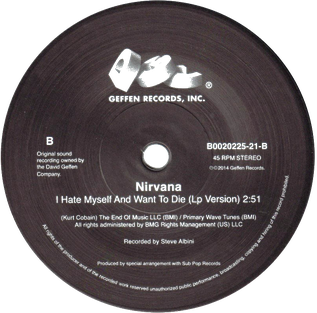 "I Hate Myself and Want to Die" is a song by the American grunge band Nirvana, written by vocalist and guitarist Kurt Cobain. It appears on the compilation album The Beavis and Butt-Head Experience, released in November 1993. 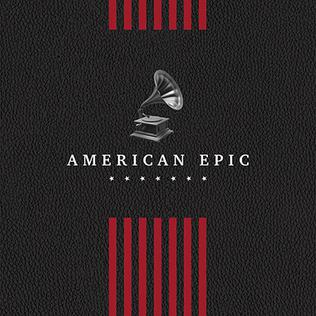 American Epic: The Collection is a 100-track, 5-CD box set of American roots music performances from the 1920s and 1930s. It was compiled by film director Bernard MacMahon to accompany the release of his American Epic documentary film series. The box features 100 songs by 100 different artists and has been acclaimed by many critics as a worthy successor to the Anthology of American Folk Music and one of the best box sets to ever be released. The box set won particular acclaim for the song selection and the sound quality of the transfers of vintage 78rpm records.