Dempseytown is an unincorporated community located in the Oakland Township, Venango County, Pennsylvania at the intersection of Pennsylvania Route 428 and 417. The town was named after its first settlers, the Dempsey family, who built their home in the 1800s. There are no stop lights in Dempseytown. Two Mile Run is a local attraction with camping and fishing. 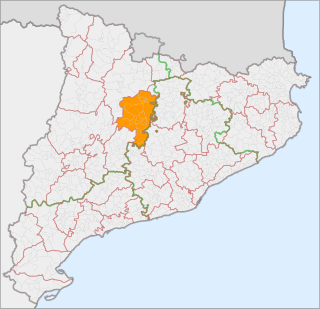 Solsonès is a comarca (county) in Catalonia, Spain. It is part of historic county of Urgell. Over 60% of its people live in the capital, Solsona.

Pittsburgh Field Club is a private country club, established in 1882, located six miles (10 km) northeast of downtown Pittsburgh in the suburb of Fox Chapel, Pennsylvania. It rounds out an impressive quartet of courses in the suburbs northeast of Pittsburgh, along with the Longue Vue Club, Oakmont Country Club and the Seth Raynor-designed Fox Chapel Golf Club. 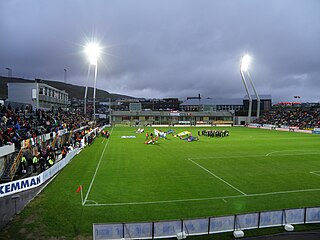 Tórsvøllur is a football stadium on the sport site of Gundadalur in Tórshavn, the capital of the Faroe Islands. The stadium holds 5000 people, and was built in 1999 to become the country's national stadium to provide an artificial grass surface on which international football matches could be played. Previously, the Faroe Islands national team played its home matches in the town of Toftir at Svangaskarð stadium.

Ronda is a former settlement in Yolo County, California. It was located on the Southern Pacific Railroad 9.5 miles (15 km) southeast of Dunnigan, at an elevation of 59 feet. It still appeared on maps as of 1915.

Vələsli is a village in the Ismailli Rayon of Azerbaijan.

Gədik is a former village in the Quba Rayon of Azerbaijan. The village formed part of the municipality of Gədikqışlaq.

Van Vleck is an unincorporated community in El Dorado County, California. It is located 4 miles (6.4 km) east-northeast of Pollock Pines, at an elevation of 3888 feet.

Baldwins Creek is a tributary of the Stony Brook in Mercer County, New Jersey in the United States.

The Oil Region is an unofficial region in the western part of the U.S. state of Pennsylvania that encompasses the land in and around the Oil Creek valley. It is so named because it includes the first oil fields discovered in the United States.

Paaste is a village in Saaremaa Parish, Saare County in western Estonia.

WTAY 1570 AM is a radio station broadcasting a sports talk format. Licensed to Robinson, Illinois, United States, the station is owned by The Original Company, Inc.

Paddock is an unincorporated community in Holt County, Nebraska, in the United States.

Vanilla is an unincorporated community in Franklin County, in the U.S. state of Pennsylvania.

Current View is an unincorporated community in Clay County, Arkansas and Ripley County, Missouri, United States. The community straddles the Missouri-Arkansas border on the northeast bank of the Current River. Arkansas Highway 211 connects to the south and Missouri Route E is to the north. Doniphan lies approximately eight miles to the north-northwest and Success, Arkansas is about nine miles south.

Portland Mills is an unincorporated community in Clinton Township, Putnam County, in the U.S. state of Indiana.

Wa-Will-Away Park is an unincorporated community in Plain Township, Kosciusko County, in the U.S. state of Indiana.

Rolling Ridge is a populated place in Addison Township, Shelby County, in the U.S. state of Indiana.