Cranberry is a township in Venango County, Pennsylvania, United States. The population was 7,014 at the 2000 census. 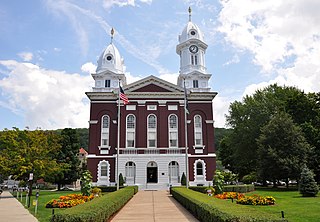 Venango County is a county located in the Commonwealth of Pennsylvania. As of the 2010 census, the population was 54,984. Its county seat is Franklin. The county was created in 1800 and later organized in 1805.

Cranberry Township is the name of some places in the U.S. state of Pennsylvania:

East Sandy Creek is a tributary of the Allegheny River in Northwestern Pennsylvania in the United States.

Area code 724 is a Commonwealth of Pennsylvania telephone area code in western and southwestern Pennsylvania, including most of the suburbs of Pittsburgh. It was split from area code 412 on February 1, 1998. 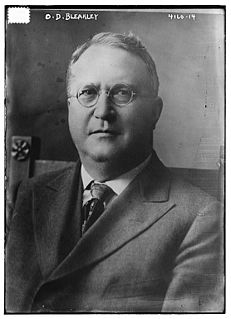 Orrin Dubbs Bleakley was a Republican member of the U.S. House of Representatives from Pennsylvania.

The 64th Pennsylvania House of Representatives District is in Northwestern Pennsylvania and has been represented by R. Lee James since 2013.

The cranberry is a group of evergreen dwarf shrubs, bearing the fruit named after such.

This is a list of the National Register of Historic Places listings in Venango County, Pennsylvania.

Judge Robert Lamberton was an associate Judge of the Courts of Venango County, Pennsylvania, who founded the first bank in the county later known as the Lamberton Savings Bank. The bank building was demolished in 1969 to make way for the First National Bank of Pennsylvania.

District 9 or District IX of the Pennsylvania Interscholastic Athletic Association (PIAA) is an interscholastic athletic association in the North Central Mountain Region of Pennsylvania. The district consists of the 6 counties of Cameron, Clarion, Elk, Jefferson, McKean and Potter. As of the 2014-15 and 2015-16 school years, District 9 will have 35 member high schools competing in various fall, winter and spring sports. 10 of the 35 schools are located outside of the district from Butler, Clearfield, Forest, Venango and Warren counties, but compete in District 9 sports competitions. The district is located in a very rural area of northern Pennsylvania, mostly made up of fields, forests, hills and mountains.

Venus is an unincorporated community in Clarion and Venango counties, Pennsylvania, United States. The community is located on Pennsylvania Route 157 12.7 miles (20.4 km) east-southeast of Oil City. Venus has a post office with ZIP code 16364.