With more than 12,000 m2 it is one of Denmark's largest theaters. It has two stages, the main auditorium which seats more than 1,000 and Sceneriet, a smaller theatre established in the cellar in 1994.

The site of the theatre, then a worn down apartment block, was in the spring of 1902 acquired by a development company, Bona, which had plans to build a large theatre and in the same time to open a passage between Gammel Kongevej and the new Vesterbro Passage, now part of Vesterbrogade, which was the backbone in a westward expansion of Copenhagen's city centre. [1] Bona engaged Viggo Lindstrøm in the project as artistic consultant, he had been resident actor and director at Folketeatret but resigned after a fashionable controversy with its director, and in 1906 the company applied the Ministry of Justice for a license for the theatre's operation. The application was initially rejected by Peter Adler Alberti, the minister of Justice, supposedly due to a link with Folketeatret's director, but after personal intervention from King Frederik, the license was finally granted. [2]

In March 1907, Bona commissioned the architect Lorenz Gudme to draw up a project. He had previously worked for Ove Petersen, who was responsible for both the Royal Theatre, in collaboration with Vilhelm Dahlerup, and the Dagmar Theatre. His proposal was accepted and the fundaments were laid on 14 August 1907. Shortly after construction start, a disagreement occurred between Bona and Gudme who was ultimately fired from the project which was instead completed by Ludvig Andersen. When the theatre was inaugurated on 19 September 1908 it was the second largest theatre in the country and the construction price had been approx. DKK 1,200,000 and DKK 600,000 for the site. [2]

Lindstrøm, who also was the theatre's first director, had declared himself willing to set up everything at his new theatre, the second largest in Copenhagen, but the opening performance, Pierre Berton's Den skønne Marseillanerinde, an extravaganza about Napoleon with a young cast featuring such later stars as Poul Reumert, Asta Nielsen and Clara Wieth, became exemplar of the repertoire during the first three decades. [1]

Lindstrøm himself left the theatre after just three years due to an insignificant debts. He was succeeded in the post by the actor Ivar Schmidt (1869–1940) who held the post from 1911 to 1937, accompanied by actors such as Else-Marie, Berthe Qvistgaard, Ellen Gottschalch, Ib Schønberg and Osvald Helmuth. [1]

The director from 1944 to 1966 was Peer Gregaard and he dramatically changed the repertoire from with a combination of classics and contemporary Danish and European drama. During this era, Det Ny Teater came to challenge the Royal Danish Theatre as the leading theatrical stage in Denmark. [1]

In the 1960s it became evident that it was difficult to operate theatres without subsidies. The writer Knud Poulsen was appointed director in 1969 and by 1971 the theatre faced closure but was saved when the county and Ministry of Culture stepped in and compensated for reduced ticket prices. [1]

This marked the beginning of a crisis for the theatre which reflected the general adversities for the industry and, in 1976, led to the introduction of a general regime for subsidizing theatrical productions. In 1991, when the theatre, by then in a poor state of neglect, lost its support, it had to close indefinitely. [1]

The owners succeeded in raising funds for a thorough renovation. Bent Mejding was the driving force behind the restoration of the theater, which he and Niels-Bo Valbro reopened as a venue for operetta and musicals with a production of Die Fledermaus in 1994. Since then the theatre has produced a number of large productions, the most successful of which, artistically and audience-wise, has been Phantom of the Opera , which ran from 2000 to 2002. [1]

The theatre building spans a passage between Vesterbrogade and Gammel Kongevej and has a facade front on both sides. The complex also includes the surrounding buildings.

The theatre is loosely modelled on the Paris Opera, but is built in a mixture of styles, combining elements such as classical trompe-l'œil effects and Greek capitals side by side with art deco features. [3]

Built in reinforced concrete, it was the first building in Denmark to use the Hennebique system, due to added strength, allowed the theatre to be the first in Denmark to have balconies without supporting pillars. [2] The theatre was also the first in Denmark to feature a revolving stage. [2] Other state-of-the-art features were an advanced sprinkler system in case of fire on stage, showers installed for the actors on every floor. For the audience there were comfortable family boxes, an elegant marble staircase and a large inviting foyer. [2] The renovation in 1994 received the Europa Nostra award from the European Union. [1]

Since the renovation, the theatre has two stages. The large auditorium seats app. 1,000 while the small one, built in the cellar in connection with the 1994 renovation, seats an audience of 250 to 300. The main repertoire is still musicals.

The theatre plays also host to a variety of other events and is available on hire. 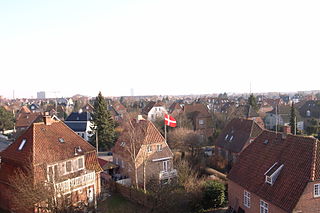 Bent Mejding is a Danish actor, stage director and theatre manager. He won a Danish Film Academy Award in 1985 and 2007. He is married to the actress Susse Wold. 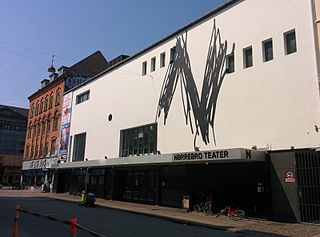 The Nørrebros Teater is a theater in Copenhagen, Denmark. Notable actors who have starred at the theatre before entering film include Osvald Helmuth, Buster Larsen, Poul Reichhardt and Poul Bundgaard. It is now operated as a part of the Københavns Teater in affiliation with the Betty Nansen Teatret, Folketeatret and Østre Gasværk Teater.

Vibeke Hastrup is a Danish actress who has worked in theatre, television and film. She performed in the films Babette's Feast and Dance of the Polar Bears, and has done numerous voice-overs for animated features such as Tarzan, Robots and Wallace & Gromit: The Curse of the Were-Rabbit.

The following lists events that happened during 1908 in Denmark.

Vesterbrogade is the main shopping street of the Vesterbro district of Copenhagen, Denmark. The 1.5 km long street runs from the City Hall Square in the east to Pile Allé in Frederiksberg in the west where it turns into Roskildevej. On its way, it passes Copenhagen Central Station as well as the small triangular square Vesterbros Torv. It is one of four such -bro streets, the other being Nørrebrogade, Østerbrogade and Amagerbrogade.

Waage Sandø is a Danish theatre, film and television actor. He is known to international audiences mainly for his appearances in the TV series Bedrag

Viggo Lindstrøm was a Danish actor and theatre director, founder of Det Ny Teater in Copenhagen. He was married to the actress Vera Lindstrøm.

Københavns Teater, often referred to as kbht,, is a self-owning organization under the Danish Ministry of Culture responsible for sponsoring and managing a number of theatres in the Greater Copenhagen area. The theaters within the organization are managed by a board that decides which venues should be offered. The members of the Board of Directors are appointed from among persons affiliated with the acting industry.

Frederiksberg Allé is a tree-lined avenue which runs through the southernmost part of the Frederiksberg district of Copenhagen, Denmark. It connects Vesterbrogade at Værnedamsvej to Frederiksberg Runddel in front of the main entrance to Frederiksberg Gardens. It was originally constructed in 1704 as the king's private road leading to his new summer residence, Frederiksberg Palace. It developed into the backbone of an entertainment district in the mid 18th century, and has continued to be associated with theatres until the present day. The avenue is lined with two double rows of linden trees and bisects Sankt Thomas Plads, a small round plaza, shortly after its departure from Vesterbrogade.

National Scala was an entertainment venue opposite Tivoli Gardens on Vesterbrogade in Copenhagen, Denmark. The building was later converted into a shopping centre and demolished in 2013.

Hans Egede Budtz was a Danish stage and film actor.

Harald Conrad Stilling was a Danish architect who was active in Copenhagen during the Late Classical period of the mid-18th century. He received the C. F. Hansen Medal in 1841.

Rogert Møller was a Danish architect and credit union manager. He was as an architect mainly active in the Vesterbro district of Copenhagen, designing many residential buildings during the population boom of the late 19th century. He worked for Østifternes Kreditforening from 1876 and served as chief technical officer from 1904.

Ingeborg Cathrine Caroline Skov (1893–1990) was a Danish actress who performed on stage as well as in a number of films. After training at Copenhagen's Dagmar Theatre, she made her stage debut there in 1911 while her first movie appearance was in 1914 in the silent film Elskovsbarnet. After marrying the theatre director Carl Thorvald Larsen in 1930, she performed a wide variety of key roles, first at the Odense Theatre until 1935 and thereafter at Copenhagen's Folketeatret until 1959. After her husband retired, she ran the Alexandra Cinema in Copenhagen. 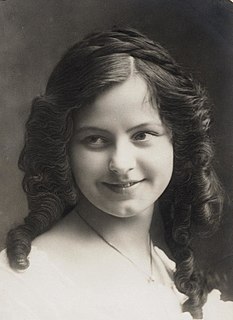 Ellen Aggerholm née Abrahams (1882–1963) was a Danish stage and screen actress. She made her debut in Attester at Copenhagen's Folketeatret in 1901. In 1911, she moved to London where she first played Puck in Shakespeare's A Midsummer Night's Dream at Her Majesty's Theatre. She returned to Denmark when war broke out in 1914, touring with her husband's company until 1917. She then joined the Odense Theatre where she became the principal actress until 1924. She went on to tour the provinces until she performed in repertoire at the Casino Theatre in Copenhagen. After a long career, she retired from the stage in 1947. While young, Aggerholm performed a number of leading roles in mainly short silent films released by Nordisk Film from 1910 to 1915.