The East London Waterworks Company was one of eight private water companies in London absorbed by the Metropolitan Water Board in 1904.

The company was founded by Act of Parliament in 1806, and in 1845 the limits of supply were described as "all those portions of the Metropolis, and its suburbs, which lie to the east of the city, Shoreditch, the Kingsland Road, and Dalston; extending their mains even across the river Lea into Essex, as far as West Ham." [1]

The water supplied by the company was taken from the Lea, with waterworks on 30 acres (0.12 km2) of land at Old Ford. The company also acquired existing waterworks at Shadwell (dating from 1660) Lea Bridge (pre 1767) and West Ham (1743). Although the legislation that established the London water companies intended that they would compete for customers, in 1815 the East London company drew up a legal agreement with the New River Company defining a boundary between their areas of supply.

In 1829, the source of water was moved further up river to Lea Bridge as a result of pollution caused by population growth. In 1770, the Hackney Cut, had been built across Hackney Marshes to avoid a 2 miles (3.2 km) meander of the natural river course; clean water was now abstracted from the natural channel to a new reservoir at Old Ford. [2] In 1830 the company gained a lease on the existing reservoir at Clapton. This was replaced by a new reservoir at Stamford Hill in 1891. [3]

In 1866, during a cholera pandemic outbreak, where 5,973 Londoners perished, the East London Water Company was found guilty of supplying contaminated water taken from River Lea and stored into open reservoirs. Dead eels were found in water pipes, and foul water taken from the reservoirs and pumped into the main supply. [5]

The Metropolis Water Act 1902 amalgamated the eight private water companies into the Metropolitan Water Board, whose members were chosen by the various local authorities of the metropolitan area. 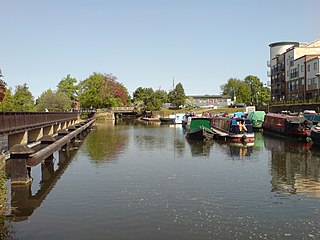 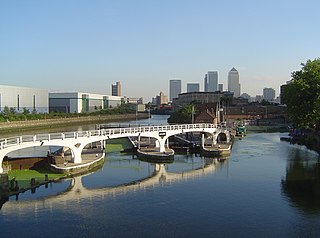 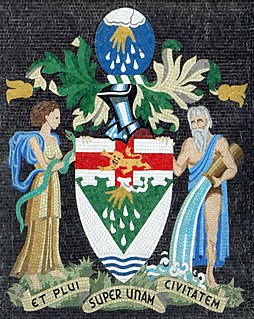 The Metropolitan Water Board was a municipal body formed in 1903 to manage the water supply in London, UK. The members of the board were nominated by the local authorities within its area of supply. In 1904 it took over the water supply functions from the eight private water companies which had previously supplied water to residents of London. The board oversaw a significant expansion of London's water supply infrastructure, building several new reservoirs and water treatment works.

The Hackney Brook is one of the subterranean rivers of London. It crossed the northern parts of the current London boroughs of Hackney and Islington, emptying into the River Lea at Old Ford, with its source in Holloway.

The Lea Valley, the valley of the River Lea, has been used as a transport corridor, a source of sand and gravel, an industrial area, a water supply for London, and a recreational area. The London 2012 Summer Olympics were based in Stratford, in the Lower Lea Valley. It is important for London's water supply, as the source of the water transported by the New River aqueduct, but also as the location for the Lee Valley Reservoir Chain, stretching from Enfield through Tottenham and Walthamstow.

London's water supply infrastructure has developed over the centuries in line with the expansion of London. For much of London's history, private companies supplied fresh water to various parts of London from wells, the River Thames and the River Lea. Further demand prompted new conduits and sources, particularly when the Agricultural and Industrial Revolution caused a boom in London's population and housing.

The Chelsea Waterworks Company was a London waterworks company founded in 1723 which supplied water to many central London locations throughout the 18th and 19th centuries until its functions were taken over by the Metropolitan Water Board in 1904. 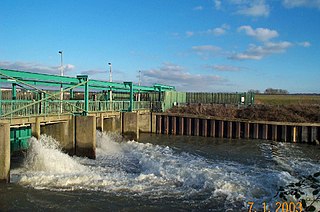 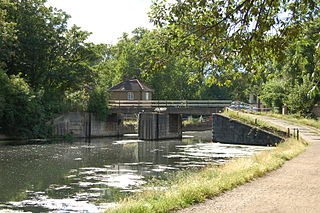 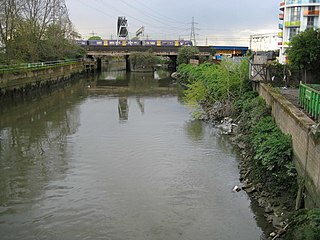 Waterworks River is a river, at one time a tidal river, in the London Borough of Newham, one of the Bow Back Rivers that flow into the Bow Creek part of the River Lea, which in turn flows into the River Thames.

The Grand Junction Waterworks Company was a utility company supplying water to parts of west London in England. The company was formed as an offshoot of the Grand Junction Canal Company in 1811 and became part of the publicly owned Metropolitan Water Board in 1904.

The Lambeth Waterworks Company was a utility company supplying water to parts of south London in England. The company was established in 1785 with works in north Lambeth and became part of the publicly owned Metropolitan Water Board in 1904.

Thomas Wicksteed was a notable English civil engineer of the 19th century. As engineer to the East London Waterworks Company he was responsible for introducing the Cornish pumping engine. He oversaw many improvements, and was approached for advice by a number of water companies elsewhere in the country, later turning his attention to the efficient handling of sewage.

Walthamstow Wetlands is a 211-hectare nature reserve in Walthamstow, east London, adjacent to the historic Essex-Middlesex border on the River Lea. It is focused on the Walthamstow Reservoirs, built by the East London Waterworks Company between 1853 and 1904 as part of the Lee Valley Reservoir Chain. The site is one of the largest urban wetland nature reserves in Europe and is particularly important for wildlife due to its position within the Lee Valley. It serves as a byway for migrating, wintering and breeding birds. Visitors can freely access the site's natural, industrial and social heritage in one of the capital's most densely populated urban areas.