The Estonian Cup (Estonian : Eesti karikas), also known as the Paf SuperCup for sponsorship reasons, is an annual cup competition for Estonian basketball teams. It is organized by the Estonian Basketball Association.

Tallinn is the capital and most populous city of Estonia. Located in the northern part of the country, on the shore of the Gulf of Finland of the Baltic Sea, it has a population of 437,619 in 2020. Administratively a part of Harju County, Tallinn is the main financial, industrial and cultural centre of Estonia; the second largest city, Tartu, is located in the southern part of Estonia, 187.2 kilometres (116.3 mi) southeast of Tallinn. Tallinn is located 80.32 kilometres (49.91 mi) south of Helsinki, Finland, 320.56 kilometres (199.19 mi) west of Saint Petersburg, Russia, 300.84 kilometres (186.93 mi) north of Riga, Latvia, and 380 kilometres (240 mi) east of Stockholm, Sweden. It has close historical ties with these four cities. From the 13th century until the first half of the 20th century Tallinn was known in most of the world by its historical German name Reval.

Valga County, or Valgamaa is a first-level administrative unit and one of 15 counties of Estonia. It comprises the former area of Valga District. The present-day county was created on 1 January 1990. The capital and largest town of Valga County is Valga, followed by Tõrva and Otepää. It is situated in the southern part of the country and borders Põlva and Võru County to the east, Latvia to the south and west, and Viljandi and Tartu County to the north. 29,944 people live in Valga County. 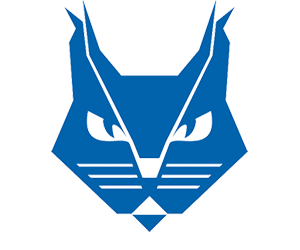 BC Kalev, known as BC Kalev/Cramo for sponsorship reasons, is a professional basketball club based in Tallinn, Estonia. The team plays in the Korvpalli Meistriliiga, the Estonian-Latvian Basketball League and the VTB United League. They play their home games at the Kalev Sports Hall and the Saku Suurhall. 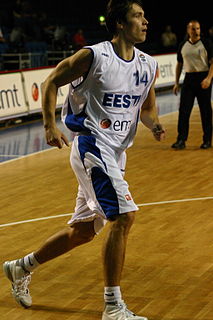 Kristjan Kangur is an Estonian professional basketball player for Pärnu Sadam of the Latvian-Estonian Basketball League. He is 2.03 m tall, and he can play at both the small forward and power forward positions.

Tanel Sokk is an Estonian professional basketball player who plays for TalTech Basketball Team of the Latvian–Estonian Basketball League. Standing at 1.88 m, he plays at the point guard position. He also represents the Estonian national basketball team internationally.

Sten-Timmu Sokk is an Estonian professional basketball player for Kalev/Cramo of the Latvian–Estonian League. He is a 1.84 m tall point guard. He represents the Estonian national basketball team internationally.

Tanel Kurbas is an Estonian professional basketball player who plays for Kalev/Cramo of the Korvpalli Meistriliiga. Standing at 1.97 m, he plays at the shooting guard and small forward positions. He also represents the Estonian national basketball team internationally.

Sport plays an important role in Estonian culture. Estonia first competed as a nation at the 1920 Summer Olympics, although the National Olympic Committee was established in 1923. Estonian athletes took part at every Olympic Games until the country was annexed by the Soviet Union in 1940. The 1980 Summer Olympics sailing regatta was held in the capital city Tallinn. Estonia has won most of its Olympic medals in wrestling, athletics, weightlifting, and cross-country skiing.

Estonia, officially the Republic of Estonia, is a country in Northern Europe. It is bordered to the north by the Gulf of Finland across from Finland, to the west by the Baltic Sea across from Sweden, to the south by Latvia, and to the east by Lake Peipus and Russia. The territory of Estonia consists of the mainland and of 2,222 islands on eastern coast of the Baltic Sea, covering a total area of 45,227 km2 (17,462 sq mi), and is influenced by a humid continental climate. Tallinn, the capital of Estonia, and Tartu are the largest cities and urban areas in the country. Other notable cities include Narva, Pärnu, Kohtla-Järve and Viljandi. The official language of the country, Estonian, is the second-most-spoken Finnic language.

The rosters of the top basketball teams in each season's European-wide professional club competitions :

BC Rakvere Tarvas is a professional basketball club based in Rakvere, Estonia. The team plays in the Latvian–Estonian Basketball League. Their home arena is the Rakvere Sports Hall.

Estonia participated in the Eurovision Song Contest 2016 with the song "Play" written by Fred Krieger, Stig Rästa and Vallo Kikas. The song was performed by Jüri Pootsmann. The Estonian broadcaster Eesti Rahvusringhääling (ERR) organised the national final Eesti Laul 2016 in order to select the Estonian entry for the 2016 contest in Stockholm, Sweden. The national final consisted of three shows: two semi-finals and a final. Ten songs competed in each semi-final and the top five from each semi-final as determined by a jury panel and public vote qualified to the final. In the final, the winner was selected over two rounds of voting. In the first round, a jury panel and a public vote selected the top three to qualify to the super final. In the super final, "Play" performed by Jüri Pootsmann was selected as the winner entirely by a public vote.