The semicolon or semi-colon; is a symbol commonly used as orthographic punctuation. In the English language, a semicolon is most commonly used to link two independent clauses that are closely related in thought. When a semicolon joins two or more ideas in one sentence, those ideas are then given equal rank. Semicolons can also be used in place of commas to separate the items in a list, particularly when the elements of that list contain commas. 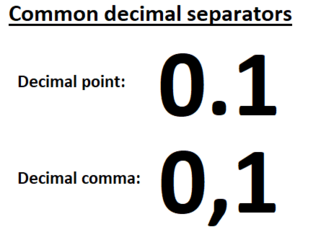 A decimal separator is a symbol used to separate the integer part from the fractional part of a number written in decimal form. Different countries officially designate different symbols for use as the separator. The choice of symbol also affects the choice of symbol for the thousands separator used in digit grouping.

In English language punctuation, a serial comma, or series comma, is a comma placed immediately after the penultimate term in a series of three or more terms. For example, a list of three countries might be punctuated either as "France, Italy and Spain" or "France, Italy, and Spain".

In written English usage, a comma splice or comma fault is the use of a comma to join two independent clauses. For example:

It is nearly half past five, we cannot reach town before dark.

A comma-separated values (CSV) file is a delimited text file that uses a comma to separate values. Each line of the file is a data record. Each record consists of one or more fields, separated by commas. The use of the comma as a field separator is the source of the name for this file format. A CSV file typically stores tabular data in plain text, in which case each line will have the same number of fields.

Polygonia c-album, the comma, is a food generalist (polyphagous) butterfly species belonging to the family Nymphalidae. The angular notches on the edges of the forewings are characteristic of the genus Polygonia, which is why species in the genus are commonly referred to as anglewing butterflies. Comma butterflies can be identified by their prominent orange and dark brown/black dorsal wings.

The Tephritidae are one of two fly families referred to as fruit flies, the other family being the Drosophilidae. The family Tephritidae does not include the biological model organisms of the genus Drosophila, which is often called the "common fruit fly". Nearly 5,000 described species of tephritid fruit fly are categorized in almost 500 genera of the Tephritidae. Description, recategorization, and genetic analyses are constantly changing the taxonomy of this family. To distinguish them from the Drosophilidae, the Tephritidae are sometimes called peacock flies, in reference to their elaborate and colorful markings. The name comes from the Greek τεφρος, tephros, meaning "ash grey". They are found in all the biogeographic realms.

A tab-separated values (TSV) file is a simple text format for storing data in a tabular structure, e.g., database table or spreadsheet data, and a way of exchanging information between databases. Each record in the table is one line of the text file. Each field value of a record is separated from the next by a tab character. The TSV format is thus a type of the more general delimiter-separated values format. 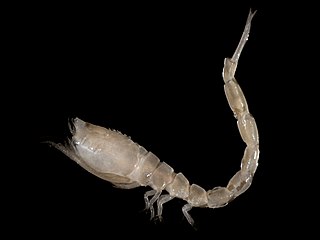 Cumacea is an order of small marine crustaceans of the superorder Peracarida, occasionally called hooded shrimp or comma shrimp. Their unique appearance and uniform body plan makes them easy to distinguish from other crustaceans. They live in soft-bottoms such as mud and sand, mostly in the marine environment. There are more than 1,500 species of cumaceans formally described. The species diversity of Cumacea increases with depth.

George Francis Hotz, alias geohot, is an American security hacker, entrepreneur, hip hop artist, and software engineer. He is known for developing iOS jailbreaks, reverse engineering the PlayStation 3, and for the subsequent lawsuit brought against him by Sony. Since September 2015, he has been working on his vehicle automation machine learning company comma.ai.

In molecular biology mir-11 microRNA is a short RNA molecule. MicroRNAs function to regulate the expression levels of other genes by several mechanisms. There is evidence to suggest that miR-11 plays a role in apoptosis.

Eurosta is a genus of gall maker flies in the family Tephritidae. There are seven species in the genus, all in North America. 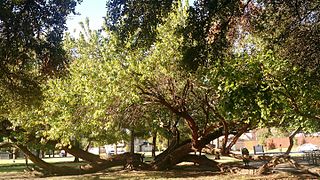 Lakewood Heights is a residential neighborhood in Dallas, Texas (USA), bounded by Abrams Road to the east, Monticello Avenue to the north, Skillman Street to the west, and Richmond Avenue to the south. It located in East Dallas. Lakewood Heights is approximately one-half mile (0.8 km) wide (east-west) and three-quarters of a mile (1.2 km) long (north-south). It covers approximately 240 acres or slightly less than 0.375 square miles (1000m²). It is adjacent to several East Dallas neighborhoods, including Lakewood, Lower Greenville, and Wilshire Heights.

CommaVid was a game developer and publisher for the Atari 2600 that released six games between 1981 and 1983, plus a programming tool for the console. The company was founded by Dr. Irwin Gaines, Dr. John Bronstein, and Dr. Joseph Biel under the name Computer Magic Video, which was shortened to Com Ma Vid, or CommaVid. It was based in Aurora, Illinois.

The goldenrod gall fly, also known as the goldenrod ball gallmaker, is a species of fly native to North America. The species is best known for the characteristic galls it forms on several species in the Solidago, or goldenrod, genus. The fly's eggs are inserted near the developing buds of the plant. After hatching, the larvae migrate to an area below the plant's developing buds, where they then induce the plant's tissues to form into the hardened, bulbous chamber referred to as a gall. E. solidaginis’s interactions with its host plant(s) and insect, as well as avian, predators have made it the centerpiece of much ecological and evolutionary biology research, and its tolerance of freezing temperatures has inspired studies into the anti-freeze properties of its biochemistry.

Eurosta cribrata is a species of fruit fly in the family Tephritidae.

openpilot is an open source, semi-automated driving system developed by comma.ai. openpilot operates as a replacement for OEM Advanced driver-assistance systems with the objective of improving visual perception and electromechanical actuator control. It allows users to modify their existing car with increased computing power, enhanced sensors, and continuously-updated driver assistance features that improve with user-submitted data.