Euthyneura is a taxonomic infraclass of snails and slugs, which includes species exclusively from marine, aquatic and terrestrial gastropod mollusks in the clade Heterobranchia.

Euthyneura are considered the crown group of Gastropoda, and are characterised by several autapomorphies, but are named for euthyneury. They are considered to be the most successful and diverse group of Gastropoda. Within this taxon, the Gastropoda have reached their peak in species richness and ecological diversity. This obvious evolutionary success can probably be attributed to several factors. Marine Opisthobranchia, e.g., have evolved several clades specialised on less used food resources such as sponges or cnidarians. A key innovation in the evolution of Pulmonata was the colonization of freshwater and terrestrial habitats. [3]

Various phylogenetic studies focused on Euthyneura: Dayrat et al. (2001), [4] Dayrat & Tillier (2002) [5] and Grande et al. (2004). [6] Morphological analyses by Dayrat and Tillier (2002) [5] demonstrated the need to explore new datasets in order to critically analyse the phylogeny of this controversial group of gastropods. Klussmann-Kolb et al. (2008) traced an evolutionary scenario regarding colonisation of different habitats based on phylogenetic hypothesis and they showed that traditional classification of Euthyneura needs to be reconsidered. [3]

Jörger et al. (2010) [7] have redefined major groups within the Heterobranchia and a cladogram showing phylogenic relations of Euthyneura is as follows: [7] 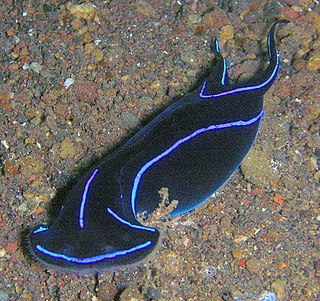 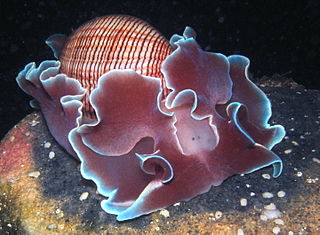 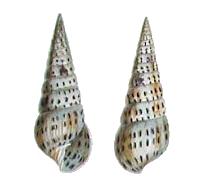 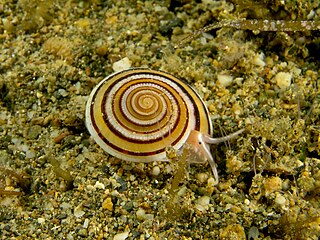 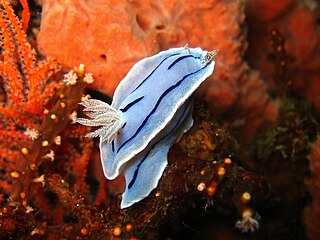 Nudipleura are a clade of sea snails and sea slugs, marine gastropod mollusks within the large clade Heterobranchia. 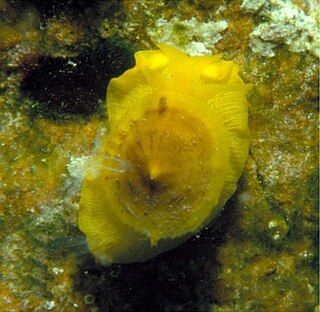 Runcinoidea is a taxonomic superfamily or a clade Runcinaecea of sea slugs, marine gastropod mollusks in the order Runcinida

The Glacidorbidae is a taxonomic family of freshwater snails.

†Heteroneritidae is an extinct taxonomic family of sea snails, marine gastropod mollusks in the superfamilia Pyramidelloidea.

Aiteng is a genus of two species of sea slugs, marine gastropod molluscs and one terrestrial species. Aiteng is the only genus in the family Aitengidae. The generic name Aiteng is derived from the name of a black puppet Ai Theng, which is one of the shadow play puppets in southern Thailand.

Panpulmonata is a taxonomic clade of snails and slugs in the clade Heterobranchia within the clade Euthyneura.

Architectibranchia is a clade of marine snails, gastropod molluscs.

Aiteng mysticus is a species of sea slug in the family Aitengidae, found around Hisamatsu, Miyako-jima, Okinawa, Japan. Morphologically it clearly belongs to the Aitengidae, but it shows differences to Aiteng ater at genus or species level. Its affinity to Aiteng ater is confirmed by comparison of the mitochondrial 16S rRNA sequences.

This article incorporates CC-BY-2.0 text from the reference [3]