Last updated June 26, 2021
Substance which continuously deforms under an applied shear stress, including liquids and gases
This article is about the concept in physics. For other uses, see Fluid (disambiguation).
Not to be confused with liquid.

In physics, a fluid is a liquid, gas, or other material that continually deforms (flows) under an applied shear stress, or external force. [1] They have zero shear modulus, or, in simpler terms, are substances which cannot resist any shear force applied to them.

Although the term fluid generally includes both the liquid and gas phases, its definition varies among branches of science. Definitions of solid vary as well, and depending on field, some substances can be both fluid and solid. [2] Viscoelastic fluids like Silly Putty appear to behave similar to a solid when a sudden force is applied. [3] Also substances with a very high viscosity such as pitch appear to behave like a solid (see pitch drop experiment). In particle physics, the concept is extended to include fluidic matters other than liquids or gases. [4] A fluid in medicine or biology refers any liquid constituent of the body (body fluid), [5] [6] whereas "liquid" is not used in this sense. Sometimes liquids given for fluid replacement, either by drinking or by injection, are also called fluids [7] (e.g. "drink plenty of fluids"). In hydraulics, fluid is a term which refers to liquids with certain properties, and is broader than (hydraulic) oils. [8]

Fluids display properties such as:

These properties are typically a function of their inability to support a shear stress in static equilibrium. In contrast, solids respond to shear either with a spring-like restoring force, which means that deformations are reversible, or they require a certain initial stress before they deform (see plasticity).

Solids respond with restoring forces to both shear stresses and to normal stresses—both compressive and tensile. In contrast, ideal fluids only respond with restoring forces to normal stresses, called pressure: fluids can be subjected to both compressive stress, corresponding to positive pressure, and to tensile stress, corresponding to negative pressure. Both solids and liquids also have tensile strengths, which when exceeded in solids makes irreversible deformation and fracture, and in liquids causes the onset of cavitation.

Both solids and liquids have free surfaces, which cost some amount of free energy to form. In the case of solids, the amount of free energy to form a given unit of surface area is called surface energy, whereas for liquids the same quantity is called surface tension. The ability of liquids to flow results in different behaviour in response to surface tension than in solids, although in equilibrium both will try to minimise their surface energy: liquids tend to form rounded droplets, whereas pure solids tend to form crystals. Gases do not have free surfaces, and freely diffuse.

The behavior of fluids can be described by the Navier–Stokes equations—a set of partial differential equations which are based on:

The study of fluids is fluid mechanics, which is subdivided into fluid dynamics and fluid statics depending on whether the fluid is in motion.

Depending on the relationship between shear stress and the rate of strain and its derivatives, fluids can be characterized as one of the following:

Newtonian fluids follow Newton's law of viscosity and may be called viscous fluids.

Fluids may be classified by their compressibility:

Newtonian and incompressible fluids do not actually exist, but are assumed to be for theoretical settlement. Virtual fluids that completely ignore the effects of viscosity and compressibility are called perfect fluids.

In physics and engineering, fluid dynamics is a subdiscipline of fluid mechanics that describes the flow of fluids—liquids and gases. It has several subdisciplines, including aerodynamics and hydrodynamics. Fluid dynamics has a wide range of applications, including calculating forces and moments on aircraft, determining the mass flow rate of petroleum through pipelines, predicting weather patterns, understanding nebulae in interstellar space and modelling fission weapon detonation.

Rheology is the study of the flow of matter, primarily in a liquid or gas state, but also as "soft solids" or solids under conditions in which they respond with plastic flow rather than deforming elastically in response to an applied force. Rheology is a branch of physics, and it is the science that deals with the deformation and flow of materials, both solids and liquids. 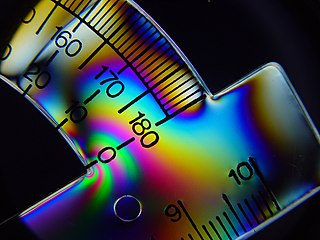 In continuum mechanics, stress is a physical quantity that expresses the internal forces that neighbouring particles of a continuous material exert on each other, while strain is the measure of the deformation of the material. For example, when a solid vertical bar is supporting an overhead weight, each particle in the bar pushes on the particles immediately below it. When a liquid is in a closed container under pressure, each particle gets pushed against by all the surrounding particles. The container walls and the pressure-inducing surface push against them in (Newtonian) reaction. These macroscopic forces are actually the net result of a very large number of intermolecular forces and collisions between the particles in those molecules. Stress is frequently represented by a lowercase Greek letter sigma (σ).

In materials science and continuum mechanics, viscoelasticity is the property of materials that exhibit both viscous and elastic characteristics when undergoing deformation. Viscous materials, like water, resist shear flow and strain linearly with time when a stress is applied. Elastic materials strain when stretched and immediately return to their original state once the stress is removed.

Thixotropy is a time-dependent shear thinning property. Certain gels or fluids that are thick or viscous under static conditions will flow over time when shaken, agitated, shear-stressed, or otherwise stressed. They then take a fixed time to return to a more viscous state. Some non-Newtonian pseudoplastic fluids show a time-dependent change in viscosity; the longer the fluid undergoes shear stress, the lower its viscosity. A thixotropic fluid is a fluid which takes a finite time to attain equilibrium viscosity when introduced to a steep change in shear rate. Some thixotropic fluids return to a gel state almost instantly, such as ketchup, and are called pseudoplastic fluids. Others such as yogurt take much longer and can become nearly solid. Many gels and colloids are thixotropic materials, exhibiting a stable form at rest but becoming fluid when agitated. Thixotropy arises because particles or structured solutes require time to organize. An overview of thixotropy has been provided by Mewis and Wagner. 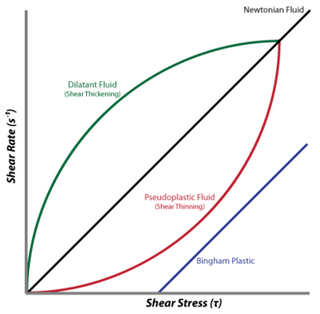 A dilatant material is one in which viscosity increases with the rate of shear strain. Such a shear thickening fluid, also known by the initialism STF, is an example of a non-Newtonian fluid. This behaviour is usually not observed in pure materials, but can occur in suspensions. 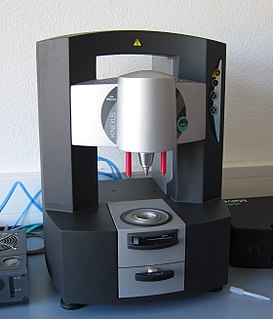 A rheometer is a laboratory device used to measure the way in which a liquid, suspension or slurry flows in response to applied forces. It is used for those fluids which cannot be defined by a single value of viscosity and therefore require more parameters to be set and measured than is the case for a viscometer. It measures the rheology of the fluid.

Fluid mechanics is the branch of physics concerned with the mechanics of fluids and the forces on them. It has applications in a wide range of disciplines, including mechanical, civil, chemical and biomedical engineering, geophysics, oceanography, meteorology, astrophysics, and biology.

In fluid mechanics, a shell balance can be used to determine how fluid velocity changes across a flow.

Volume viscosity is a material property relevant for characterizing fluid flow. Common symbols are or . It has dimensions, and the corresponding SI unit is the pascal-second (Pa·s).

The viscosity of a fluid is a measure of its resistance to deformation at a given rate. For liquids, it corresponds to the informal concept of "thickness": for example, syrup has a higher viscosity than water. 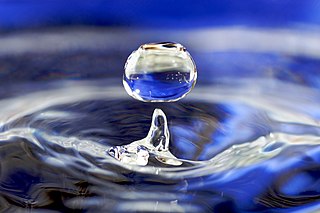 A liquid is a nearly incompressible fluid that conforms to the shape of its container but retains a (nearly) constant volume independent of pressure. As such, it is one of the four fundamental states of matter, and is the only state with a definite volume but no fixed shape. A liquid is made up of tiny vibrating particles of matter, such as atoms, held together by intermolecular bonds. Like a gas, a liquid is able to flow and take the shape of a container. Most liquids resist compression, although others can be compressed. Unlike a gas, a liquid does not disperse to fill every space of a container, and maintains a fairly constant density. A distinctive property of the liquid state is surface tension, leading to wetting phenomena. Water is, by far, the most common liquid on Earth.

Rheological Weldability (RW) of thermoplastics considers the materials flow characteristics in determining the weldability of the given material. The process of welding thermal plastics requires three general steps, first is surface preparation. The second step is the application of heat and pressure to create intimate contact between the components being joined and initiate inter-molecular diffusion across the joint and the third step is cooling. RW can be used to determine the effectiveness of the second step of the process for given materials.

Biofluid dynamics may be considered as the discipline of biological engineering or biomedical engineering in which the fundamental principles of fluid dynamics are used to explain the mechanisms of biological flows and their interrelationships with physiological processes, in health and in diseases/disorder. It can be considered as the conjuncture of mechanical engineering and biological engineering. It spans from cells to organs, covering diverse aspects of the functionality of systemic physiology, including cardiovascular, respiratory, reproductive, urinary, musculoskeletal and neurological systems etc. Biofluid dynamics and its simulations in computational fluid dynamics (CFD) apply to both internal as well as external flows. Internal flows such as cardiovascular blood flow and respiratory airflow, and external flows such as flying and aquatic locomotion. Biological fluid Dynamics involves the study of the motion of biological fluids. It can be either circulatory system or respiratory systems. Understanding the circulatory system is one of the major areas of research. The respiratory system is very closely linked to the circulatory system and is very complex to study and understand. The study of Biofluid Dynamics is also directed towards finding solutions to some of the human body related diseases and disorders. The usefulness of the subject can also be understood by seeing the use of Biofluid Dynamics in the areas of physiology in order to explain how living things work and about their motions, in developing an understanding of the origins and development of various diseases related to human body and diagnosing them, in finding the cure for the diseases related to cardiovascular and pulmonary systems.