The team became the Detroit Drive in 1988 and, in 1994, became the Massachusetts Marauders for one season. Three years later, DP Fox Ventures, L.L.C. bought the team and moved it to Grand Rapids.

The team under its final name dates back to 1997. They began play as a professional team in 1998 in Grand Rapids, Michigan, when Dan DeVos purchased the Detroit Drive/Massachusetts Marauders franchise out of bankruptcy court. Grand Rapids was the smallest market in which the AFL had a franchise at the times of its first/2009 disbanding. The Rampage played in the Van Andel Arena, which is also the home of the AHL's Grand Rapids Griffins. They competed in the Central Division of the American Conference.

The Grand Rapids Rampage started play in 1998 under coach Michael Trigg. In 2001, with notable players Clint Dolezel, and Terrill Shaw, the Rampage went on to win their first ArenaBowl. This game was broadcast live on the ABC Network.

The Rampage's official mascot was a Rhinoceros named Blitz. [1]

The Rampage had a rivalry with the Nashville Kats, one which dates back to the original Kats. This rivalry solidified with the Rampage's defeat of Nashville in ArenaBowl XV. [2]

The Rampage also shared a rivalry with the Chicago Rush, known as the Amtrak Classic, after the Amtrak railway system which connects the two cities. On July 6, 2008, the Amtrak Classic added an interesting chapter as the Rampage, losers of their last six meetings with Chicago, defeated their heavily favored opponents on the road. Grand Rapids entered the game as a 6 seed, and upended the #1 seeded Rush 58-41, in a game of controversial penalties and brawls.

On March 5, 2010, it was announced that the Rampage were officially out of business and had no plans to return. [3]

The Rampage's logo was a red rhinoceros. Its end zone is unique as being the only end zone that does not feature a team name or city. It simply says Arena Football in red with a black background.

The following Rampage players were named to All-Arena Teams:

The following Rampage players were named to All-Ironman Teams:

The following Rampage players were named to All-Rookie Teams:

The Grand Rapids Rampage played in the Van Andel Arena, which is located in downtown Grand Rapids.

ArenaBowl XV was the 2001 edition of the Arena Football League's championship game, pairing the Grand Rapids Rampage of the Central Division with the Nashville Kats of the Southern Division. The Grand Rapids offense, led by quarterback Clint Dolezel and MVP Terrill Shaw, was able to outmatch the Nashville defense, and Grand Rapids won the game, 64–42. 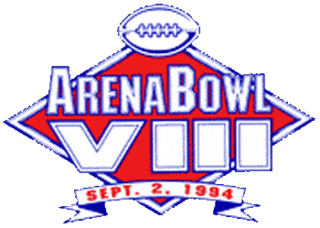 NJ-LUSO Parma is an American soccer team based in Denville, New Jersey, United States. Founded in 2007, the team plays in the USL Premier Development League (PDL), the fourth tier of the American Soccer Pyramid, in the Mid Atlantic Division of the Eastern Conference.

Angel Estrada is an American football wide receiver and defensive back for the New York Dragons of the Arena Football League. He played college football at West Virginia University.

The 2009–10 Ohio State Buckeyes women's basketball team represented The Ohio State University in the 2009–10 NCAA Division I women's basketball season. The Buckeyes, coached by Jim Foster, successfully defended their Big Ten Conference regular-season and tournament championships. They advanced to the NCAA Tournament, losing in the second round to Mississippi State.

The 2008–09 Nebraska Cornhuskers women's basketball team represented the University of Nebraska in the 2008–09 NCAA Division I women's basketball season. The Cornhuskers were coached by Connie Yori. The Cornhuskers are a member of the Big 12 Conference and did not qualify for the NCAA tournament. Those hopes were tempered with the loss of two-time first-team All-Big 12 forward Kelsey Griffin to a season-ending ankle injury in late-August. Despite playing without Griffin, the Huskers fought their way to a 9-3 record early in the season that included a dramatic come-from-behind win over No. 24 Arizona State on Dec. 28. Nebraska, which had received votes in the USA Today/ESPN Coaches Top 25 for five weeks, knocked off a Sun Devil squad that went on to advance to the 2009 NCAA Elite Eight. However, just days after defeating ASU, the Huskers took another hit inside with the loss of junior center Nikki Bober to a season-ending knee injury. Without two of their most experienced post players for a final non-conference game at five-time NCAA Final Four participant LSU, the Huskers closed non-conference play at 9-4 with all four setbacks coming to 2008 NCAA Tournament teams, including three on the road.

The 2009–10 Minnesota Golden Gophers women's hockey team represented the University of Minnesota in the 2009–10 NCAA Division I women's hockey season. The Golden Gophers were coached by Brad Frost and played their home games at Ridder Arena. The University of Minnesota hosted the 2010 NCAA Division I Women's Ice hockey Tournament's championship game on March 21, 2010 at Ridder Arena in Minneapolis. It marked the third time that Minneapolis hosted the Frozen Four. The Golden Gophers are a member of the Western Collegiate Hockey Association and attempted to win their fourth NCAA Women's Ice Hockey Championship.

The 2009 Big East football season was an NCAA football season that was played from September 5, 2009, to January 2, 2010. The Big East Conference consists of 8 football members: Cincinnati, Connecticut, Louisville, Pittsburgh, Rutgers, South Florida, Syracuse, and West Virginia. Cincinnati won the Big East Championship for the second consecutive year and was invited to the Allstate Sugar Bowl where they lost to Florida 51–24. Overall, the Big East went 4–2 in Bowl Games.

The 2018 The Citadel Bulldogs football team represented The Citadel, The Military College of South Carolina in the 2018 NCAA Division I FCS football season. The Bulldogs were led by third-year head coach Brent Thompson and played their home games at Johnson Hagood Stadium. They were members of the Southern Conference (SoCon). They finished the season 5–6, 4–4 in SoCon play to finish in a three-way tie for fifth place.