Helminthology is the study of parasitic worms (helminths). The field studies the taxonomy of helminths and their effects on their hosts.

Parasitic worms, also known as helminths, are large macroparasites; adults can generally be seen with the naked eye. Many are intestinal worms that are soil-transmitted and infect the gastrointestinal tract. Other parasitic worms such as schistosomes reside in blood vessels. 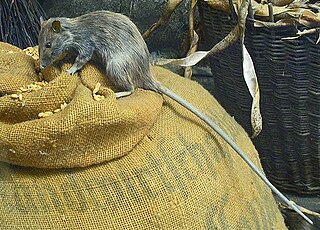 In biology and medicine, a host is an organism that harbours a parasitic, a mutualistic, or a commensalist guest (symbiont), the guest typically being provided with nourishment and shelter. Examples include animals playing host to parasitic worms, cells harbouring pathogenic (disease-causing) viruses, a bean plant hosting mutualistic (helpful) nitrogen-fixing bacteria. More specifically in botany, a host plant supplies food resources to micropredators, which have an evolutionarily stable relationship with their hosts similar to ectoparasitism. The host range is the collection of hosts that an organism can use as a partner.

The origin of the first compound of the word is the Greek ἕλμινς - helmins, meaning "worm".

Félix Dujardin was a French biologist born in Tours. He is remembered for his research on protozoans and other invertebrates. 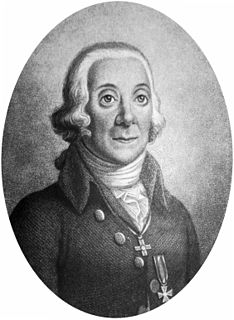 Peter Simon Pallas FRS FRSE was a Prussian zoologist and botanist who worked in Russia (1767–1810). 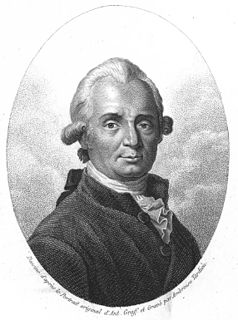 Marcus Elieser Bloch (1723–1799) was a German medical doctor and naturalist. Although he had limited education, he became a teacher in Hamburg, learned German and Latin and studied anatomy. He later settled in Berlin where he became a physician. Always interested in natural history, he amassed a private collection of natural objects. He is generally considered one of the most important ichthyologists of the 18th century, and wrote many papers on natural history, comparative anatomy, and physiology.

The Japanese parasitologist Satyu Yamaguti was one of the most active helminthologists of the 20th century; he wrote the six-volume Systema Helminthum. [5] [6]

Satyu Yamaguti was a Japanese parasitologist, entomologist, and helminthologist. He was a specialist of mosquitoes and helminths such as digeneans, monogeneans, cestodes, acanthocephalans and nematodes. He also worked on the parasitic crustaceans Copepoda and Branchiura. Satyu Yamaguti wrote more than 60 scientific papers and, more importantly, several huge monographs which are still in use by scientists all over the world and were cited over 1,000 times each. 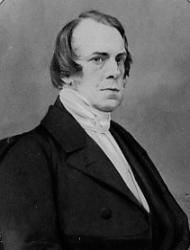 Heinrich Georg Bronn was a German geologist and paleontologist.

Max Johann Sigismund Schultze was a German microscopic anatomist noted for his work on cell theory. 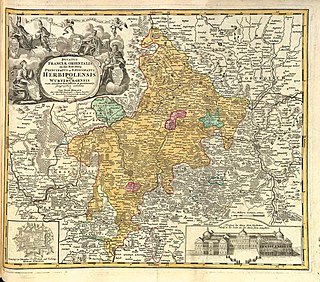 Protistology is a scientific discipline devoted to the study of protists, a highly diverse group of eukaryotic organisms. Its field of study overlaps with more traditional disciplines of phycology, mycology, and protozoology, just as protists, which, being a paraphyletic group embrace algae, some organisms regarded previously as primitive fungi, and protozoa.

Otto Friedrich Bernhard von Linstow was a German high-ranking medical officer and helminthologist. Von Linstow was born in Itzehoe north west of Hamburg. He received his medical PhD in 1864 at the University of Kiel and worked as military doctor in Hameln, later in Göttingen, where he was promoted to a major. He published his book Compendium der Helminthology in 1878 in Hannover. Von Linstow died 3 May 1916 in Göttingen. 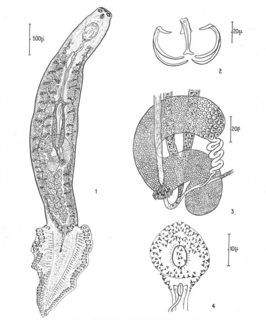 Microcotyle is a genus which belongs to the phylum Platyhelminthes and class Monogenea. Species of Microcotyle are ectoparasites that affect their host by attaching themselves as larvae on the gills of the fish and grow into adult stage. This larval stage is called oncomiracidium, and is characterized as free swimming and ciliated.

Opecoelidae is a family of trematodes. It is the largest digenean family with over 90 genera and nearly 900 species, almost solely found in marine and freshwater teleost fishes. It was considered by Bray et al. to belong in the superfamily Opecoeloidea Ozaki, 1925 or the Brachycladioidea Odhner, 1905. 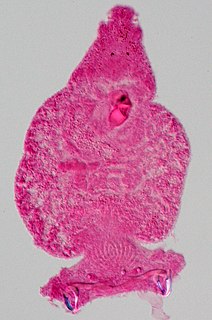 Telorchis is a genus of trematode parasites found in many herps, comprising around 70 species. This parasite is an indirect parasite, with a snail intermediate host and a reptile or amphibian definitive host. Typically found in the gastrointestinal tract of their definitive host, telorchids attach to the wall of the intestinal tract with their ventral sucker, or acetabulum. 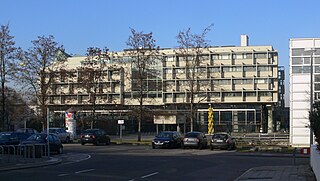 The State Academy of Fine Arts Stuttgart is a university in Stuttgart, Germany. Founded in 1761 and located since 1946 on the Weißenhof, the Academy, whose historical significance marks names such as Nicolas Guibal, Bernhard Pankok, Adolf Hölzel, Willi Baumeister, Herbert Hirche, K.R.H. Sonderborg, Alfred Hrdlicka, Marianne Eigenheer, Joseph Kosuth, Joan Jonas, Micha Ullman, offers from all art universities in the federal state Baden-Württemberg the largest numbers of courses, namely all disciplines of the visual field, and not just in an organizational network but also under one roof. This is essentially the result of the connection of the former Academy of Fine Arts with the former School of Applied Arts in 1941 as Staatliche Akademie der bildenden Künste Stuttgart, which was reconstituted in 1946 under the same name and which aimed at a broad training program as well as an intensified development in the following decades.

Johann Gottfried Bremser was a German-Austrian parasitologist and hygienist.

Microcotyle caudata is a species of monogenean, parasitic on the gills of a marine fish. It belongs to the family Microcotylidae. 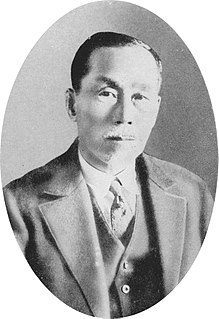 Seitarō Gotō (1867–1935) was a Japanese scientist, known for his works on the Monogenea, a class of parasitic flatworms which are ectoparasites of fishes. He also worked on other invertebrates, such as Coelenterates and Echinoderms.