Human Rights First is governed by a board of directors composed of 73 members, including a 30-person Board of Advocates and a 12-person Emeritus Board. [5]

Members of the board include:

The organization helps asylum seekers living in the greater Washington D.C., New York City, Los Angeles, and Houston metropolitan areas who do not already have legal representation, cannot afford an attorney, and need help with a claim for asylum or other protection-based form of immigration status. The organization's New York and Houston offices can also help people who are seeking asylum from within a nearby immigration detention center. [8]

A sanctuary, in its original meaning, is a sacred place, such as a shrine. By the use of such places as a haven, by extension the term has come to be used for any place of safety. This secondary use can be categorized into human sanctuary, a safe place for people, such as a political sanctuary; and non-human sanctuary, such as an animal or plant sanctuary.

An asylum seeker is a person who leaves their country of residence, enters another country and applies for asylum in this other country. An asylum seeker is an immigrant who has been forcibly displaced and might have fled their home country because of war or other factors harming them or their family. If their case is accepted, they become considered a refugee. The terms asylum seeker and refugee are often confused.

Refugee and Migrant Justice was a charitable organisation in the United Kingdom which provided legal advice and representation to those who seek protection under the Geneva Conventions and human rights laws. Refugee and Migrant Justice also lobbied on behalf of cases both individually and collectively, and was concerned with monitoring public policy in the area of asylum. 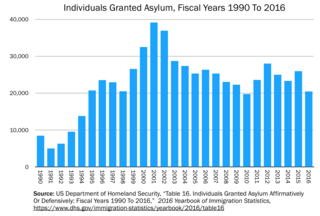 The United States recognizes the right of asylum for individuals as specified by international and federal law. A specified number of legally defined refugees who are granted refugee status outside the United States are annually admitted under 8 U.S.C. § 1157 for firm resettlement. Other aliens enter the United States either lawfully or unlawfully and apply for asylum under section 1158.

The US Human Rights Network (USHRN) is a national network composed of over 200 self-identified grassroots human rights organizations and over 700 individuals working to strengthen what they regard as the protection of human rights in the United States. The organization seeks "to challenge the pernicious belief that the United States is inherently superior to other countries of the world, and that neither the U.S. government nor the U.S. rights movements have anything to gain from the domestic application of human rights." Members include organizers, lawyers, policy groups, educators, researchers, and scholars. The US Human Rights Network is currently headquartered in Atlanta, Georgia.

The City Bar Justice Center provides pro bono legal services to low-income clients throughout New York City. It is part of the Association of the Bar of the City of New York Fund, Inc., a 501(c)(3) corporation.

Immigration equality is a citizens' equal ability or right to immigrate their family members. It also applies to fair and equal execution of the laws and the rights of non-citizens regardless of nationality or where they are coming from. Immigration issues can also be a LGBT rights issue, as government recognition of same-sex relationships vary from country to country.

Immigration Equality is a United States nonprofit organization founded in 1994. Based in New York, it both advocates for and directly represents LGBTQ and HIV-positive people in the immigration system.

The United States government holds tens of thousands of immigrants in detention under the control of Customs and Border Protection and the Immigration and Customs Enforcement (ICE). Immigrants are detained for unlawful entry to the United States, when their claims for asylum are received, and in the process of deportation and removal from the country. During Fiscal Year 2018, 396,448 people were booked into ICE custody: 242,778 of whom were detained by CBP and 153,670 by ICE's own enforcement operations. A daily average of 42,188 immigrants were held by ICE in that year. In addition, over twelve thousand immigrant children are housed by facilities under the supervision of the Office of Refugee Resettlement's program for Unaccompanied Alien Children. Prior to referral to these other agencies, the CBP holds immigrants at processing centers; between mid-May and mid-June 2019, it held between 14,000 and 18,000 immigrants.

Public interest law refers to legal practices undertaken to help poor or marginalized people, or to effect change in social policies in the public interest, on 'not for profit' terms.

Macedonian Young Lawyers Association (MYLA) is non-governmental, nonprofit and nonpolitical organization founded in 1994 as a professional NGO established with free association of citizens with aim to implement actions for full implementation of the rule of law principle, and enforcement of the contribution of young lawyers in the development of the legal profession in Macedonia through projects and activities.

LGBT migration is the movement of lesbian, gay, bisexual, transgender, and queer (LGBT) people around the world and domestically, often to escape discrimination or ill treatment due to their sexuality. Globally, many LGBT people attempt to leave discriminatory regions in search of more tolerant ones.

The National Immigrant Justice Center (NIJC) is a center affiliated with the Heartland Alliance in the United States that "is dedicated to ensuring human rights protections and access to justice for all immigrants, refugees and asylum seekers." Its executive director is Mary Meg McCarthy and it is headquartered in Chicago.

Deborah Eve Anker is an American Professor of Law and Director of the Harvard Law School Immigration and Refugee Clinical Program, which she co-founded in 1984. The HIRC is a clinical and academic program that engages students in representation, and teaches institutional context, legal doctrine and theory. She has been a Harvard academic for over 35 years. Anker is the author of the treatise, Law of Asylum in the United States, and she has co-drafted gender asylum guidelines and amicus curiae briefs. Her scholarly work on asylum is widely cited, frequently by international and domestic courts and tribunals, including the United States Supreme Court.

The Hotline for Refugees and Migrants (Hotline) is a human rights organization that utilizes direct service provision, litigation, and advocacy to uphold the rights of refugees, migrant workers, and survivors of human trafficking in Israel. In Hebrew, the organization is known as המוקד לפליטים ולמהגרים.