It caters for around 1000 pupils in years 7 to 13, including over 100 in its sixth form. It is situated in the west of Crawley, next to the A23. Ifield railway station is nearby to the south.

The school is entirely comprehensive, providing education for around 1000 pupils aged between 11 and 18 of all abilities.

Most pupils attending the school live within the catchment area, and transfer from one of the local primary schools:

The school has history dating back to 1852 – nearly 100 years before the coming of the new town. It began life as a free school opened by Mrs Sarah Robinson in the village of Crawley. A new building was opened in 1854 in what was later to become known as Robinson Road in honour of the teacher. In 1953, the school lost its primary-aged pupils with the opening of the new West Green county junior and infants' school. Many older pupils were moved to the newly opened Hazelwick School with the remainder transferring to the new Sarah Robinson secondary modern School buildings opened on the Ifield campus in 1956. [1]

At this time, the secondary modern school shared a campus with the newly opened Ifield County Grammar School, built in 1955. The schools worked closely together, eventually merging in 1966 to become Ifield comprehensive school following retirement of F.W. Wilmott, the Headmaster at the Sarah Robinson school. [2] A distinguished headmaster, Mr Bomford, was brought in to oversee the transition and he introduced a new formality, with senior teachers wearing gowns in assemblies for the first time. Ifield had a considerable reputation for sport, particularly soccer and athletics. The pupils at this time included Jeff Bryant, who went on to be a professional footballer with Wimbledon and Alan Minter, a future World Boxing Champion.

By 1984 there were some 1600 pupils on roll [3] - including Keith Newell who went on to play cricket for Sussex County Cricket Club.

Developments in the early 1980s saw the two separate buildings co-locating, with former buildings becoming the home of Ifield Middle School in 1985. In 2005, a new school building opened in the centre of the campus, with the old buildings being demolished. [4]

The campus for the school was set aside in the masterplan for Crawley New Town along the eastern edge of the neighbourhood of Ifield alongside the A23. It was shared with St Margaret's Church of England primary school, and later the Holy Cross Intermediate School.

In 2005, a new building for the school was opened in the southeasternmost corner of the large campus, maintaining the existing tree-lined boundaries. The campus is still shared with St Margaret's School, and now The Mill Primary School and the Manor Green special schools. [5]

Ifield Community College had a very successful and accomplished choir made up of students from all age groups in the school. In 1996 it was the subject of a film by SVC television, directed by Andrew Vere. [6] The choir, led by Patrick Allen (music educator), has performed at some of Europe's major venues, including St Mark's Basilica in Venice (2008),the Royal Festival Hall, London, Barcelona Cathedral, the Auditorium Stravinski in Montreux and a recent (June 2011) collaboration with the BBC Singers saw them performing and recording at Maida Vale Studios. [7] They have been six times finalists at the National Festival of Music for Youth, most recently in 2009, 2010 and 2014. [8] The choir was the subject of a feature on BBC Radio 3's Music Matters in May 2011, focusing on the integration of the choir's Chagossian Drummers. [9] The choir also represented the UK in The Let The People's Sing Gala Concert, broadcast on BBC Radio 3 in October 2011. [10] The choir broadcast live on BBC Radio 3 in March 2012 as part of the Voice's Now festival from The Roundhouse, London. [11] 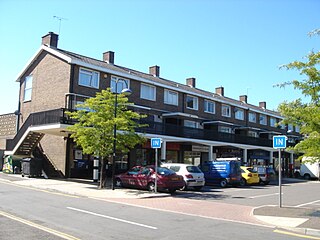 Southgate is one of the 13 residential neighbourhoods in Crawley, a town and borough in West Sussex, England. Crawley was planned and laid out as a New Town after the Second World War, based on the principle of self-contained neighbourhoods surrounding a town centre of civic and commercial buildings. Southgate was one of the four in the "inner ring" closest to the town centre, and was intended to be the largest of the nine designed in the original master plan. It was built in two stages between the 1950s and the 1970s, but retains some older buildings from before the New Town era and has "significant areas of pre-New Town character".

Tilgate is a neighbourhood within the town of Crawley in West Sussex, England. The area contains a mixture of privately developed housing, self-build groups and ex-council housing. It is bordered by the districts of Furnace Green to the north east, Southgate to the north west and Broadfield to the south west.

Ifield is a former village and now a neighbourhood within the town of Crawley in West Sussex, England. Ifield is in the west of the town and is bordered by Ifield West, Horsham, Langley Green to the north east, West Green to the east across the ring road and Gossops Green and Bewbush to the south across the Arun Valley railway line.

Patrick Allen is the English author of Singing Matters, which won the Times Educational Supplement Schoolbook Award in 1999. He also won The Guardian Award for Teacher of the Year in a Secondary School in 2004 and the NUT Teacher Award for "inspirational leadership of a music group" at the 2015 National Festival of Music for Youth. Until July 2015, he worked as an Advanced Skills Teacher, based at Ifield Community College in Crawley, England where he was also Head of Music and Chair of Arts. He was awarded Advanced Skills Teacher status in 2001. Allen is a UK judge for the Teaching Awards, a music education consultant and a PhD research student at SOAS

Oriel High School is a maintained community secondary school for pupils aged 11 to 18. It opened in September 2004 as part of a reorganisation of secondary education in Crawley, catering for just 370 pupils in years 7 and 8. It was expected to grow to around 1450 pupils by 2009. It then grew to roughly 1600 students by 2015 and has maintained this since. Oriel is the highest Ofsted rated secondary school in Crawley.

Thomas Bennett Community College (TBCC) is a secondary school with academy status for pupils aged 11 to 18. It caters to approximately 1100 pupils in Years 7 to 13, including nearly 150 in its sixth form.

Ifield railway station serves the neighbourhoods of Ifield and Gossops Green in the West Sussex town of Crawley, England. It is on the Arun Valley Line, 31 miles 66 chains (51.2 km) down the line from London Bridge, measured via Redhill. Train services are provided by Thameslink and Southern.

St Wilfrid's Catholic School is a voluntary aided comprehensive Catholic secondary school in Crawley, West Sussex, England for pupils aged 11 to 18. It caters for 936 pupils in years 7 to 13, including 181 in its sixth form.

Boundstone Community College was a co-educational comprehensive school for pupils aged 11 to 18, with around 1,000 pupils, including over 100 in the Sixth Form, which served the communities of Lancing and Sompting. The school closed on 31 August 2009, being replaced by the Sir Robert Woodard Academy. 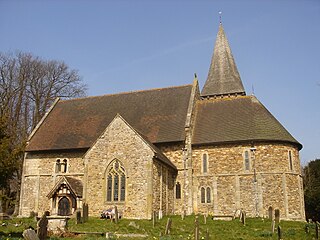 As of 2011 there were 102 listed buildings and structures in the English borough of Crawley, West Sussex. Two others have subsequently gained listed status. The Borough of Crawley is based on the town of the same name, located approximately halfway between London and Brighton. Although Crawley expanded substantially after World War II when it was designated a New Town by an Act of Parliament, many older buildings remain.

St Margaret's Church is an Anglican church in the Ifield neighbourhood of Crawley, a town and borough in West Sussex, England. It is the ancient parish church of the village of Ifield; the medieval settlement was expanded to form one of the New Town of Crawley's 13 neighbourhoods, and the church's modern parish now serves several other neighbourhoods as well.

The Ifield Friends Meeting House is a Friends meeting house in the Ifield neighbourhood of Crawley, a town and borough in West Sussex, England. Built in 1676 and used continuously since then by the Quaker community for worship, it is one of the oldest purpose-built Friends meeting houses in the world. It is classified by English Heritage as a Grade I listed building, a status given to buildings of "exceptional interest" and national importance. An adjoining 15th-century cottage is listed separately at Grade II*, and a mounting block in front of the buildings also has a separate listing at Grade II. Together, these structures represent three of the 100 listed buildings and structures in Crawley.

The Friary Church of St Francis and St Anthony is a Roman Catholic church in Crawley, a town and borough in West Sussex, England. The town's first permanent place of Roman Catholic worship was founded in 1861 next to a friary whose members, from the Order of Friars Minor Capuchin, had been invited to the area by a wealthy local family of Catholic converts. Crawley's transformation from a modest market town to a rapidly growing postwar New Town in the mid-20th century made a larger church necessary, and in the late 1950s the ecclesiastical architect Harry Stuart Goodhart-Rendel was commissioned to build a new church. The friary closed in 1980 and has been demolished, but the large brick church still stands in a commanding position facing the town centre. English Heritage has listed the building at Grade II for its architectural and historical importance. 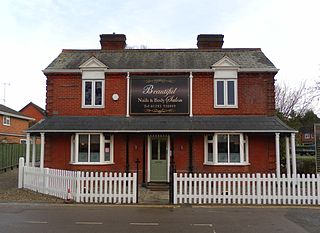 As of November 2010, there were 59 locally listed buildings in Crawley, a town and borough in the county of West Sussex in southeast England. One of these has subsequently been demolished. A locally listed building is defined as "a building, structure or feature that, whilst not statutorily listed by the Secretary of State, the Council considers to be an important part of Crawley's heritage due to its architectural, historic or archaeological significance". Crawley Borough Council administers the selection and deselection process, defines the criteria for inclusion, and produces and updates the local list.