Jamila Wideman (born October 16, 1975) is an American lawyer, activist, and former professional basketball player. She is the daughter of author John Edgar Wideman.

In her senior year, leading her team to the high school state championship, Wideman averaged 17 points, 6 steals, 6 assists, and 6 rebounds per game. In the State Championship game, she scored 27 points, had 14 steals and 8 assists, with 7 rebounds.[ citation needed ]

Her high school basketball team was the subject of a book, In These Girls Hope is a Muscle, by Madeleine Blais. [7] While in high school, Wideman published poems on the complexities of her racial identity in her high school newspaper. Shortly after the Los Angeles uprisings of 1992, she wrote and published a poem titled Black. [8]

Wideman attended Stanford University, where she continued with basketball. As a 5'6" point guard, Wideman was the smallest player on her college team.

While at Stanford University, she completed a double major, earning a B.A. in political science and African-American studies in 1997. After playing professional basketball, she earned a J.D. from New York University School of Law. [9]

Wideman was selected as the 3rd overall draft pick by the Los Angeles Sparks in the inaugural WNBA draft of collegiate players in the summer of 1997.

Wideman played for four seasons in the WNBA, [9] playing for the Los Angeles Sparks, Cleveland Rockers, and Portland Fire.

Wideman spent the 1999–2000 winter season in Israel, playing for the Elitzur Ramla club in the Israeli Basketball League. Her team won the national championship.

During the winter of 2005, Wideman reunited with college teammate Kate Starbird and played professionally in Ibiza, Spain

Upon graduation from Stanford, and during the offseasons of the WNBA, Wideman founded and directed the Stanford Athletic Alliance. [10] This bi-weekly program paired young women from East Palo Alto with players from the Stanford Women's Basketball team for individual mentoring sessions, as well as group sessions that allowed the young women to explore various academic areas through hands-on experience.

In 1997, Wideman founded and implemented another youth program called "Hoopin' with Jamila". This program combined basketball skills clinics with a reading and writing program targeted at young women of color incarcerated in the juvenile justice system in Los Angeles. The program was funded by Nike. USA Today honored Wideman as the "Most Caring Athlete" in 1998, in large part because of the success of the program. [11] The program also earned the National Council on Crime and Delinquency "Community Award", given annually to programs that attempt to provide creative alternatives to juvenile incarceration.

In 2001, Wideman participated in the Connecticut Forum, [10] where she shared the stage with Stanley Crouch, Anita Hill, Spike Lee, and Bill Russell to talk candidly about race.

Wideman collaborated with Juniper Lesnik to publish an article on playground basketball in the Sunday New York Times. [12]

Following her graduation from New York University Law School, Wideman began working as a staff attorney at Equal Justice Initiative (EJI) in Montgomery, Alabama, where she litigated on behalf of death sentences individuals in state and federal courts, and later became a staff attorney at the Legal Aid Society in New York City. [13]

In September 2018, Wideman was hired by the NBA as Vice President of Player Development. [14] 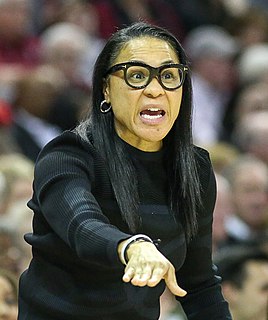 Swintayla Marie "Swin" Cash Canal is an American former professional basketball player who played professionally for 15 seasons in the Women's National Basketball Association (WNBA). She currently serves as vice president of basketball operations and team development for the New Orleans Pelicans. A prolific scorer and rebounder, as well as a capable ball handler and defender, she helped lead the University of Connecticut women's basketball team to national titles in 2000 and 2002. In her second WNBA season, she led the Detroit Shock to their first ever WNBA title. In 2015, she was named a studio analyst for MSG Networks covering the New York Knicks pre-games and post-games as well as the weekly coaches show. In 2017, Cash was named the Director of franchise development for the New York Liberty. Although Cash was intended to be inducted into the Women's Basketball Hall of Fame in June 2020, the induction ceremony was postponed to August 21, 2021, as a result of the ongoing COVID-19 pandemic.

Nykesha Simone Sales is an assistant coach at the University of Georgia. She is a former professional basketball player in the WNBA, as well as playing in the Bosnian league for the ZKK Mladi Krajisnik club. Her primary position is the small forward. Her second position is shooting guard. In 1999 Sales was added to the roster of the USA FIBA Senior National Team. Her brother Brooks Sales played forward for Villanova from 1998 to 2002, and currently plays overseas in Spain for the Club Baloncesto Breogán of Lugo.

Tamika Williams-Jeter is the head women’s basketball coach at the University of Dayton. She was a professional basketball player for the Minnesota Lynx and the Connecticut Sun in the WNBA. 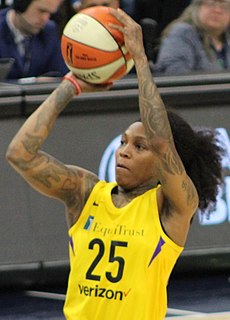 Cappie Marie Pondexter is an American former professional basketball player. She was born in Oceanside, California and raised in Chicago, Illinois. Pondexter is known for her scrappy play, quick crossovers and midrange jumpshot. In 2011, she was voted in by fans as one of the Top 15 players in Women's National Basketball Association (WNBA) history.

Kristin Just Folkl is an American former volleyball player and collegiate and professional women's basketball player. She now goes by her married name of Kristin Folkl-Kaburakis. As a volleyball player she was part of the United States National Team.

Tangela Nicole Smith is a retired American basketball player in the WNBA. Smith played the bulk of her career for the Sacramento Monarchs and the Phoenix Mercury where she won two WNBA Championships. She's currently an assistant coach at Northwestern University. 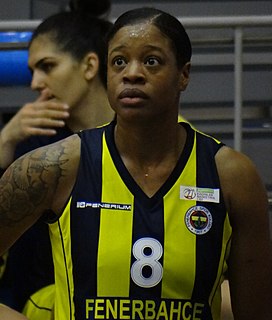 Kia Vaughn is an American-born Czech professional basketball player for the Atlanta Dream of the Women's National Basketball Association (WNBA). She attended high school at St. Michael's All Girls High School in New York, and later went on to star at Rutgers University.

Ashley Battle, is a professional basketball player. Drafted by the Seattle Storm in 2005, she played 2 games for them before being waived. She was with the New York Liberty for the 2006 through 2009 seasons. Battle played collegiately for the University of Connecticut women's basketball team. 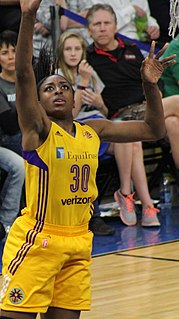 Nnemkadi Chinwe Victoria "Nneka" Ogwumike is a Nigerian-American basketball player for the Los Angeles Sparks of the Women's National Basketball Association (WNBA), after being drafted No. 1 overall in the 2012 WNBA Draft. Soon after being drafted, Ogwumike signed an endorsement deal with Nike. She is the older sister of Chiney Ogwumike, who also plays for the Sparks. Ogwumike was named WNBA MVP for the 2016 WNBA season and won the WNBA Finals the same year She was named to The W25 the league's list of the top 25 players of its first 25 years, in 2021.

Tamecka Michelle Dixon is an American professional basketball player. She announced her retirement prior to the 2010 WNBA season. 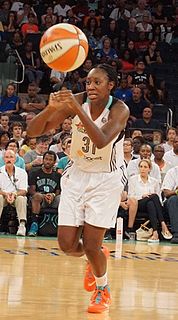 Tina Alexandria Charles is an American professional basketball player for the Seattle Storm of the Women's National Basketball Association (WNBA). Originally from Jamaica, Queens, New York City, Charles was drafted first overall in the 2010 WNBA draft by the Connecticut Sun. In 2009 and 2010, she and teammate Maya Moore led the Connecticut Huskies to two undefeated national championships. She has won three Olympic gold medals with Team USA. 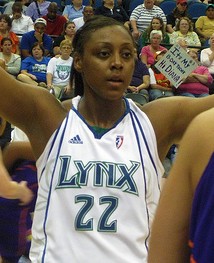 Allison Kina Hightower is an American professional women's basketball player who last played for the Washington Mystics of the Women's National Basketball Association (WNBA). She was drafted 15th overall in the 2010 WNBA Draft. 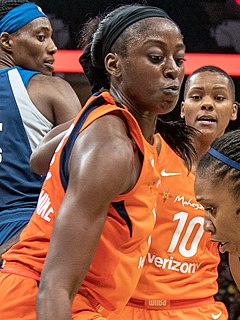 Chinenye "Chiney" Ogwumike is a Nigerian-American professional basketball player for the Los Angeles Sparks of the Women's National Basketball Association (WNBA). As of 2020, she became the first Black woman to host a national radio show for ESPN, also being the first WNBA player to do so. She was one of the first and youngest commentators ever to be named an NBA analyst for the network covering the NBA, WNBA, and variety of sports, while simultaneously playing in the WNBA. Chiney is a graduate of Stanford University, where she majored in International relations. She played in three Final Fours and finished as the conference leader in scoring and rebounding as of January 3, 2014. As of 2016, Ogwumike was elected Vice-President of the WNBA Players Association, and signed an endorsement deal with Adidas. In May 2018, Ogwumike signed a multi-year contract with ESPN to become a full-time basketball analyst.