Born in Dihua ( 棣花 ) Village, Danfeng County, Shangluo, Shaanxi in 1952, only three years after the founding of the People's Republic of China, as the son of a school teacher, Jia Yanchun (贾彦春), Jia had an early role model for his later decision to become a writer. Due to a shortage of qualified teachers in Shaanxi at the time, however, Jia's father was often away from home and so he spent much of his early childhood with his mother, Zhou Xiao'e (周小鹅). [4] With the advent of the Cultural Revolution in 1966, Jia Yanchun was accused of being a counter-revolutionary and he spent the next ten years in a labor camp. Three years later, with the closing of all schools in China following the excesses of the Red Guards, Jia was dispatched with his classmates to build reservoirs in the countryside. [5]

Jia's given name, 平 娃 (Píngwá), literally means 'ordinary child', a name suggested to Jia's parents by a fortune teller following the death of their first born child. [6] He later chose the pen name 平 凹 (Píngwā), a play on his given name, as the character for 'ordinary' also means 'flat', and in southern Shaanxi dialect the character for 'concave' (and by extension 'uneven') 凹 is pronounced wā , similar to wá ('child') in his given name. Because 'uneven' 凹 is usually pronounced āo in Standard Chinese, however, his name is often misread as "Píng'āo".

While working on the production brigade, Jia had the good fortune to attract the attention of local party cadres after volunteering to write revolutionary slogans, and thanks to their support he was sent to study literature at Northwest University in Xi'an in 1971. [5] Two years later, Jia's first short story, "A Pair of Socks", appeared in The Xi'an Daily, and was soon followed by many others. After graduating in 1975 Jia found employment at Shaanxi People's Publishing House editing the monthly magazine Chang’an , and in 1978 his short story "Full Moon" won a national award from the China Writers Association. These early were collected in Soldier Boy and Morning Songs . Like many stories published during this period (but quite different from his later work), Jia's early stories feature brave young men and women committed to the cause of Chinese socialism. [7]

Inspired perhaps by the worsening health of his father, who had fallen into alcoholism, in 1980 Jia published his first collection of rural fiction set in his home province of Shaanxi, Notes from the Highlands , and in 1982, on the strength of his published short stories and essays, Jia was admitted the Xi'an Literary Federation, allowing him to pursue writing full-time. Although he found himself under greater scrutiny, even becoming a target of criticism during the Anti-Spiritual Pollution Campaign of late 1983, Jia's sketches of everyday life in Shangzhou (the traditional name for his native region) were published to greater and greater success, with the novellas First Records of Shangzhou , Further Records of Shangzhou and More Records of Shangzhou appearing between 1983 and 1986. [8]

In 1986, Jia published his first novel, Shangzhou , an account of a young fugitive who the police who suspect of having committed a robbery in the city. He decides to hide out in his rural hometown, giving Jia a narrative framework around which to structure his popular descriptions of life in the countryside. This novel was quickly followed by two more: Turbulence in 1987 and Pregnancy in 1988. This flurry of activity was interrupted by the death of Jia's father in 1989. Grief would compel Jia to take a more introspective tone with his next project, conceived as a semi-autobiographical account of a morally depraved author from the countryside who has been corrupted by fame. In the 1993 novel Ruined City , frank depictions of various sexual acts (drawing comparisons to the Ming dynasty vernacular classic the Jin Ping Mei ) earned the book both a wide audience and a 17-year ban from the authorities, causing it to become one of the most pirated books in modern Chinese literature. [9]

After Ruined City and present day

Despite the ban, Jia continued to write, publishing a trilogy of rural novels: White Nights (1995), Earth Gate (1996), and Old Gao Village (1998). This was followed by the modern fable Wolves of Yesterday (2000), about a Wu Song-like hunter chasing a modern-day environmentalist who turns into a wolf, a historical romance and counter-history Heath Report (2002), and Qin Opera (2005), a challenging work incorporating elements of local Shaanxi operas which earned him the 2008 Mao Dun Literature Award. Over the last decade, Jia has completed five additional novels: Happy (2007), Old Kiln (2011), The Lantern Bearer (2013), Lao Sheng (2014), and Jihua (2016).

In 1992 Jia was admitted to the prestigious Chinese Writers Association, later being elected Chairman of Shaanxi branch of the organization and in 2003 he was appointed dean of the School of Humanities and the Dean of the College of Arts at Xi'an University of Architecture and Technology. [10] [11] Additionally, he is a member of the National Committee of the Chinese People's Political Consultative Conference [12] and Xi'an People's Congress, a member of the Presidium of the Chinese Writers' Association, the Xi'an Literary Federation President, an honorary chairman of the Xi'an Writers' Association, the editor-in-chief of the literary journal Essay 《美文》, and writer-in-residence at the Ocean University of China. [13] [14] [15] [16]

Jia Pingwa is known for mixing traditional vernacular story-telling with modern realism in his work, which Carlos Rojas describes as being "explicitly rooted in the breathless modernization of contemporary urban China, while at the same time... [featuring] a nostalgic fascination with the historical tradition which that same modernization process simultaneously threatens to erase." [17]

Jia Qing is a Chinese actress and singer. She is known for her roles in television dramas The Demi-Gods and Semi-Devils, The Deer and the Cauldron, The Wife's Lies and its sister series The Lover's Lies, and God of War, Zhao Yun.

Mao Dun Literature Prize is a prize for novels, established in the will of prominent Chinese writer Mao Dun and sponsored by the China Writers Association. Awarded every four years, it is one of the most prestigious literature prizes in China. It was first awarded in 1982.

Jia Zhibang is a Chinese politician, who served between 2005 and 2012 as the Director of State Forestry Administration. He also previously held the post of Governor of Shaanxi province.

Chen Zhongshi was a Chinese author. He started writing prose in 1965 and finished his magnum opus White Deer Plain in 1993. In 1979, he became a member of the Chinese Writers Association.

Huo Da is a Chinese female writer of Hui ethnicity. She also is a film editor. Her Hui name is Fa Tumai. One of her works, The Muslim's Funeral won the Mao Dun Literature Prize in 1991. It has been translated into English, French, Arabic and Urdu.

One Sentence Is Ten Thousand Sentences is a novel written by Liu Zhenyun from 2006 to 2008. It was awarded the Mao Dun Literature Prize in 2011.

Anna Gustafsson Chen is a Swedish literary translator and sinologist. She is notable for translating the work of Mo Yan into Swedish. Her translations are directly tied to Mo Yan becoming the first Chinese person to win the Nobel Prize for Literature. She has translated over 20 other notable works including the writing of Yu Hua and Su Tong.

Lu Yongfu is a Chinese translator and Director of the Chinese Translation Association.

Nicky Harman is a UK-based prize-winning literary translator, working from Chinese to English.

Qin Wenjun is an author of children's literature. She writes in Chinese.

Dong Xi is the pen name of Tian Dailin. He was born in Tian'e County in Guangxi. Dong Xi is a writer of novels, short stories, and screenplays. Six of his works have been adapted for movie and television. He is a member of China Writers Association and the All China Youth Federation and vice-chairman of Guangxi Federation of Literature and Art. He splits his time between a post at the Guangxi University for Nationalities and Beijing.

Li Er is a Chinese novelist. He is best known for his novel Brother Yingwu which won the 10th Mao Dun Literature Prize (2019), one of most prestigious literature prizes in China. He is deputy editor-in-chief of Mangyuan magazine and director of the Research Department of the Chinese Modern Literature Museum. His works have been translated into English and German.

Chen Yan is a Chinese dramatist and novelist best known for his novel The Protagonist which won the 10th Mao Dun Literature Prize in 2019, one of most prestigious literature prizes in China. He was a delegate to the 17th and 18th National Congress of the Communist Party of China.

Fan Xiaoqing is a contemporary Chinese writer. A member of China's "new realist fiction movement," she writes about everyday life in her home province of Jiangsu. 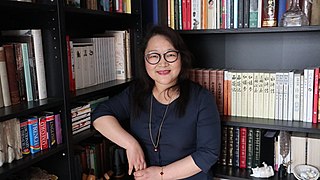 Zhang Huaicun(simplified Chinese: 张怀存; traditional Chinese: 張懷存; pinyin: Zhāng Huáicún; born December 1972) is an artist and an author of children's literature. She is Tu Ethnic Minority people, British Chinese, a member of the Royal Society of British Artists and the Chinese Writers Association.

He Jianming is a Chinese non-fiction author.