Kent Auburn McCloughan (born February 12, 1940) is a former football player and scout. He played cornerback for the American Football League's Oakland Raiders from 1965 through 1969, and for the National Football League's Raiders in 1970, but his career ended early because of a devastating knee injury.

With Willie Brown, a member of the Pro Football Hall of Fame, he is considered to be the originator or one of the earliest proficient exponents of Bump and run coverage, by which a defensive back impedes progress of the wide receiver by body contact, a style that was followed by later Oakland cornerbacks, such as Lester Hayes. [2] The strategy appeared so successful in the eyes of NFL rule-makers that, to help the offense, the rules were changed in 1974, 1977, and 1978, with each rule change favoring the receiver over the defender (see Penalty (American football).)

In 1974, the most severe rule change regarding pass receivers and defenders was enacted. This rule stipulated that a player could only make contact one time beyond 3 yards of the line of scrimmage.

In 1977, the rule was amended to aid the pass receivers yet again. Starting that season, a defender could only make contact with a receiver one time overall, whether it be within 3 yards of the line of scrimmage or further downfield.

McCloughan has three sons; Dave who played defensive back in the NFL from 1991 to 1994, Mark McCloughan and Scot, who is the former general manager of the Washington Redskins. [5]

Super Bowl XVIII was an American football game played on January 22, 1984 at Tampa Stadium between the National Football Conference (NFC) champion and defending Super Bowl XVII champion Washington Redskins and the American Football Conference (AFC) champion Los Angeles Raiders to determine the National Football League (NFL) champion for the 1983 season. The Raiders defeated the Redskins, 38–9. The Raiders' 38 points scored and 29-point margin of victory broke Super Bowl records; it remains the most points scored by an AFC team in a Super Bowl. This was the first time the city of Tampa hosted the Super Bowl and was the AFC's last Super Bowl win until Super Bowl XXXII, won by the Denver Broncos. As of 2019 it is the only Super Bowl won by a Los Angeles-based NFL team. 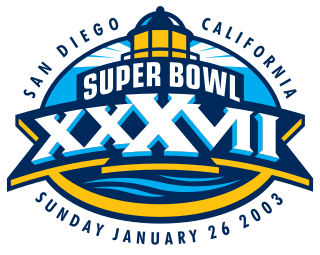 Super Bowl XXXVII was an American football game between the American Football Conference (AFC) champion Oakland Raiders and the National Football Conference (NFC) champion Tampa Bay Buccaneers to decide the National Football League (NFL) champion for the 2002 season. The Buccaneers defeated the Raiders by the score of 48–21, tied with Super Bowl XXXV for the seventh largest Super Bowl margin of victory, and winning their first ever Super Bowl. The game, played on January 26, 2003 at Qualcomm Stadium in San Diego, California, was the sixth Super Bowl to be held a week after the conference championship games. It was also the last Super Bowl played in January.

Bump and run coverage is a strategy formerly widely used by defensive backs in American professional football in which a defender lined up directly in front of a wide receiver and tried to impede him with arms, hands, or entire body and disrupt his intended route. This originated in the American Football League in the 1960s, one of whose earliest experts was Willie Brown of the Oakland Raiders. Mel Blount of the Pittsburgh Steelers specialized in this coverage to such a point as to cause numerous rule changes strictly limiting when and where a defender may make contact with a potential receiver in order to make it easier for receivers to run their routes and increase scoring.

The 1974 NFL season was the 55th regular season of the National Football League. The season ended with Super Bowl IX when the Pittsburgh Steelers defeated the Minnesota Vikings. Players held a strike from July 1 until August 10, prior to the regular season beginning; only one preseason game was canceled, and the preseason contests were held with all-rookie rosters.

The 2001 AFC Divisional Playoff game between the New England Patriots and the Oakland Raiders, also known as the Tuck Rule Game or the Snow Bowl, or sometimes referred to as Snow Bowl 2, took place on January 19, 2002, at Foxboro Stadium in Foxborough, Massachusetts, the former home stadium of the Patriots. The game, played under a heavy snowfall, was the last at Foxboro Stadium.

Scot G. McCloughan is an American football executive. He was formerly the general manager of the San Francisco 49ers and Washington Redskins, as well as a senior personnel executive for the Seattle Seahawks, helping the 49ers and Seahawks eventually reach the Super Bowl in the 2010s with rosters he helped assemble.

Dave McCloughan is a former cornerback in the National Football League.

The 2013 season was the Washington Redskins' 82nd in the National Football League. They failed to improve on their 10–6 regular season record from 2012, and suffered through a 3–13 season, which was the worst record that the team had posted since 1994, resulting in the firing of head coach Mike Shanahan and most of his staff after four seasons.