Oakland
Location in the United States

Quarterback Daryle Lamonica, claimed on waivers from the Buffalo Bills in the offseason, led the Raiders to a 13–1 record, throwing 30 touchdown passes in the process. The Oilers went from last place in the East in 1966 (3–11) to first in 1967, [6] beating out the New York Jets by a game. Most of the Oilers' offense centered on big fullback Hoyle Granger, and a midseason quarterback trade for the shifty Pete Beathard (sending their own starter, Jacky Lee, to the defending champion Kansas City Chiefs) proved to be the spark that turned Houston's season around.

The two teams had met three weeks earlier in Houston, with Oakland winning 19–7 to clinch the Western division title. [2] [6] [7]

In contrast to the frigid conditions earlier in the day at the NFL championship game in Green Bay, the temperature for the AFL title game in northern California was 47 °F (8 °C). [3] The host Raiders were ten-point favorites. [8] [9]

Oakland won 40–7 and shredded the Oilers with 364 yards of offense, including 263 yards rushing, while allowing just 146 total yards and 38 yards on the ground. The Raiders also forced three turnovers and lost none themselves. [3] [4] [10]

Oakland's Dave Grayson returned the opening kickoff 47 yards, sparking a drive into scoring range, but it ended with no points when George Blanda missed a 38-yard field goal attempt. Houston then mounted their own drive into Raiders territory, but they also came up empty as a result of a fumble by tight end Alvin Reed on the Oakland 30-yard line that was forced and recovered by linebacker Dan Conners. Following a three-and-out for each team, Rodger Bird returned Jim Norton's 39-yard punt 9 yards to the Raiders 43-yard line, where they drove 28 yards to score on Blanda's 37-yard field goal with 3:06 left in the first quarter. Houston's next drive stalled on their own 44 and Norton had to punt again on the quarter's final play. Despite their 3–0 deficit, the Oilers seemed to be playing fairly well, having outgained Oakland in total yards, 93-52.

This quickly changed on the first play of the second quarter. Hewritt Dixon took a handoff from Lamonica, ran around the left end, and took off down the sidelines untouched for an AFL championship record 69-yard touchdown run, giving the Raiders a 10–0 lead. The rest of the game would be a desperate struggle for Houston's defense to keep the Raiders from adding more points, sometimes successful, but often not. Oakland defensive back Willie Brown intercepted a pass from Beathard on the Oilers next drive, though this only led to a missed 44-yard attempt by Blanda. After a punt, the Raiders drove to the Houston 36, but came up short again when Dixon was stuffed for no gain on 4th and 1. After another Norton punt, Oakland drove from their own 22-yard line to the Oilers 17. Faced with 4th and 1 again, the Raiders sent their field goal unit on to the field, but ran a fake field goal play with Lamonica (the holder on special teams) throwing a 17-yard touchdown pass to tight end Dave Kocourek. This gave Oakland a 17–0 lead with just 12 seconds left in the half.

Oakland completely took over the game in the second half. Houston defensive back Zeke Moore fumbled the opening kickoff when tackled by Duane Benson, and Ken Herock recovered the ball, returning it 6 yards to the Houston 29. Seven plays later, Lamonica made the score 24–0 with a 1-yard touchdown run. Then after a three-and-out, the Raiders drove 56 yards to go up 27-0 on Blanda's 40-yard field goal. The next Houston drive resulted in yet another three-and-out, and Norton's 33-yard punt gave Oakland the ball on their 46. Houston managed to force a punt of their own, but Mike Eischeid's 44-yard kick pinned them back at their own 2-yard line. The next drive resulted in more of the same, another three-and-out and another Norton punt, which Bird returned 19 yards to the Oilers 31-yard line. Oakland then scored on a 7-play drive that ended on a 40-yard Blanda field goal, putting the team up by a score of 30–0.

This time, Houston managed to respond, driving 78 yards in 5 plays to score on Beathard's 5-yard touchdown pass to Charley Frazier, cutting the score to 30–7. But by this point, less than 13 minutes remained in the game. Meanwhile, Oakland struck back with a 36-yard field goal, and later finished off the scoring with a 7-play, 48-yard drive that ended on Lamonica's 12-yard touchdown pass to Bill Miller. [11] [12]

Neither quarterback had a particularly good day. Beathard completed just 15 of 35 passes for 142 yards and a touchdown, with 1 interception. Frazier was the top receiver of the game with 7 receptions for 81 yards and a touchdown. Bobby Jancik returned 4 kickoffs for 100 yards. Lamonica finished the day with 10 completions in 24 attempts for 111 yards and two touchdowns, while also rushing for 22 yards and another score. Dixon rushed for 144 yards and a touchdown, and caught a pass for 8 yards. Banaszak rushed for 116 yards on just 15 carries, and caught a 4-yard pass. Blanda set an AFL championship record with four field goals on six attempts. Norton also had a busy day for Houston, punting 11 times for 423 yards.

The upcoming Super Bowl II awarded an additional $15,000 per player for the winners and $7,500 each for the losing team.

Daryle Pasquale Lamonica is a former American football quarterback who played in the American Football League (AFL) and the National Football League (NFL). He was nicknamed "The Mad Bomber" due to his affinity for throwing the long pass in virtually any situation.

The National Football League playoffs for the 1973 season began on December 22, 1973. The postseason tournament concluded with the Miami Dolphins defeating the Minnesota Vikings in Super Bowl VIII, 24–7, on January 13, 1974, at Rice Stadium in Houston, Texas.

The National Football League playoffs for the 1974 season began on December 21, 1974. The postseason tournament concluded with the Pittsburgh Steelers defeating the Minnesota Vikings in Super Bowl IX, 16–6, on January 12, 1975, at Tulane Stadium in New Orleans, Louisiana.

The National Football League playoffs for the 1976 season began on December 18, 1976. The postseason tournament concluded with the Oakland Raiders defeating the Minnesota Vikings in Super Bowl XI, 32–14, on January 9, 1977, at the Rose Bowl in Pasadena, California. 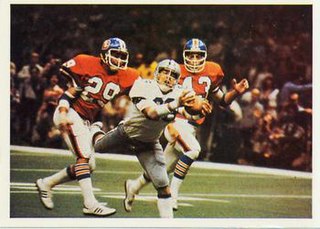 The National Football League playoffs for the 1980 season began on December 28, 1980. The postseason tournament concluded with the Oakland Raiders defeating the Philadelphia Eagles in Super Bowl XV, 27–10, on January 25, 1981, at the Louisiana Superdome in New Orleans, Louisiana.

The 1960 Oakland Raiders season was the inaugural one for the franchise and for the American Football League (AFL). Head coach Eddie Erdelatz led the team to a 6–8 finish, third out of four teams in the Western Division.

The 1970 Oakland Raiders season was the team's 11th season in Oakland. It was also their first season as members of the NFL. The Raiders would ultimately win their fourth consecutive division title. They advanced to the AFC Championship Game, where they lost to the Baltimore Colts.

The 1972 Houston Oilers season was their 13th season overall and third with the league. The team failed to improve on their previous season's output of 4–9–1, winning only one game. They missed the playoffs for the third consecutive season.

The 1969 Houston Oilers season was the 10th and final season for the Houston Oilers as a professional AFL franchise before moving to the National Football League when the two merged. The team equaled their 1968 record of 7–7 (.500), finishing 6–6–2. They qualified for the playoffs but lost in the Divisional Round to the Oakland Raiders.

The 1968 AFL Championship Game was the ninth annual AFL championship game, played on December 29 at Shea Stadium in Queens, New York City, New York. It matched the defending champion Oakland Raiders (12–2) of the Western Division and the host New York Jets (11–3) of the Eastern Division, who were slight favorites. The Raiders had hosted a tiebreaker playoff game the week before against the Kansas City Chiefs (12–2) to determine the Western Division champion, while the Eastern champion Jets were idle.