The Detroit Lions (9–2–1) of the Western Conference met the Cleveland Browns (9–3) of the Eastern Conference in the NFL title game for the third consecutive year. The Lions won the previous two: 17–7 at Cleveland in 1952 and 17–16 at home in Briggs Stadium in 1953. They were attempting to become the first team to win three consecutive league titles in the championship game era (since 1933). [1] The Browns, who entered the league only in 1950 with the demise of the All-America Football Conference, faced a particularly daunting task in taking on the Lions, having lost all eight of the franchise's previous matches against the Detroit club. [2]

The Lions were led by quarterback Bobby Layne, running back Doak Walker, and head coach Buddy Parker. The Browns were led by head coach Paul Brown and quarterback Otto Graham. The Lions had won the regular season meeting 14–10 the week before on December 19, also at Cleveland, with a late touchdown. The game had been postponed from early October, due to the World Series, and both teams had already clinched their berths in the title game. [3] Detroit was a slight favorite (2½ to 3 points) to three-peat as champions. [4] [5]

The underdog Browns won the title at home in a rout, 56–10; placekicker Lou Groza made eight extra points, a new title game record, among many. [6]

Note: Players often played both offense and defense in this period. Although free substitution existed from 1943, what are today considered defensive starters were categorized as "substitutes" in this era.

On its first possession, Lions' fullback Bill Bowman ran for 50 yards but lost the ball to Cleveland on a fumble. [2] The Lions regained possession at the Cleveland 35 when Joe Schmidt intercepted an Otto Graham pass. The Browns defense held and Detroit was forced to settle for a 36-yard field goal by Doak Walker. [2]

Billy Reynolds returned the subsequent kickoff 46 yards, crossing midfield to the Lions' 41 yard line. Cleveland was forced to punt but a roughing penalty gave the Browns new life and Graham hit Ray Renfro with a 35-yard pass for a touchdown. Following the Lou Groza conversion, the score stood at Cleveland 7, Detroit 3. [2]

On the next possession another Layne interception by defensive back Paul was run back 33 yards, setting up Cleveland in the red zone on the Detroit 8 yard line, with Graham hitting left end Darrell Brewster for the score. Following Groza's kick the score was Browns 14, Lions 3. [2]

Detroit was again stopped on their next possession and its punt was taken by Cleveland's Billy Reynolds and returned 46 yards to the Detroit 10 yard line. Grinding the ball to the 1 yard line, Graham ran a quarterback sneak and hit paydirt. Following the Groza conversion the score stood at Browns 21, Lions 3. [2]

Lion running back Lewis Carpenter tore up a 52-yard run in Detroit's next possession, setting up Detroit for its only touchdown of the day when fullback Bill Bowman scored from five yards out. Following the conversion by Lions kicker Doak Walker, it was Browns 21, Lions 10. [2]

Cleveland was forced to punt, but on the next Detroit possession defensive lineman McCormack ripped the ball from Layne, with the Browns recovering on the Detroit 31. Four plays later Graham ran for another touchdown, reaching the end zone standing up. With the conversion the score was Browns 28, Lions 10, and the route was on. [2]

Yet another Bobby Layne pass was intercepted by Cleveland's Michaels, who was listed as a substitute fullback and was thus probably playing the modern equivalent of the safety position. With the ball on the Lions' 31, Otto Graham launched a pass to halfback Ray Renfro, who made a great catch at the five yard line and took the ball over the score. With Groza's conversion, the halftime score was Browns 35, Lions 10. [2]

The Browns opened the second half with a six play drive, highlighted by a 43-yard strike from Otto Graham to Pete Brewster, who was stopped just short of the goal line. Graham scored his third touchdown of the day with a quarterback sneak, with Groza converting to make the score Browns 42, Lions 10. [2]

Yet another pick by Konz set up the final touchdown of the day, when substitute halfback Chet Hanulak scored from the 10. With Groza's extra point, the final score was reached: Browns 56, Lions 10. [2]

Detroit quarterback Layne (18 for 42, passing for 177 yards) was intercepted six times, with Len Ford and Kenny Konz pulling in two each. The Browns also recovered three Detroit fumbles, with two of the recoveries leading to scores.

The 56–10 score was the second most lopsided in the 22-year history of the event, exceeded only by the 1940 game, in which the Chicago Bears embarrassed the Washington Redskins 73–0. [2] The victory was the second World Professional Football Championship win for the Browns. [2] 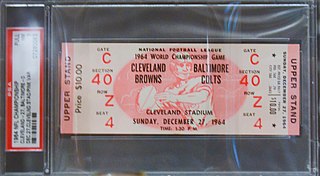 The 1964 National Football League Championship Game was the 32nd annual championship game, held on December 27 at Cleveland Stadium in Cleveland, Ohio. With an attendance of 79,544, it was the first NFL title game to be televised by CBS. 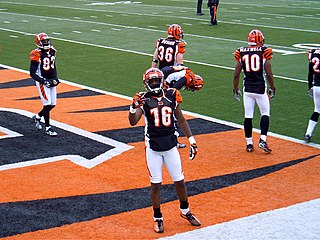 The 2007 Cincinnati Bengals season was the 38th season for the team in the National Football League and their 40th overall season. The team attempted to improve upon their 8–8 record in 2006 and were looking to return to the playoffs after narrowly missing them. They failed to do so, finishing with a 7–9 record.

The 1946 Cleveland Browns season was the team's first in the All-America Football Conference (AAFC). The Browns, coached by Paul Brown, ended the year with a record of 12–2, winning the AAFC's Western Division. Led by quarterback Otto Graham, fullback Marion Motley and ends Dante Lavelli and Mac Speedie, the team won the first AAFC championship game against the New York Yankees.

The 1947 Cleveland Browns season was the team's second in the All-America Football Conference (AAFC). Coached by Paul Brown, Cleveland finished with a 12–1–1 win–loss–tie record, winning the western division and the AAFC championship for the second straight year. As in 1946, quarterback Otto Graham led an offensive attack that featured fullback Marion Motley and ends Dante Lavelli and Mac Speedie.

The 1948 Cleveland Browns season was the team's third in the All-America Football Conference (AAFC). After winning the AAFC crown in 1946 and 1947, the league's first two years of existence, the Browns repeated as champions in 1948 and had a perfect season, winning all of their games.

The 1949 Cleveland Browns season was the team's fourth and final season in the All-America Football Conference (AAFC). The Browns finished the regular season with a 9–1–2 win–loss–tie record and beat the San Francisco 49ers to win their fourth straight league championship. In the season's sixth game on October 9, 1949, the 49ers stopped the Browns' professional football record unbeaten streak after 29 games. The streak started two years before on October 19, 1947, and included two league championship games and two ties.

The 1950 Cleveland Browns season was the team's first in the National Football League (NFL) after playing the previous four years in the All-America Football Conference (AAFC), which folded after the 1949 season. The Browns finished the regular season with a 10–2 win–loss record and beat the Los Angeles Rams to win the NFL championship. It was Cleveland's fifth consecutive championship victory, the previous four having come in the AAFC.

The 1957 Cleveland Browns season was the team's eighth season with the National Football League. They were 9–2–1 in the regular season and won the Eastern Conference title, but lost the championship game to the Detroit Lions, 59–14.

The 1962 Cleveland Browns season was the team's 13th season with the National Football League. 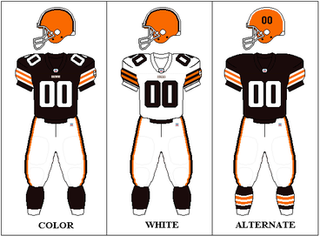 The 2008 Cleveland Browns season was the team's 60th season as a professional sports franchise and its 56th season as a member of the National Football League (NFL). The Browns finished with a 4–12 record and failed to qualify for the playoffs. The season marked Romeo Crennel's fourth year as head coach of the Browns. Cleveland played all of their home games at Cleveland Browns Stadium in Cleveland, Ohio. To end the 2008 season, the Browns offense failed to score a touchdown for 25 consecutive quarters. Also from 2008 to 2020, the Browns have failed to surpass a winning record, thus they failed to make the playoffs for the sixth straight season.

The 1955 Pittsburgh Steelers season was the franchise's 23rd in the National Football League.

The 1957 Detroit Lions season was the franchise's 28th season in the National Football League (NFL) and their 24th as the Detroit Lions. The Lions won their fourth and most recent NFL championship.

The 1953 Detroit Lions season resulted in the Lions winning their second consecutive and third overall National Football League (NFL) championship. In their fourth year under head coach Buddy Parker, the Lions compiled a 10–2 record during the regular season, outscored opponents 271 to 205, finished in first place in the NFL's Western Division, and defeated the Cleveland Browns 17–16 in the NFL Championship Game at Briggs Stadium in Detroit.

The 1952 Detroit Lions season resulted in the Lions winning their second National Football League (NFL) championship, having won their first championship 17 years earlier in 1935. The team's co-captains were halfback Bob Hoernschemeyer and defensive tackle John Prchlik, and defensive end Jim Doran was selected as the team's most valuable player. In their third year under head coach Buddy Parker, the 1952 Lions compiled a 9–3 record during the regular season, finished in a tie with the Los Angeles Rams for first place in the NFL's National Conference, defeated the Rams in a tiebreaker game, and defeated the Cleveland Browns, 17–7, in the 1952 NFL Championship Game at Municipal Stadium in Cleveland.

The 2010 Cleveland Browns season was the team's 62nd season as a professional sports franchise and its 58th season as a member of the National Football League (NFL). The team failed to break the longest playoff appearance drought in franchise history, a current streak of eight seasons without reaching the playoffs. The team finished 5–11, matching its win total from the 2009 season and placed third in the AFC North. This season marked the first season under the leadership of team president Mike Holmgren and general manager Tom Heckert. It also marked the second season under head coach Eric Mangini. The Browns played all of their home games at Cleveland Browns Stadium in Cleveland, Ohio.