The Kohala Bridge across the Jhelum River, a tributary of the Indus River, forms part of one of the land routes from the Azad Kashmir to Pakistan. 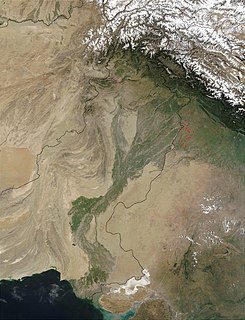 The Indus River is one of the longest rivers in Asia, originating in the Tibetan Plateau in the vicinity of Lake Manasarovar, the river runs a course through Ladakh towards the Gilgit-Baltistan region Hindukush ranges, and then flows in a southerly direction along the entire length of Pakistan to merge into the Arabian Sea near the port city of Karachi in Sindh. It is the longest river and national river of Pakistan. 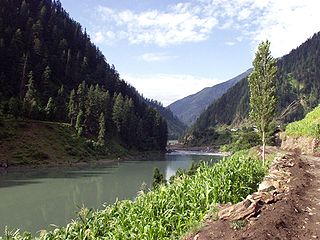 The Jhelum River is a river in northern India and eastern Pakistan. It is the westernmost of the five rivers of the Punjab region, and passes through the Kashmir Valley. It is a tributary of the Indus River and has a total length of about 725 kilometres (450 mi). 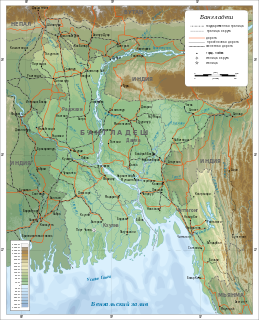 Feni River is a river in southeastern Bangladesh. It is a trans-boundary river with an ongoing dispute about water rights. The Feni River originates in South Tripura district and flows through Sabroom town and then enters Bangladesh. Muhuri River, also called Little Feni, from Noakhali District joins it near its mouth. The river is navigable by small boats as far as Ramgarh, about 80 kilometres (50 mi) upstream. 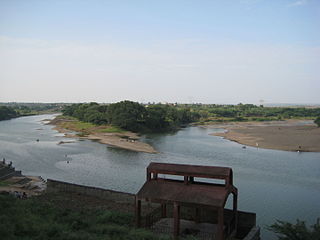 The Bhima River is a major river in Western India and South India. It flows southeast for 861 kilometres (535 mi) through Maharashtra, Karnataka, and Telangana states, before entering the Krishna River. After the first sixty-five kilometers in a narrow valley through rugged terrain, the banks open up and form a fertile agricultural area which is densely populated.

The Mula is a river in Pune, India. It is dammed near the Western Ghats at the Mulshi Dam that forms the Mulshi Lake. Further downstream, in Pune city, it merges with the Pawana River on the left bank and Mutha River on the right bank to form the Mula-Mutha river, which later meets the Bhima River.

Pind Dadan Khan, (PDK) a City in Jhelum District, Punjab, Pakistan, is the capital of Pind Dadan Khan Tehsil, which is an administrative subdivision of the district.

The Karkheh or Karkhen کرخه is a river in Khūzestān Province, Iran that rises in the Zagros Mountains, and passes west of Shush, eventually falling in ancient times into the Tigris just below its confluence with the Euphrates very near to the Iran-Iraq border. In modern times, after approaching within 16 kilometres (10 mi) of the Dez River, it turns to the southwest and then, northwest of Ahvaz, turns northwest and is absorbed by the Hawizeh Marshes that straddle the Iran–Iraq border. Its peculiarly sweet water was sacred to the use of the Persian kings. Ancient names for the Karkheh should be treated as conjectural because the bed of the river has changed in historic times, and because a nearby watercourse between the Karkheh and the Dez River, the Shaur, confuses the identification.

The Youyi Bridge is a bridge on the Karakoram Highway at Thakot in Khyber-Pakhtunkhwa province of Pakistan. Its inauguration was in August 27, 2004. 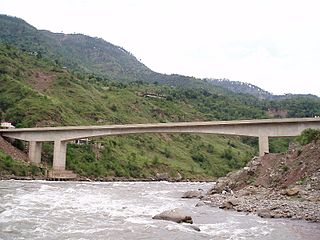 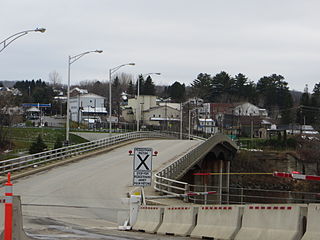 The Saint Leonard–Van Buren Bridge is an international bridge, which connects the communities of St. Leonard, New Brunswick in Canada and Van Buren, Maine in the United States, across the Saint John River.

Mustafabad, is a town and union council of Depalpur Tehsil in the Okara District of Punjab Province, Pakistan., it is located at 30°53'32N 73°29'56E and lies to the north-east of the district capital Okara.

Jammu and Kashmir, also known as Kashmir and Jammu, was a princely state during the British East India Company rule as well as the British Raj in India from 1846 to 1947. The princely state was created after the First Anglo-Sikh War, when the East India Company, which had annexed the Kashmir Valley, Jammu, Ladakh, and Gilgit-Baltistan from the Sikhs as war indemnity, then sold the region to the Raja of Jammu, Gulab Singh, for rupees 75 lakh. (75,00,000)

Ausia is a village in the Union council of Dewal, Murree Tehsil (مری), Rawalpindi District, Pakistan. It borders Union Councils of Rawat, Phagwari & Malkot. It is located on Upper Kohala Road at 33°59'0N .73°28'0E at an altitude of 1712 meters (5620). Ausia's boundary starts from spoting Murree-Meridian Marriage Hall, from where the road starts its descent down towards the core village and spreads up to 'Peida' near ex-PM of Pakistan Shahid Khaqan Abbasi's residence & here the next model village 'Dewal' situated in the same UC initiates.

Mahldara is a village of Union Council Birpani in Bagh District, Azad Kashmir, Pakistan. It is located 10 km north of Bagh city and at an altitude of 4000 metres.

The Pequonnock River is a 16.7-mile-long (26.9 km) waterway in eastern Fairfield County, Connecticut. Its watershed is located in five communities, with the majority of it located within Monroe, Trumbull, and Bridgeport. The river has a penchant for flooding, particularly in spring since the removal of a retention dam in Trumbull in the 1950s. There seems to be a sharp difference of opinion among historians as to just what the Indian word Pequonnock signifies. Some insist it meant cleared field or open ground; others are sure it meant broken ground; while a third group is certain it meant place of slaughter or place of destruction.

The Nandu River is the longest river in Hainan Province, China. Its tributary is the Xinwu River. The river discharges into the Nandu River estuary at Haikou city, and then into Qiongzhou Strait.

The Kohala Hydropower Project is a proposed run-of-the-river, high head project of 316 meters that will be located near Kohala, in Azad Kashmir, Pakistan. 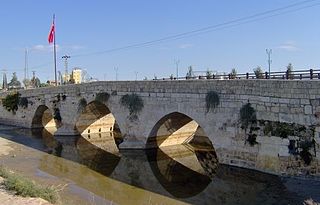 Baç Bridge is a bridge in Tarsus in Mersin Province, Turkey

Islamabad–Muzaffarabad Branch Line is one of several railway lines in Pakistan proposed by Pakistan Railways. The proposed 128 km (80 mi) line begins at Nur station on the Karachi–Peshawar Railway Line and will end at Muzaffarabad in Azad Jammu & Kashmir.