Born in the city of Pskov, USSR, on April 4, 1934, Lyubarsky graduated from the Moscow State University in 1956 and worked as an astrophysicist at the All-Union Institute of Scientific and Technical Information of the USSR Academy of Sciences. His academic work included studies on meteors and space biology. He was also working in the Soviet program of interplanetary exploration of Mars. He authored several books on astrobiology and translated scientific works into Russian, including books by Fred Hoyle. [1]

In the mid-1960s, Lyubarsky became active in the civil rights movement and became a contributing editor of various samizdat publications. These included the Chronicle of Current Events which circulated between April 1968 and August 1983, documenting extrajudicial persecution, arrests, court proceedings, incarceration in psychiatric hospitals and other forms of harassment in the Soviet Union.

In January 1972, Luybarsky's apartment was searched by the police and more than 600 documents, manuscripts and books were confiscated. [2] The search was followed by his arrest three days later on charges of anti-Soviet agitation and propaganda. Following his conviction on October 30, 1972, [3] Lyubarsky spent the next five years in various labor camps and prisons in Mordovia, as well as the notorious Vladimir Central Prison.

While still in the camps, he initiated the idea of celebrating a Day of the Political Prisoner in the USSR. [4] The initiative spread quickly to other camps and prisons. The annual event later became Russia's Day of Remembrance of the Victims of Political Repressions. [5]

After his release, Lyubarsky was exiled to Tarusa, a town in the Moscow Region, where he was kept under surveillance. During this period, he became one of the managers of the Public Aid Fund set up by the writer Alexander Solzhenitsyn to aid political prisoners, and a member of the Soviet branch of Amnesty International. However, mounting pressures by the authorities and the imminent threat of a renewed arrest forced Lyubarsky and his family into emigration in October 1977. Stripped of his citizenship, he sought political asylum in West Germany.

In Munich, Lyubarsky founded a bulletin, Vesti iz SSSR [6] (USSR News Brief), a periodical providing comprehensive information between November 1978 and December 1991 about the human rights situation and resistance to the Communist regime in the Soviet Union. Published in Russian and English twice a month, this bulletin included an annual "List of Political Prisoners in the USSR", a yearbook of political prisoners complete with case details and family contacts. The list appeared until 1989, when the last Soviet political prisoner was released, and was widely used for reference by private citizens, human rights organizations and numerous parliamentary commissions, as well as the United States Congress. [7] [8]

Beginning in 1984, Lyubarsky also edited and published the magazine Strana i Mir (The Country and the World). [9] Taking its name from a well-known book by the political dissident and Nobel laureate, Andrei Sakharov, the magazine was intended for a broad readership. It reported not only on repression and resistance in the USSR but also economic and political developments in the rest of the world.

Lyubarsky returned to Russia following the breakup of the USSR. His citizenship was restored in June 1992.

Lyubarsky was one of the authors of the current Constitution of the Russian Federation and drafted a number of its articles, including those on the right to freedom of movement and residence within the borders of Russia. [10]

In 1990, he joined the Soviet-International commission chaired by Irwin Cotler investigating the fate of Raoul Wallenberg, the Swedish diplomat who disappeared into the Soviet prison system. [11]

In February 1993, he joined the magazine The New Times , where he was appointed first deputy editor in chief. He continued to write articles in defense of democracy and human rights. He was strongly opposed to the First Chechen War and took Duma deputy and film-maker Stanislav Govorukhin to court for defamation, when the latter quoted from a letter supposedly showing that certain Russian journalists were in the pay of the Chechen authorities. [12] (After his death, Lyubarsky's widow Galina won the case against Govorukhin, and received the nominal damages — one Russian rouble — that he had demanded.)

From 1993 to 1996, Lyubarsky led the revived Moscow Helsinki Group, a watchdog organization first set up in the mid-1970s to monitor Soviet compliance with the human rights provisions in the 1975 Helsinki Final Act.

Lyubarsky died tragically of a heart attack, while vacationing in Indonesia, on 23 May 1996, aged 61.

An online version of USSR News Brief, the historic fortnightly bulletin compiled and issued by Lyubarsky in Munich, in the original Russian (Vesti iz SSSR), offers historians and activists the thousands of long and short reports provided by this unique source in the crucial and ambivalent years of Soviet history from 1978 to 1987 [13] (and see below "External Links").

Lyubarsky's earlier years as a dissident and his work abroad, between 1976 and 1992, were recognised, posthumously, in 2000 when the International Press Institute [7] named him a World Press Freedom Heroes of the past 50 years.

Human rights in the Soviet Union were severely limited and for most of its existence the population was mobilized in support of the single State ideology and the policies promoted by the Communist Party. Prior to April 1991 only one political party was permitted in the Union of Soviet Socialist Republics (USSR) and the members of the Communist Party held all key positions, whether in the State itself or in other organizations. Freedom of speech was suppressed and dissent was punished. Independent political activities were not tolerated, whether these involved participation in free labour unions, private corporations, independent churches or opposition political parties. The state's proclaimed adherence to Marxism-Leninism restricted any rights of citizens to private property. 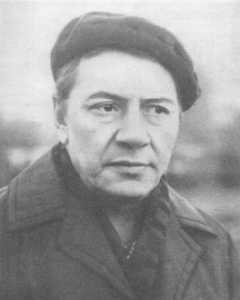 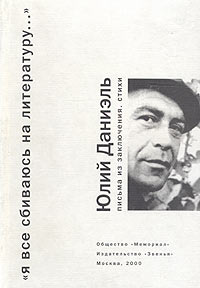 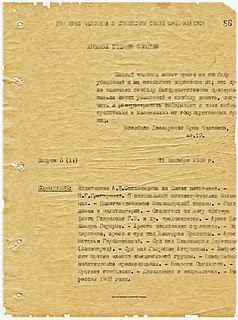 A Chronicle of Current Events was one of the longest-running samizdat periodicals of the post-Stalin USSR. The unofficial publication reported violations of civil rights and judicial procedure by the Soviet government and responses to those violations by citizens across the Soviet Union. Appearing first in April 1968, it soon became the main voice of the Soviet human rights movement, inside the country and abroad.

Soviet dissidents were people who disagreed with certain features in the embodiment of Soviet ideology and who were willing to speak out against them. The term dissident was used in the Soviet Union in the period following Joseph Stalin's death until the fall of communism. It was used to refer to small groups of marginalized intellectuals whose modest challenges to the Soviet regime met protection and encouragement from correspondents. Following the etymology of the term, a dissident is considered to "sit apart" from the regime. As dissenters began self-identifying as dissidents, the term came to refer to an individual whose non-conformism was perceived to be for the good of a society.

Author and publisher Valery Nikolaevich Chalidze was a Soviet dissident and human rights activist, deprived of his USSR citizenship in 1972 while on a visit to the US.

Day of Remembrance of the Victims of Political Repressions, is an annual day of remembrance for victims of political repression in the Soviet Union.

Alexander Pinkhosovich Podrabinek is a Soviet dissident, journalist and commentator. During the Soviet period he was a human rights activist, being exiled, then imprisoned in a corrective-labour colony, for publication of his book Punitive Medicine in Russian and in English.

Leonid Ivanovych Plyushch was a Ukrainian mathematician and Soviet dissident.

Sergei Adamovich Kovalyov is a Russian human rights activist and politician and a former Soviet dissident and political prisoner.

The Committee on Human Rights in the USSR was founded in 1970 by dissident Valery Chalidze together with Andrei Sakharov and Andrei Tverdokhlebov.

Andrei Nikolayevich Tverdokhlebov was a Soviet physicist, dissident and human rights activist. In 1970, he founded - along with Valery Chalidze and Andrei Sakharov - the Committee on Human Rights in the USSR. In 1973, Tverdokhlebov - along with Valentin Turchin - founded the first chapter of Amnesty International in the Soviet Union. He also helped found Group 73, a human rights organization that helped political prisoners in the Soviet Union. He was the author/editor of several samizdat publications while in the Soviet Union, which were compiled in the book, "In Defense of Human Rights", published by Khronika Press, New York, in 1975.

The Initiative or Action Group for the Defense of Human Rights in the USSR was the first civic organization of the Soviet human rights movement. Founded in 1969 by 15 dissidents, the unsanctioned group functioned for over six years as a public platform for Soviet dissidents concerned with violations of human rights in the Soviet Union.

The Solzhenitsyn Aid Fund was a charity foundation and support network set up by Aleksandr Solzhenitsyn and Alexander Ginzburg that distributed funds and material support to political and religious prisoners across the Soviet Union throughout the 1970s and 1980s.

In the 1960s a human rights movement began to emerge in the USSR. Those actively involved did not share a single set of beliefs. Many wanted a variety of civil rights — freedom of expression, of religious belief, of national self-determination. To some it was crucial to provide a truthful record of what was happening in the country, not the heavily censored version provided in official media outlets. Others still were "reform Communists" who thought it possible to change the Soviet system for the better.

Sergei Ivanovich Grigoryants is a Soviet dissident and former political prisoner, journalist, literary critic, chairman of the Glasnost Defense Foundation. He was imprisoned for 10 years in Chistopol jail as a political prisoner for anti-Soviet activities, from 1975 to 1980 and then four more years starting in 1983 on similar charges.

Malva Noyevna Landa was a geologist. She was the author of multiple articles a veteran of the human rights movement in the USSR, and member of the Moscow Helsinki Group since its founding in 1976. She received the Officer of the Order of the Cross of Vytis.