Lacrimosa No. 2 is a sacred composition for soprano, women's choir and chamber orchestra by Krzysztof Penderecki, completed in 2018, setting the liturgical text Lacrimosa from the Requiem mass.

Penderecki wrote Lacrimosa No. 2 on a commission by the Pomeranian Philharmonic. He set the liturgical text Lacrimosa from the Requiem mass which he had set first in his Polish Requiem, [1] for a soprano soloist, women's choir and chamber orchestra. The world premiere was performed on 10 October 2018, [2] on the occasion of the unveiling of the Monument to the Victims of the Pomeranian Crime of 1939  [ pl ] in Toruń, Poland, by soprano Iwona Hossa  [ pl ], the Chór Żeński Uniwersytetu Technologiczno-Przyrodniczego, and the Pomeranian Philharmonic, conducted by Kai Bumann.. [3] It was published by Schott. The duration is given as two minutes. [3] [2] 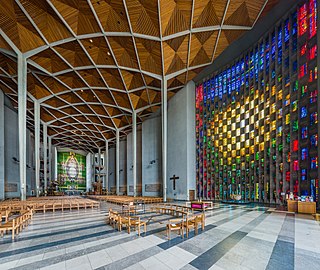 A Requiem or Requiem Mass, also known as Mass for the dead or Mass of the dead, is a Mass offered for the repose of the soul or souls of one or more deceased persons, using a particular form of the Roman Missal. It is usually, but not necessarily, celebrated in the context of a funeral.

Gabriel Fauré composed his Requiem in D minor, Op. 48, between 1887 and 1890. The choral-orchestral setting of the shortened Catholic Mass for the Dead in Latin is the best-known of his large works. Its focus is on eternal rest and consolation. Fauré's reasons for composing the work are unclear, but do not appear to have had anything to do with the death of his parents in the mid-1880s. He composed the work in the late 1880s and revised it in the 1890s, finishing it in 1900.

Valentyn Vasylyovych Sylvestrov is a Ukrainian composer and pianist, who plays and writes contemporary classical music. 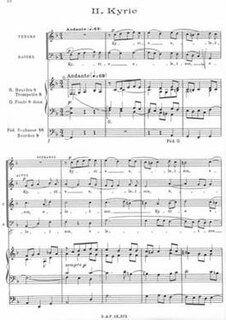 The Requiem, Op. 9, is a 1947 setting of the Latin Requiem by Maurice Duruflé for a solo voice, mixed choir, and organ, or orchestra with organ. The thematic material is mostly taken from the Mass for the Dead in Gregorian chant. The Requiem was first published in 1948 by Durand in an organ version.

John Rutter's Requiem is a musical setting of parts of the Latin Requiem with added psalms and biblical verses in English, completed in 1985. It is scored for soprano, mixed choir and orchestra or chamber ensemble.

The Music for the Requiem Mass is any music that accompanies the Requiem, a Mass in the Catholic Church for the deceased. It has inspired a large number of compositions, including settings by Mozart, Berlioz, Donizetti, Verdi, Bruckner, Dvořák, Fauré and Duruflé. Originally, such compositions were meant to be performed in liturgical service, with monophonic chant. Eventually the dramatic character of the text began to appeal to composers to an extent that they made the requiem a genre of its own, and the compositions of composers such as Verdi are essentially concert pieces rather than liturgical works.

Requiem für einen jungen Dichter is an extended composition by Bernd Alois Zimmermann, written from 1967 to 1969 for two speakers, soprano and baritone soloists, three choirs, jazz band, organ, tapes and a large orchestra. Subtitled Lingual, it sets a text that includes the Latin liturgical Mass for the Dead and literary, philosophical, religious and political texts, related to politics and the history of mind during the composer's life. The work has elements of a cantata, an oratorio and an audio play.

Kai Bumann was a German conductor who led orchestras and opera companies mainly in Poland, such as the Opera Krakowska, Warsaw Chamber Opera and the Polish Baltic Philharmonic. He was conductor and artistic director of the Swiss National Youth Symphony Orchestra (SJSO) from 1998 until his death.