Die schwarze Maske (The Black Mask) is an opera by composer Krzysztof Penderecki using a German libretto by the composer and Harry Kupfer which is based on a 1928 play by Gerhart Hauptmann. The opera premiered at the Salzburg Festival on 15 August 1986, after which there were productions mounted at the Vienna State Opera and the Great Theatre, Warsaw during the following opera season. The work had its United States premiere on 30 July 1988 at the Santa Fe Opera with a cast that included Mark Lundberg.

Opera is a form of theatre in which music is a fundamental component and dramatic roles are taken by singers. Such a "work" is typically a collaboration between a composer and a librettist and incorporates a number of the performing arts, such as acting, scenery, costume, and sometimes dance or ballet. The performance is typically given in an opera house, accompanied by an orchestra or smaller musical ensemble, which since the early 19th century has been led by a conductor. Although musical theatre is closely related to opera, the two are considered to be distinct from one another. 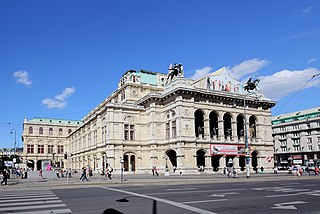 The Vienna State Opera is an opera house and opera company based in Vienna, Austria. The 1,709-seat Renaissance Revival venue was the first major building on the Vienna Ring Road. It was built from 1861 to 1869 following plans by August Sicard von Sicardsburg and Eduard van der Nüll, and designs by Josef Hlávka. The opera house was inaugurated as the "Vienna Court Opera" in the presence of Emperor Franz Joseph I and Empress Elisabeth of Austria. It became known by its current name after the establishment of the First Austrian Republic in 1921. The Vienna State Opera is the successor of the Vienna Court Opera, the original construction site chosen and paid for by Emperor Franz Joseph in 1861. 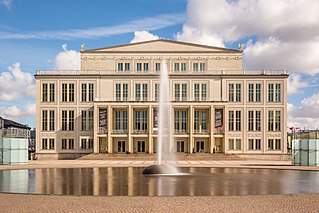 The Leipzig Opera is an opera house and opera company located at the Augustusplatz in Leipzig, Germany.

Henry Maske is a German former professional boxer and one of Germany's most popular sports figures. He held the IBF light heavyweight title from 1993 until 1996.

Heinrich Sutermeister was a Swiss composer, most famous for his opera Romeo und Julia. 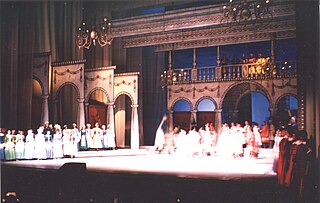 Heinrich Proch was an Austrian composer.

Georg Jarno was a Hungarian composer, mainly of operettas.

Mark Lundberg was an American opera singer who had an active international career from the 1980s up until his sudden death in 2008. He began his career as a bass, then progressed to portraying baritone parts, and finally settled as a dramatic tenor, winning acclaim portraying Wagnerian heroes like Siegfried, Tristan and other standards of the dramatic repertoire. Samson from Saint-Saëns's Samson and Delilah and the title role in Giuseppe Verdi's Otello became "calling cards" for him. Standing at six and a half feet and possessing a big frame and a dark beard, Lundberg made a striking figure on stage. His shoulders measured 6 and a half feet around and the Denver Post once Described as "a big blonde bear of a man", a fitting description for such a large man

Marilyn Tyler was an American soprano and music pedagogue.

Albin August Heinrich Emil Swoboda was an Austrian operatic tenor, actor, and opera director of German birth. One of the most famous opera singers of the "Golden Age" of Viennese operetta, he was a leading tenor and dramatic stage actor at the Theater an der Wien from 1859–1878. He notably appeared in the world premieres of operettas by composers Jacques Offenbach, Johann Strauss II, and Franz von Suppé. He also appeared in musical comedies and plays in Vienna, and appeared in stage productions of all kinds as a guest artist in theatres in Germany, Hungary, Poland, and Russia. His son Albin Swoboda Jr. also had a successful career as an opera singer. In 1955 a street in the Hietzing district of Vienna was named after him.

Marij Julij Kogoj was a Slovenian composer. He was a pupil of Schoenberg and Franz Schreker, and immensely popular during the 1920s, culminating with his opera Črne maske. His career ended in 1932, when he was institutionalized for schizophrenia. He remained there until his death in 1956.

The Black Spider is an opera in three acts by Judith Weir with a libretto by the composer. The work is loosely based on the 1842 novella Die schwarze Spinne by Jeremias Gotthelf.

Aladár Radó was a Hungarian composer of classical music.

Ursula Boese was a German operatic contralto. A member of the Hamburg State Opera from 1960 to 1993, she pursued an international career. She appeared as Stravinsky's Iocaste at the San Francisco Opera in the presence of the composer, as Wagner's Fricka in Wieland Wagner's last production of the Ring Cycle at the Bayreuth Festival, and as Verdi's Ulrica alongside Luciano Pavarotti.