The Dream of Jacob

The Dream of Jacob, also referred to as The Awakening of Jacob [1] [2] (Polish : Przebudzenie Jakuba), is a composition by Polish composer Krzysztof Penderecki. It is scored for large orchestra and was finished in 1974.

The work's original German title, Als Jakob erwachte aus dem Schlaf, sah er, daß Gott dagewesen war. Er hat es aber nicht gemerkt (Jacob woke from his sleep and said: Truly the Lord is in this place, and I did not know it), [1] [3] is extracted from the Bible and can be found in Genesis28:16. The work was commissioned for the Silver Jubilee of Prince Rainier III of Monaco, to whom it is dedicated, and was first performed in Monte Carlo on 14 August 1974, by the Orchestre National de l'Opéra de Monte-Carlo under Stanislaw Skrowaczewski. [4] [5] It was eventually published by the Polish Music Publishing House and Schott Music. [2] [6]

The composition is scored for three flutes, three oboes, three B clarinets, three bassoons (ten woodwind players also double on ocarinas), five F horns, three B-flat trumpets, three trombones, one tuba, percussion and a large string section. [6] The composition is loosely based on the Bible passage mentioned above, therefore trying to resemble being in the desert on a ladder to heaven, while the angels are ascending and descending. [1]

The composition is in one movement and takes approximately 7 minutes to perform. The score is notated in C. [6] This composition is still one of the most performed in its repertoire and also the composition with which Penderecki introduced his neo-Romantic style, which he further developed in his following works, [5] moving away from the style he had been using for the previous 15 years, which included the composition of his first symphony. [7]

The composition received initially mostly positive reviews from Polish and European critics. [2] In the Polish literary magazine Kultura Paryska, the composition is praised for the elimination of "aggressive sound effects and terseness of form" in favor of a more refined style. [8] German music critic Detlef Gojowy described the compositions as bearing strong influences of Richard Wagner and Dmitri Shostakovich. [9] Andrew Porter, from The New Yorker , was also struck by the composer's exquisite use of the twelve ocarinas. [10] However, Polish magazine Ruch muzyczny stated that The Dream of Jacob did not "fulfill the emotional expectations of the German audience”, but the logic and clarity used in its composition was heartily welcomed. [11] Bernard Holland, from the New York Times , highlighted that the Kraków Philharmonic's performances were reviewed favourably, but also noted that the people "would eventually tire of the riveting sounds in his works and begin to wonder why its musical ideas do not flow together more effectively". [12] Penderecki was also criticized by the Jerusalem Symphony Orchestra for the difficulty of the notation. [13] and June Schneider, from Music and Musicians, questioned if the composer "is able to provide anything other than superficial sound manipulations". [14]

The Dream of Jacob has been featured in other audiovisual material. The following is a list of the movies and video games in which the composition is featured:

Following are some of well-known recordings of this piece:

The Symphony No. 8 "Lieder der Vergänglichkeit" by Krzysztof Penderecki is a choral symphony in twelve relatively short movements set to 19th and early 20th-century German poems. The work was completed and premiered in 2005. The symphony has an approximate duration of 35 minutes. Penderecki revised the symphony in 2007 by adding a few more poem settings and the piece has expanded to around 50 minutes. Although given the designation Symphony No. 8, it was not actually the final symphony Penderecki completed before his death in March 2020; the Sixth Symphony, begun in 2008, was not completed until 2017.

De natura sonoris is the title of three works by the Polish composer Krzysztof Penderecki. 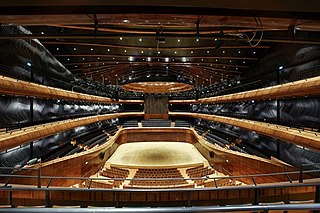