The composition was conceived and written in 1958 and won the second prize at the Polish Composers Union Young Composers Competition, in April 1959. It would eventually be premiered on September 7, 1961, at the Darmstadt International Summer Courses for New Music. Michael Gielen conducted the Southwest German Radio Symphony Orchestra for its premiere. It was dedicated to Tadeusz Ochlewski and was published by the Polish Music Publishing House and the Moeck Musikinstrumente + Verlag. [1]

Emanations is scored for two string orchestras that are tuned a minor second apart. It takes approximately 7 minutes to perform and features the sound-painting compositional style that became a well-known trait of his works from the 60s and 70s, until his first symphony. [2] [3]

De natura sonoris is the title of three works by the Polish composer Krzysztof Penderecki.

Paweł Przytocki, is a Polish conductor of classical music. 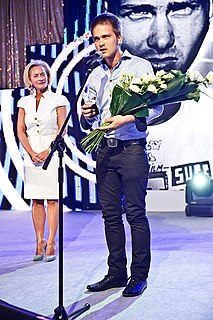