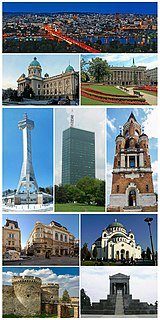 This article deals with the system of transport in Belgrade, both public and private. 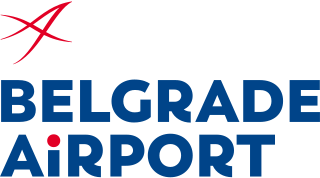 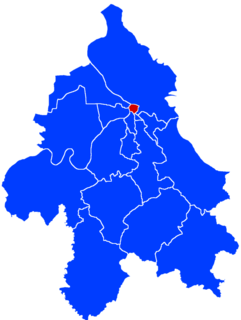 Petar Lubarda was a Serbian and Yugoslav painter. 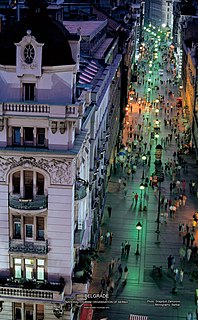 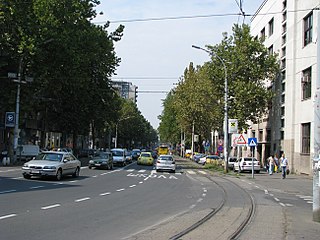 Dorćol is an urban neighborhood of Belgrade, the capital of Serbia. It is located in Belgrade's municipality of Stari Grad.

The Nikola Tesla Museum is a science museum located in the central area of Belgrade, the capital of Serbia. It is dedicated to honoring and displaying the life and work of Nikola Tesla as well as the final resting place for Tesla. It holds more than 160,000 original documents, over 2,000 books and journals, over 1,200 historical technical exhibits, over 1,500 photographs and photo plates of original, technical objects, instruments and apparatus, and over 1,000 plans and drawings.

Princess Ljubica's Residence is a palace located in Belgrade, the capital of Serbia. Because of its cultural and architectural importance the residence has been designated a Monument of Culture of Exceptional Importance.

Aleksandar Palas Hotel is a hotel located in Belgrade, the capital of Serbia.

The Museum of Yugoslavia is a public history museum in Belgrade, the capital of Serbia. It chronicles the period of Kingdom of Yugoslavia and Socialist Yugoslavia as well as the life of Josip Broz Tito. Tito's grave is located in one of the Museum buildings.

Tatjana Ilic – Tanja Ilic is a fine artist. She graduated from the Faculty of Fine Arts - Majoring in graphics in Belgrade in 1995. During her studies she enrolled at the Düsseldorf Arts Academy in the class of Jannis Kounellis, section Bildhauerei. On the recommendation of her professor, she acquired a Master's status in 1997, and continued to work in the same class until 2000. She has been a member of the Association of Fine Artists of Serbia since 1995. She has also been a member of the International Artists Forum since 2003. In the same year her artwork "Vogel" was incorporated into the analytical review "Performance - Art - Kontext".

Nikola Prsendic is a contemporary artist and painter, currently based in Veliko Gradište, Serbia. 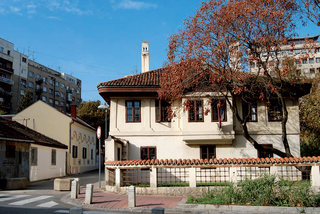 The cultural-historical complex in the area around Dositej's Lyceum is one of the oldest and most important city parts in Belgrade, which centre formed at the end of the 18th and beginning of the 19th century. 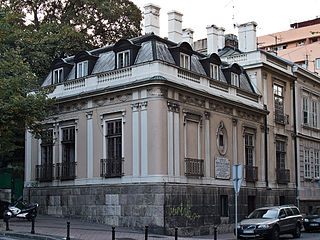 Nikola Pašić's House is located at 21 Francuska Street, in Belgrade, the capital of Serbia. Originally built in 1872 and thoroughly expanded in 1921, it was purchased by the longtime prime minister Nikola Pašić in 1893. It was declared a cultural monument in 1984.

Nikola Nestorovic was a Serbian architect and professor at the Technical Faculty.