This list of table tennis players is alphabetically ordered by surname. The main source of the information included in this page is the official International Table Tennis Federation (ITTF) database. More detailed information about their careers is available in the individual players' articles, and in the ITTF database.

Only table tennis players included in the ITTF database who achieved at least one medal in one of the considered competitions can be listed here. A picture of players who achieved an Olympic gold medal in a single event is shown.

The name of each player is preceded by the flag of all the countries for which the player has competed. Each player is listed with their achievements in the single event of the considered competitions. Members of the ITTF Hall of Fame are listed in bold. [1] [2] [3] [4] [5] [6] [7] [8]

The considered competitions and the related achievements to be listed in this page are: 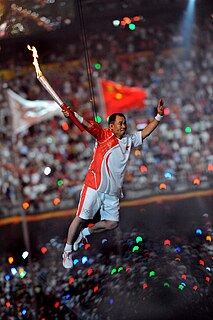 Li Ning is a Chinese retired gymnast, billionaire entrepreneur, and the founder of the eponymous sportswear company Li-Ning.

Jean-Michel Saive is a former professional table tennis player from Belgium. Saive competed at seven consecutive Olympics between 1988 and 2012, and he was also a winner in singles at European Championship 1994. 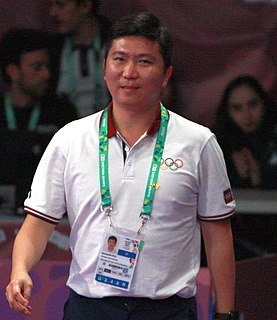 Ryu Seung-min is a Korean table tennis player who won the gold medal at the 2004 Summer Olympics in the men's singles competition. His opponent was Wang Hao, a top-seeded player from Chinese national team. Along the way, he defeated 1992 Olympic champion Jan-Ove Waldner with 4–1. At the 2008 and 2012 Summer Olympics he was part of the South Korean team that won the bronze and silver medals respectively. Ryu is ranked twenty-fifth in the world as of July 2013.

Vincenzo Maenza was an Italian Greco-Roman wrestler. He won two gold medals and a silver medal at the 1984, 1988, and 1992 Olympic Games. 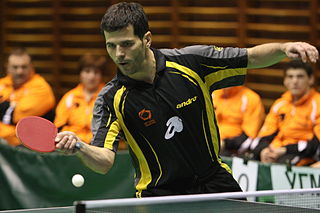 Yoo Nam-kyu is a male former table tennis player from South Korea who competed in the 1988, the 1992 and in the 1996 Summer Olympics.

Feng TianweiPJG is a Singapore table tennis player. She moved to Singapore under the Foreign Sports Talent Scheme in March 2007 and commenced her international career in competitive table tennis the following month. 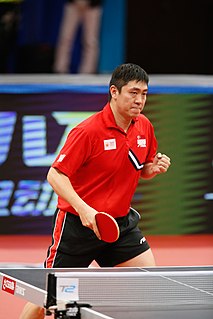 Gao Ning is a Chinese-born Singaporean table tennis player. He is considered Singapore's best male player with a world ranking of 34 as of August 2016. He was first in men's singles at the 2007 Commonwealth Table Tennis Championships. In 2018, Gao won the men's singles as well as the mixed doubles at the Commonwealth Games along with Yu Mengyu.

The Florida Gators swimming and diving program represents the University of Florida in the aquatics sports of swimming and diving. The program includes separate men's and women's teams, both of which compete in Division I of the National Collegiate Athletic Association (NCAA) and the Southeastern Conference (SEC). The Gators host their home meets in the O'Connell Center Natatorium on the university's Gainesville, Florida campus, and are currently led by head swimming coach Anthony Nesty and diving coach Bryan Gillooly. Since Florida's swim and dive program was established in 1930, the men's team has won forty SEC team championships and two NCAA national championships. Since the NCAA and the SEC began sanctioning women's swimming in 1981, the Lady Gators have won seventeen SEC team championships and three national championships. 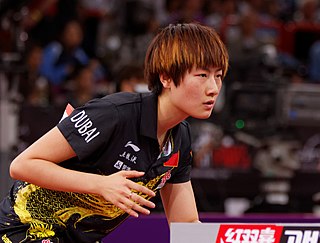 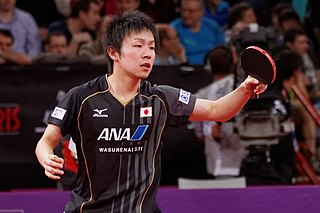 Koki Niwa is a Japanese male table tennis player. He is the gold medalist at the 2010 Youth Olympics and he won the World Junior Table Tennis Championships in 2010 (doubles) and 2011 (singles).

Tammy Leibl is a retired American female indoor volleyball and beach volleyball player. She played college volleyball at Arizona State University and won the bronze medal with the U.S. national team at the 1992 Summer Olympics.